A new tease for Legendary Pokemon Necrozma in Pokemon Ultra Sun and Moon have been provided by Nintendo.

Players will find out more on this rather interesting Pokemon and the “secrets its holds” as they adventure across Alola. The brightness of the Pokemon probably has something to do with it having “stolen the light” of Ultra Megalopolis which is accessed through an Ultra Wormhole. 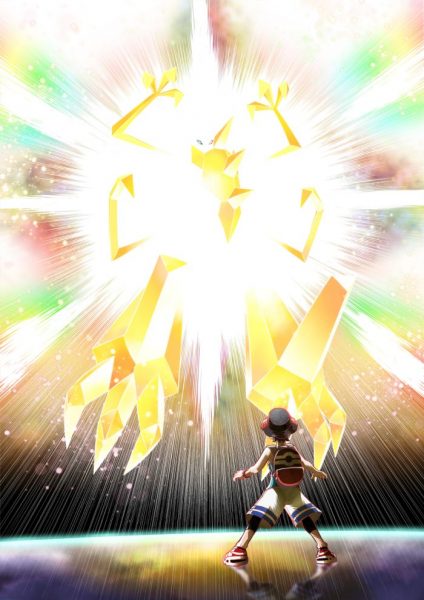 Additionally, Nintendo provided a few more details on how Trainers can use Battle Points to teach their Pokemon moves which cannot be learned by leveling or TMs.

These Battle Points can also earned by winning battles in battle facilities such as the Battle Royal Dome and the Battle Tree, or by using Mantine Surf from various beaches.

Moves can be taught to Pokemon traveling with them and to Legendary Pokemon that Trainers catch passing through the Ultra Wormhole.

A new facility recently detailed, the Battle Agency, was announced previously as one where players can rent Pokemon for battling. Here, players can take part in Single Battles using rental Pokemon. They’ll have three such Pokemon to command as they try to defeat the three Pokemon in their opponent’s team. As players progress through these rental battles, they will earn items such as Gold Bottle Caps. A larger pool of Pokemon will be made available to rent as the battles increase and players mingle with other players locally or through the Nintendo Network.