Capcom has released more information on Monster Hunter World, and this time it pertains to the Palico Tool, house pets and the Health Mantle.

The second drop of information on Monster Hunter World this week sounds rather interesting, especially for Palico fans.

Earlier this week, we learned about Squads, which are the game’s version of guilds, and now we know more about pets and the rather helpful sounding Health Mantle.

For those interested in pets, there are various creatures roaming about the world which can be capture. Players can them release the creatures into their House, and depending upon the home’s grade, the amount of and variety of pets will expand or change, according to Gematsu.

As you already know,  Felyne Palicoes can also be customized, but there will a tool which will make these companions more helpful when hunting monsters. This tool is called a Cheer Instrument and it allows the player to use various sounds to produce effects.

Some will increase attack power, or provide additional resistance to effects. As players become more proficient with the instrument,  they will be able to play more sounds and the effects will also be enhanced.

The Health Mantle in Monster Hunter World was also touched upon by Capcom. One of the pieces of special equipment in the game,  the  Health Mantle absorbs a specific percentage of damage when the player is attacked.

Should the damage output by a monster exceed the fixed percentage, the effect will disperse. Special equipment has a cool down so, keep that in mind when using.

You can get a complete rundown of all the Monster Hunter World news through Arekkz’s video above. In it, he also discusses the return of egg quests, Elder Dragons and plenty more. 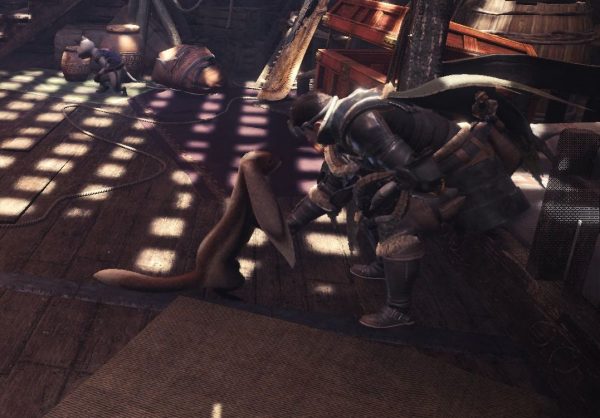 Monster Hunter World releases on January 26 for PS4 and Xbox One, and will be made available on OC sometime later. The PC version hasn’t been dated.

PlayStation Plus members will be able to participate in the Monster Hunter World beta on PS4 December 9-12.