According to Ubisoft, the firm has benefited from a 100% sales growth for Assassin’s Creed Origins, compared to Syndicate which released in 2015.

The percentage stated by Ubisoft CEO Yves Guillemot was on a comparable basis of units, and internal estimates based on 10 days of sales for both Assassin’s Creed titles. For clarification, this means sales for the newest entry were double that of the previous release.

“Given longer development lead times, our talents can fully express their creative visions and therefore maximize the potential of our games,” said Guillemot in Ubisoft’s Q2 FY18 financials for the period ending September 30.

“The success of these releases – notably the 100% sales growth for Assassin’s Creed Origins – combined with solid live operations demonstrate that Ubisoft is ideally positioned to deliver further growth in future fiscal years.” 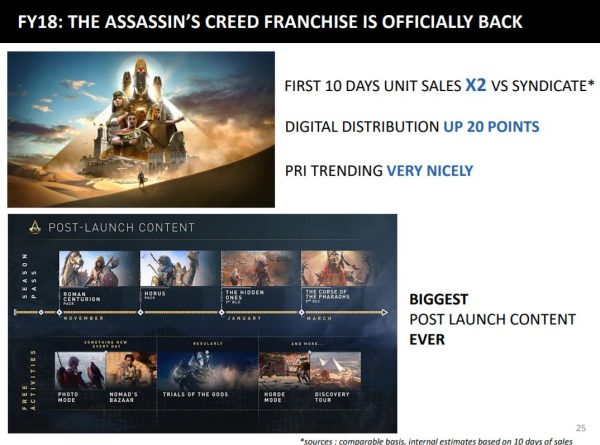 Comparing digital and retail skus, approximately 35% of Assassin’s Creed Origin release copies were digital, compared to 15% for Syndicate which is a 20% increase.

Revenue from digital sales in general for the company during Q2 2017 were up 69.1% to €342.6 million. Extra content from DLC and microtransactions were up 82.9%, contributing €174.5 million to digital revenue.

Almost half of all current sale for South Park: The Fractured but Whole were digital, and the game has sold faster than its predecessor. Rainbow Six Siege continues to grow with 25 million players, and Ubisoft saw an uptick in new For Honor players thanks to the most recent free weekend. 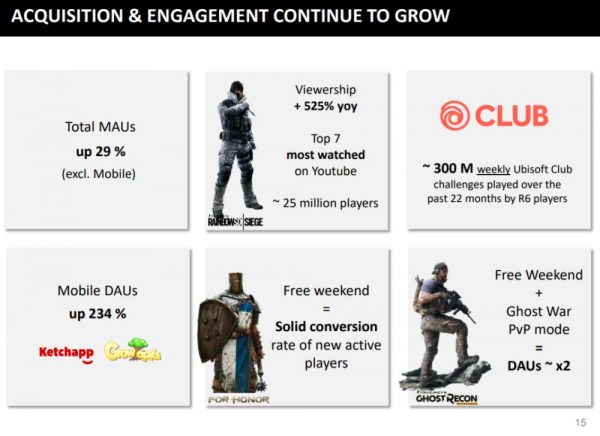 Broken down by platform, 31% of Q2 game sales were for Play Station 4, 20% for Xbox One, 19% from Switch titles, and 15% from PC. Last-gen console and mobiles sales accounted for the remaining 15%.