You will soon be able change your hair and scruff in Assassin’s Creed Origins on PC – and you already can on consoles.

Assassin’s Creed Origins players on PC will be pleased to know they will soon be able to customize their appearance a bit more.

Xbox One and PlayStation 4 players are able to change Bayek’s hairstyle and facial hair using the controller. But it’s a no go for PC users who prefer to go the mouse and keyboard route. And apparently, the ability to change his look wasn’t supposed to be included at release.

According to Ubisoft, customizing Bayek’s hair and beard was a left over as part of a developer tool, which is why it can only be activated by a controller. PC users can still use this option, but only with a controller.

After Bayek meets up with his wife Aya in the game, and she gives him a shave and a haircut, using an Xbox One controller, players can toggle his hair and beard using LT+Y and RT+Y. On PS4, it’s R2/L2 + Triangle. 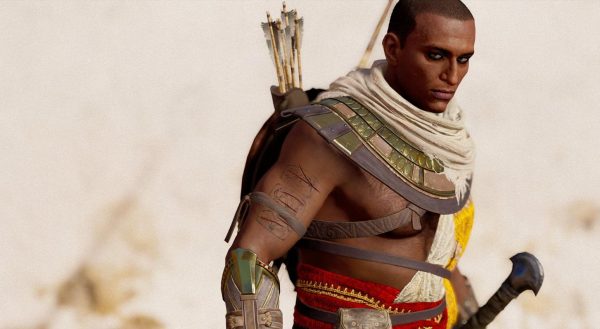 Over on the Ubisoft forums, the community manager said the Assassin’s Creed Originss team is currently working on adding this feature on PC.

“It will be implemented with an upcoming Title Update and you’ll also be able to keep your selected preferences across a play session,” reads the post.

For those who like a bit of scruff, you’ll soon be in luck, then.