At E3 2017 Nintendo revealed The Legend of Zelda: Breath of the Wild DLC Pack 2, The Champion’s Ballad along with the amiibo. Now, we now what each amiibo will contribute to gameplay.

Nintendo has announced gameplay elements which will provided by the Champion amiibo set for The Legend of Zelda: Breath of the Wild DLC Pack 2, The Champion’s Ballad.

The Champion amiibo, which release on November 10, are: Daruk, Mipha, Revali, and Urbosa. All characters will make an appearance in The Champion’s Ballad DLC.

Using the amiibo, when any of the Divine Helms are equipped with Ancient Cuirass and Ancient Greaves, players will trigger a set bonus called Ancient Proficiency, according to Nintendo. This will increase the attack power of Ancient or Guardian series weapons.

All will increase guard from ancient energy attacks. Defense level and required materials for level-up are the same as those of Ancient Helm.

Remaining HP/full HP on enemies will also be visible like the Champion’s Tunic. 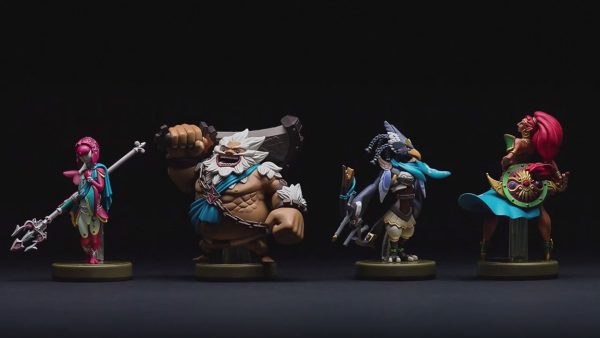 Here are the specific effects for each item:

Each of the Champion amiibo will run you $15.99 each or the regional equivalent. The bundle will run you about $64, depending on the retailer.

The Champion’s Ballad will be released in December and is part of The Legend of Zelda: Breath of the Wild Expansion Pass. The pass will set you back $19.99.