This all feels rather familiar.


For its twenty-third instalment, Need for Speed owes a lot to its entertainment industry peers. From its mishmashed ‘crew’ of vigilantes to the comic book greed and corruption of its super villains its narrative is every bit The Fast and the Furious, whilst its gameplay features the vehicular violence across an open-world that was a benchmark of Burnout in its later years. It’s a post-modern construction befitting our multimedia-driven world.

Having played Need for Speed Payback for a few hours at this point, I am consumed by the feeling that it is indeed a work of collage rather than genuine individuality. Its spectacular set-pieces, obsession with collectibles and a wholly unrealistic handling model designed to promote impossible driving techniques are things that we’ve seen before. 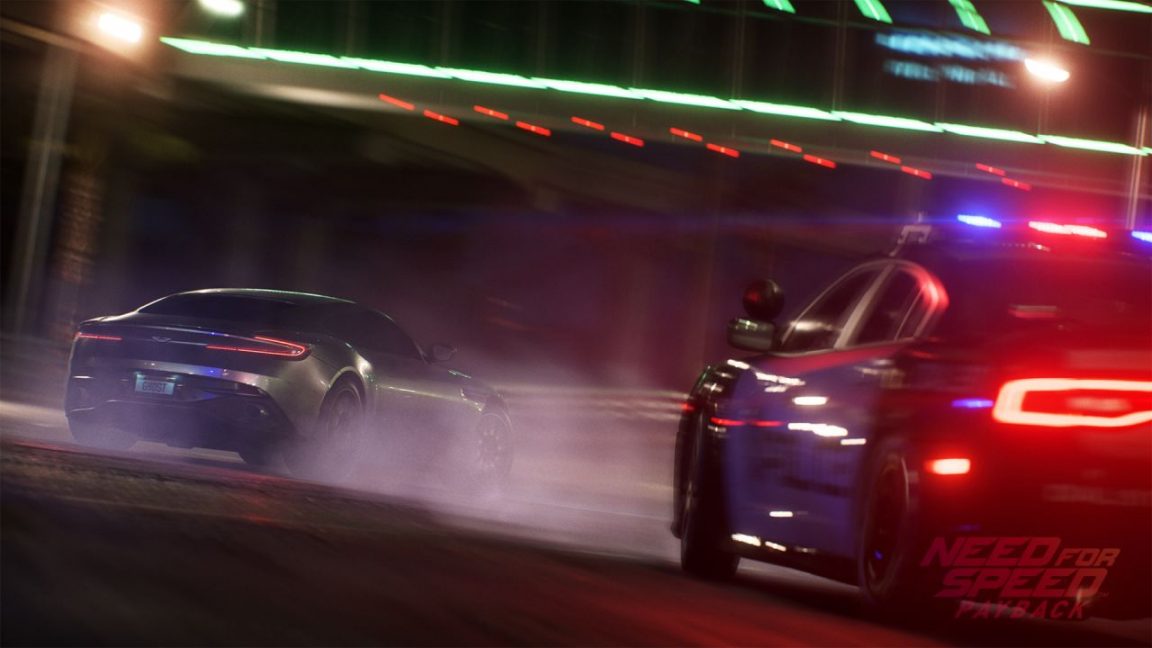 As with Star Wars Battlefront 2, Payback’s EA stable-mate, the goal here is to seemingly provide something harbouring an accessible, recognisable quality as opposed to something altogether original. EA Ghost, Payback’s creator, seems to be on the right track in this regard.

You play as Tyler Morgan, a Paul Walker lookalike desperate to earn big bucks and avoid the rat race of a regular life. He’s out to take down The House, a criminal syndicate running Fortune Valley – the Las Vegas-inspired gambling mecca located somewhere in the American desert. Morgan is a hotshot racer and his way to the heart of The House is through the rigged street races the group operates. Queue hip-hop, burning rubber and people calling each other “bro”.

The narrative foundations are shallow and harbour a strong potential to feel overly-familiar once more hours have been spent behind the wheel, but that’s to be expected in a game trying to achieve so much diversity through its gameplay. Too complex a narrative and it becomes impossible for EA Ghost to tie all of its interactive elements together.

Story missions are undertaken at a pace of your own choosing, allowing you to indulge at will in Payback’s smorgasbord of activities. Street and off-road races, destroying difficult to reach billboards, finding and rejuvenating old wrecks, tuning and customising your cars, average and top speed challenges and more are here to claim victory over. My time so far has seen a ratio somewhere in the region of 3:1 in favour of completing these types of objectives over engaging in the main story. 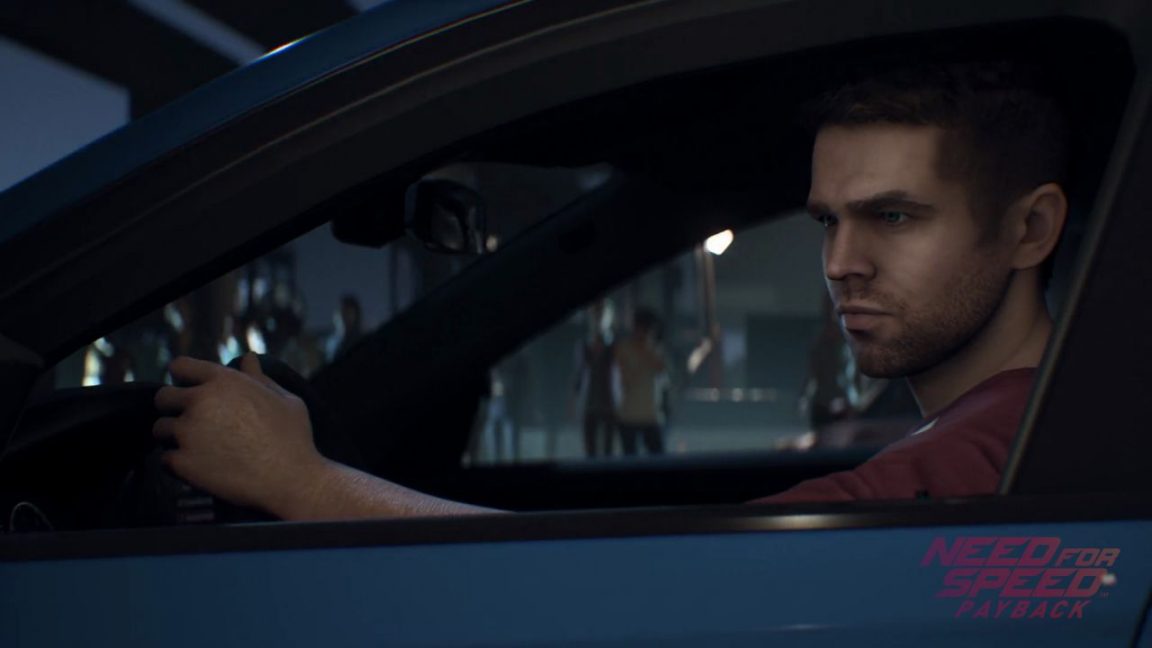 Whilst we’ve seen these ideas before, not least in EA’s own Burnout Paradise, the quality of the environment means that they feel like an aspiration to achieve rather than a chore to tick off. Fortune Valley itself largely adheres to an American grid system of interlocking roads and right-angled corners, with the flashy casino district flanked by residential areas both affluent and poor as well as more traditional commercial centres featuring shopping districts so grand they’re surely offerings to the consumerist gods. Overhead raised highways allow you to make good use of the in-built NOS boost that all cars seem to be pre-packaged with, whilst open desert meets you at the city boundaries.

The desert is made up of country lanes and longer, straight roads, with gas stations (drive through them to repair your car, a la Burnout), dilapidated barns and even an airfield dotted across the vista. It’s the kind of place that you want to explore in a car, the environment harbouring every dream associated with the western section of Route 66.

Of course, Payback’s world is an exaggeration of the real thing. Like its gameplay elements, there’s little new about what’s presented here but the larger than life way it’s condensed and thrown at you gives it something of a dream-like vibe.

Visual impact is helped by the fact that the whole thing is built upon the Frostbite engine, the framework that EA DICE created for Battlefield but has since been rolled out for FIFA, Madden, Battlefront and Mass Effect. This not only provides a constantly smooth frame rate, it also gives greater detail to everything from tracks left on the dirt to the wrinkles in each character’s face. Certainly, from a technical perspective, no EA racer has ever looked this good.

Whether it feels as good, is a more subjective question. Handling here is very much arcade in nature, with the laws of physics replaced by a desire to provide an instantly gratifying sense of spectacle and control over your wheels. In the right type of car you can drift by simply locking the steering wheel in the relevant direction, whilst braking, acceleration and launching yourself of jumps is more in line with Starsky and Hutch than Einstein or Newton.

Cop cars buzz about you like wasps should they pick up on the scent of illegal activity. They come with a bar that hovers above their roofs that must be depleted by smashing into them, at which point slow-mo kicks in and the camera pans to give you a front row seat as they spin and pivot in the air. 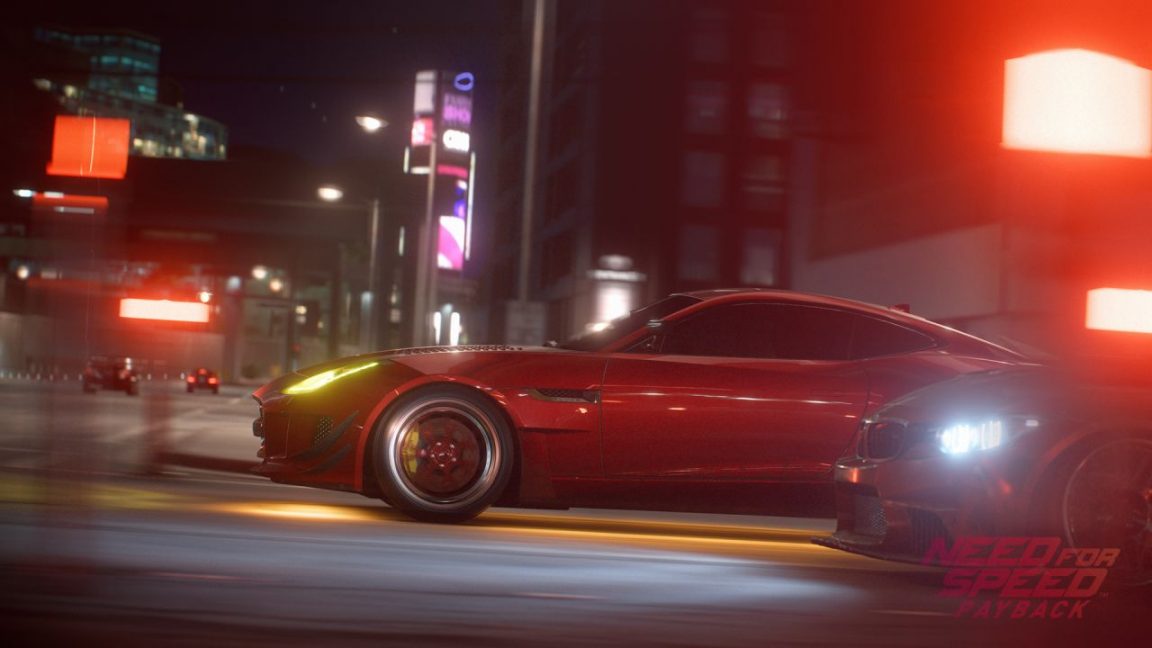 It’s simplistic and easy to drive and dispatch cops, but it is undoubtedly fun to be able to rid yourself of the responsibilities associated with real physics and concentrate instead on achieving whatever crazy idea pops into your head.

The slice of Payback I’ve handled is a very a good old fashioned piece of indulgence and, certainly, it is a different kind of indulgence than Need for Speed has typically focused on. Indulgence can be great in the short term, but in the long term it can feel like a mistake.

Its car are fast and its stunts spectacular, but pacing is about more than speed and excitement. Here’s hoping Payback understands that.