The golden child of Final Fantasy is busted.

Or at least part of it is. Final Fantasy XIV tends to be the focus of praise when we talk about the current status of the series. But the game’s housing system is a disaster, hardly doing the standard other parts of the game have set for it any justice.

Last week Patch 4.1 included the residential housing area, Shirogane, letting players buy or relocate a housing plot. In a brand new housing ward, there are 720 housing plots available divided into 12 wards, each with a subdivision. When you’re on a high population server like Balmung or Leviathan it means you probably aren’t going to have a place for the cute Moogle wallpaper or Paissa dolls. To add to the urgency, housing comes in different sizes and plot grades. The biggest houses only have three per ward, so if that’s your end goal, be prepared for disappointment.

Final Fantasy XIV’s queues and server issues have also been notoriously bad since the launch of Stormblood. Some of that is outside of Square Enix’s control, but for situations like a housing launch no excuse really seems to calm the anger. As I set out to grab my own plot in the new Shirogane district, those queues made for one of the reasons I was unable to meet the mad rush into the server. When you know there’s only 720 plots available and your game launches with “you’re 960th in queue,” it’s over.

Before the server went down for maintenance, I practiced my routine. I bound my sprint key to a more primary button on my keyboard, turned off player names so I wouldn’t misclick them, ran various paths over and over so I could time the fastest. Myself and the dozens of people around me doing the same thing looked absolutely ridiculous, because we were. Instead of spending our time enjoying content we pay for every month, we were running circles to compete with each other over plots of land. It was nightmarish. 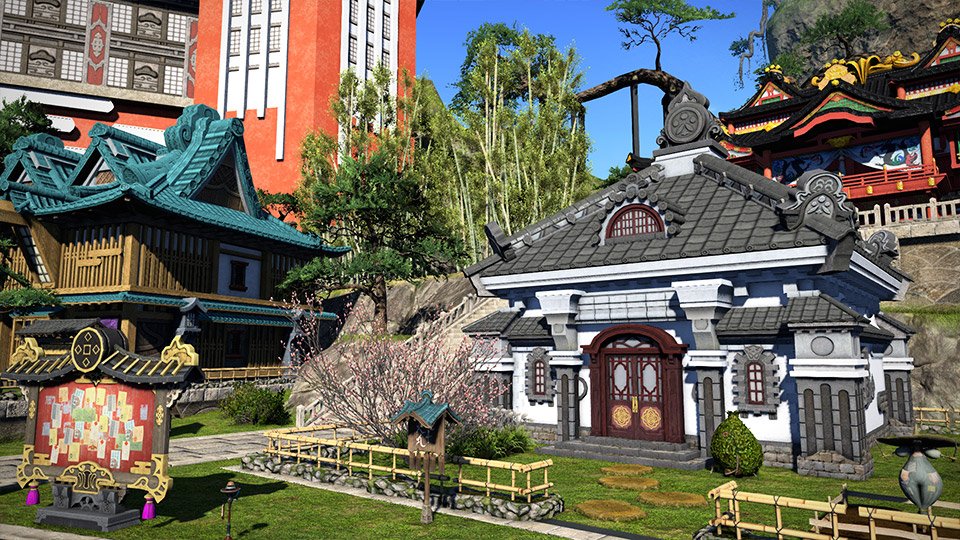 My research went on for hours before the servers went down, and I made sure to logout in the most ideal position with hundreds of other players surrounding me. My panic was fueled by linkshells, forums, discord servers, and Twitter. Everyone on Leviathan wanted a house. As a friend described how his free company had one person going to every ward, each with over 45 million gil for a large house, I knew my own Free Company was doomed. For most groups of players, that’s an impossible feat and ridiculous standard to set.

They got the mansion they set out for, while I wasn’t so lucky myself. I knew there was no chance I was getting a personal house when my free company was priority, so as I frantically made my way into Shirogane I resigned myself to only looking for a new Free Company home. The upside is that I got a small estate just minutes after the servers opened. We wanted a mansion but they were all gone. And in less than 10 minutes after Leviathan opened back up, I couldn’t find a single Shirogane house.

The disappointment overshadowed the enthusiasm of new homeowners. Most of my friends disconnected in the player lobby and never actually made it into the game. Other players were further back in the queue, and by the time they made it on everything was gone. Between my launcher crashing and queue time, I’m surprised I beat them to a small house.

The absurd stories coming out of Final Fantasy XIV’s newest housing district since that morning don’t stop. The players that saved for months working towards their dream home were not only let down, but now must deal with others who’ve bought up plots just to resell. The Final Fantasy XIV housing market on Reddit is full of outrageous examples.

On high population servers like mine, some players are charging upwards of 500 million gil just to relinquish the land for a large Shirogane home. After that, there’s still a 45 million gil charge owed to the game. That means you’re spending well over the amount ever intended by Square Enix for housing, but it’s a system so easily exploited I’m not sure what else they were expecting.

There’s a multitude of ways people have managed to take advantage of the system, too. While players are only allowed one personal house per character, it’s still possible to buy a house for a free company and a personal home. This has led many to create one-man free companies so they can grab two plots instead of one. Those that are lucky enough can relog into the game and do it again on a second character. For the more cruel folks, some players would target characters interacting with free housing plots and initiate a trade. This cancels whatever the buyer is doing and ruins their chances at nabbing a home, leaving it free for the player that opened the trade.

Players were quick to point out that this isn’t new either. It’s what makes the situation so frustrating. Every addition to housing we’ve seen has been abused by players looking to quickly buy and resell, while those with slower connections and a little less luck don’t make it to the neighborhood in time to grab something they’ll actually use. Many have taken their complaints outside the game, blasting Square Enix over an obviously flawed system.

The #FFXIV playerbase is min-maxing their housing routes more than they min-max raid content.

The gross failure and mounting frustration finally garnered a response from director Naoki Yoshida on the official forums. While he acknowledges the game’s housing crisis, it’s hard to imagine how we’re back in this position. The team prepared, however poorly, for the server load and tried to take preventative action against players that would abuse the relocation feature. Yet that system backfired, ultimately causing more more harm than good. Square Enix even mentioned that the servers would not open early, as they typically do after maintenance, in anticipation of the demand.

It’s nice to see Yoshida and his team tackling the issue, but there’s little comfort in addressing this in a manner that feels like too little too late. More wards will be added in all of Final Fantasy XIV’s housing districts for patch 4.2, but how they will prevent players from abusing such a broken system remains to be seen. It’s something that needs to be reevaluated from the ground up.

Housing isn’t high-end raid content. It’s not gated by skill and as long as players can afford it, homes for free companies and personal plots should be accessible. It’s content we’ve all paid for, but in the end, not something we can all enjoy.