Cuphead is rather popular with PC and Xbox One users.

The first game developed by StudioMDHR, Cuphead, has sold over one million units across PC and Xbox One.

Released with great reviews, Cuphead was first announced in 2014, and after several delays finally arrived on September 29. So, in two weeks time, the game moved over one million digital copies.

That’s a fabulous number, and when you add in the $20 price, Cuphead grossed over $20 million which is beyond outstanding.

Cuphead is a classic run and gun action game with a large focus on boss battles where players take on the role as the game’s namesake or Mugman in single-player or local co-op. 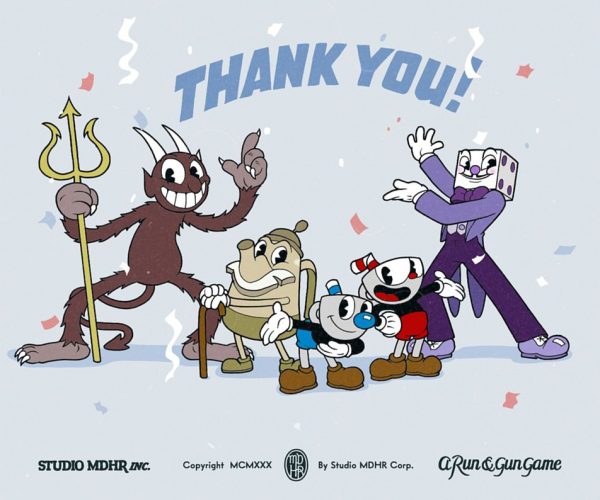 Players will visit strange worlds inspired by 1930s cartoons, learn powerful moves, find interesting weapons and discover secrets in an effort to back a debt to the devil.

As a Xbox One console exclusive, the downloadable game won’t be released on PlayStation 4, but those who don’t own a Microsoft console can pick Cuphead up through Steam or the Windows 10 store for PC.

Cuphead has been on my wishlist for quite a while, and hopefully one day soon I’ll be able to pry the Xbox One controller out of a certain someone’s hands and play the thing. Cross your fingers for me.