Overwatch’s halloween event has coughed up a pile of shiny new skins for our favourite international operatives. Are they any good? Somewhat.

Overwatch’s Halloween Terror event is back, which means the return of some favourite skins from last year. It also means a fabulous new batch of Overwatch Halloween skins, though, and you know what? I have opinions on them.

I do what I want, and what I want to do today is discuss which of these skins are rubbish, and which ones make me feel almost faint with desire to have them in my life even though I play very, very little Overwatch.

Feel free to disagree with me if you like, but know that this will make you incorrect. The correct ranking of this year’s new Overwatch Halloween skins is below. 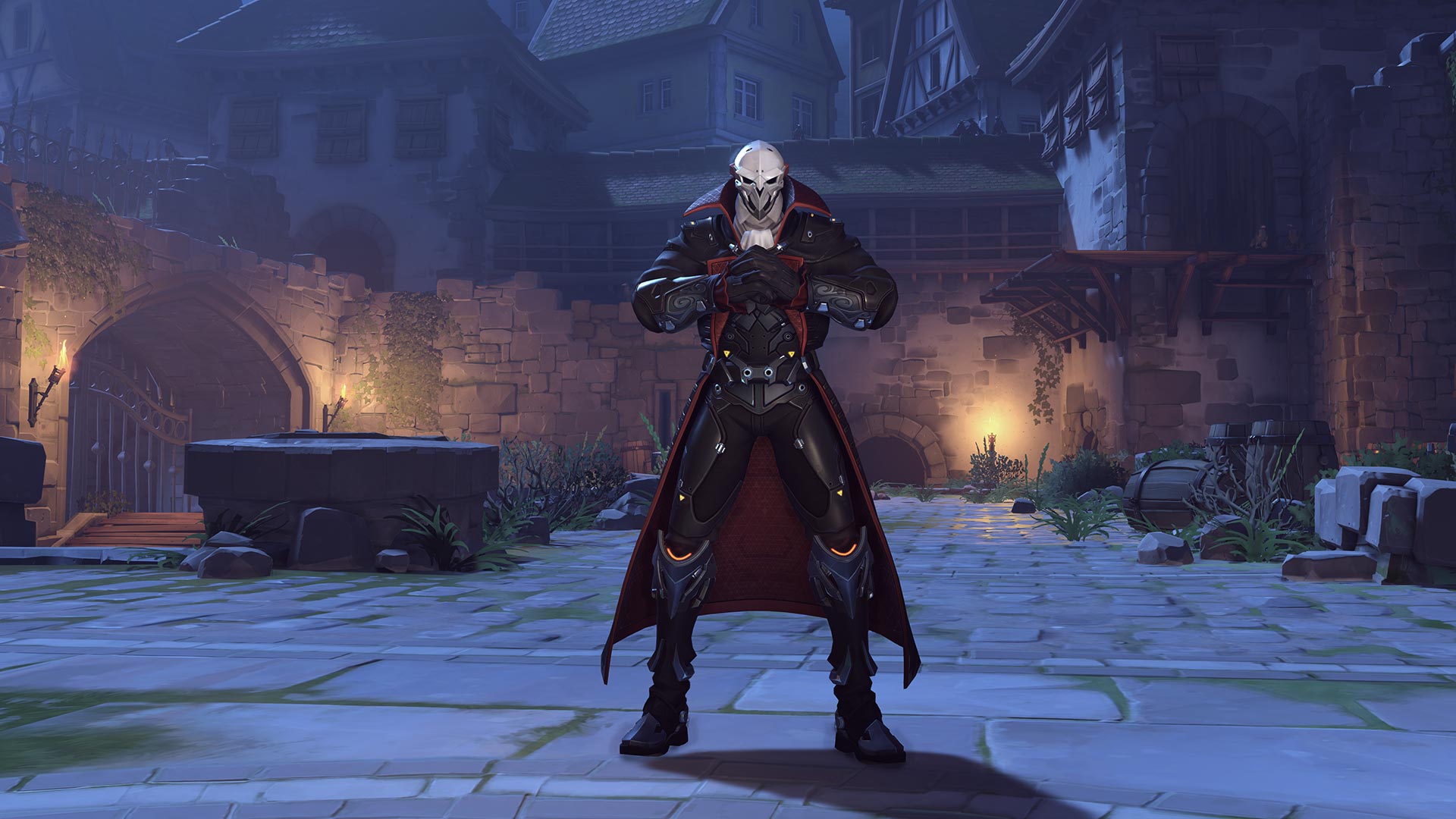 Reaper is Overwatch’s resident edge lord and unfortunately too many people who play him find this authentically appealing rather than ironically hilarious. That means putting him in a ridiculous, fun halloween costume would send them into the sulks, and that’s probably why Blizzard have opted for this incredibly boring skin. Man who usually dresses as a grim reaper is now dressed as Dracula? Is it actually Halloween, or just laundry day?

It’s not even a very good Dracula outfit. If someone turned up to a Halloween party in this ensemble you’d know they ran out of time and ideas and just pulled a coat from their emo phase out of the back of the closet. The gun skin is the best bit, but it does not go far enough to salvage this hot disaster. Bor-ing! 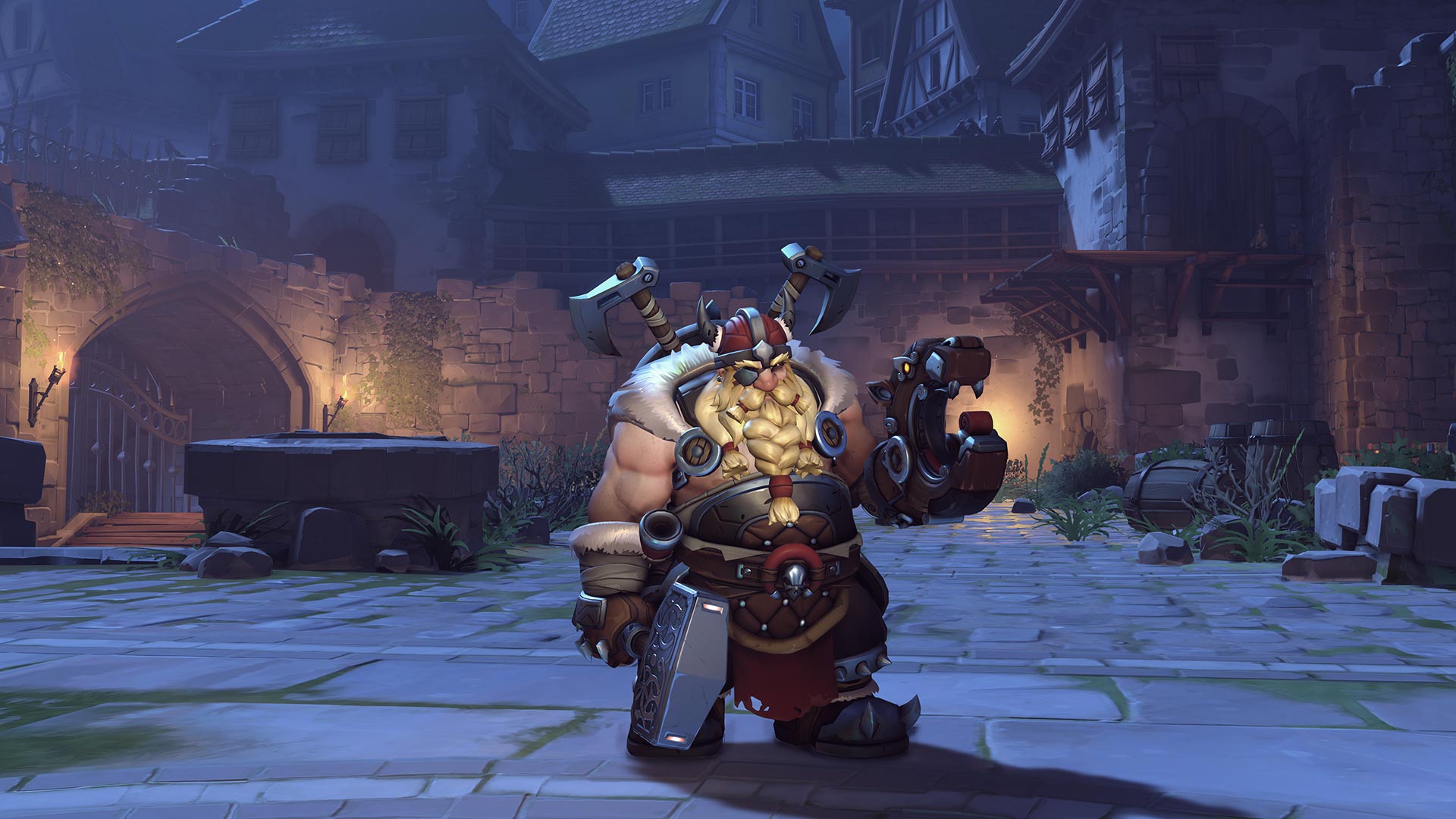 This is not a good skin. Torbjorn’s whole thing is being vaguely viking. Dressing him up as a viking takes about as much imagination as it does to eat a bowl of cereal.

The only reason this one doesn’t come absolute bottom of the pack is that it makes Torbjorn’s hammer look a bit like the Mjolnir wielded by Marvel Cinematic Universe version of Thor, so you can make up a little backstory in your head about how Torbjorn is a huge Marvel fan.

Maybe next year he can come as Iron Man? That seems more on theme with his role as a skilled engineer, right? Plus just picture how cute it would be. Bless. 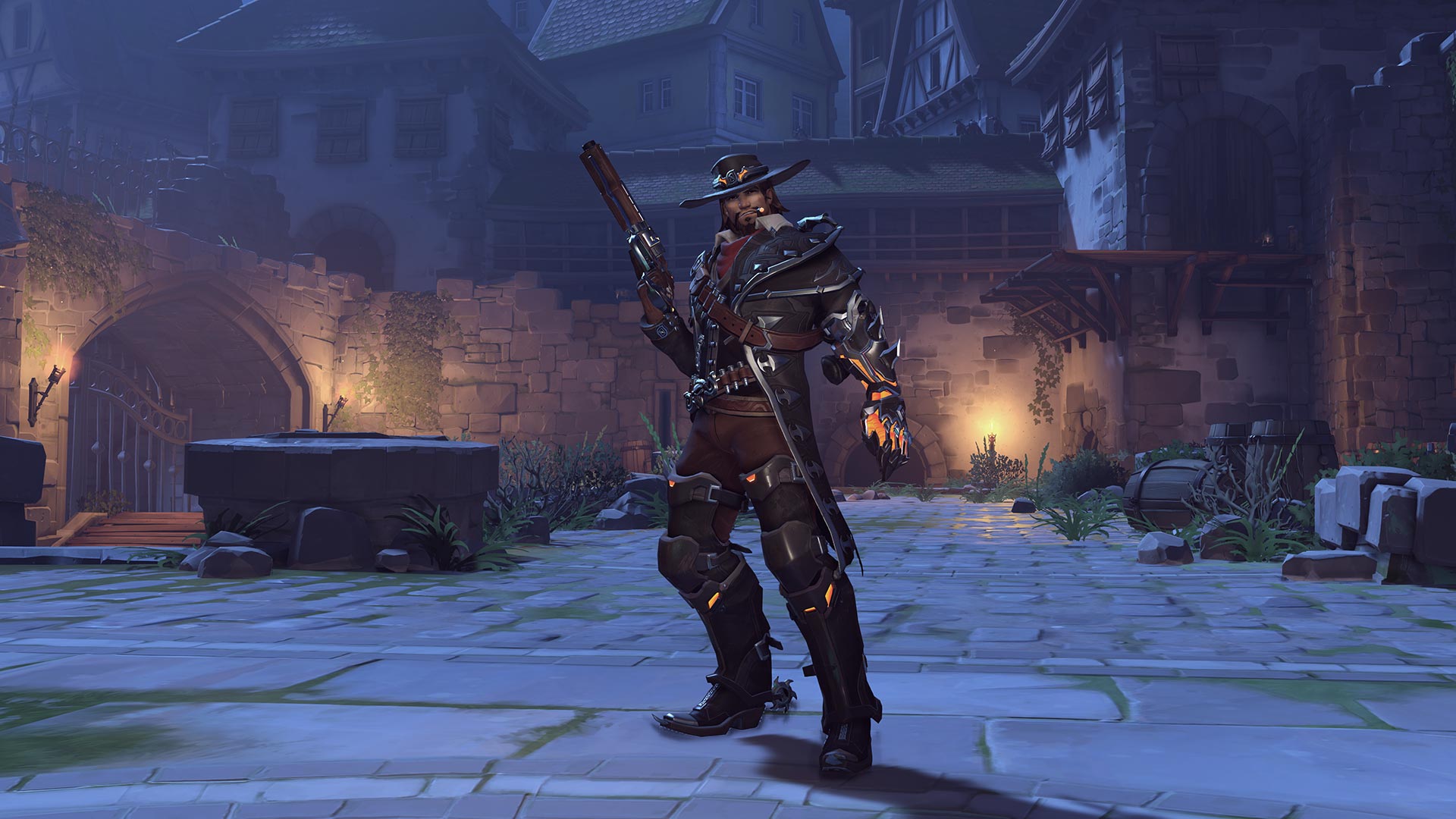 McCree has played to his strengths here, since recent depictions of Van Helsing (the Hugh Jackman movies, the NeoCore games) have convinced us Bram Stoker’s Dutch vampire hunter never went anywhere without a hat, and Wears A Hat is a significant slice of the totality of what McCree is about. Still, if you didn’t know the name of the skin, you’d probably have no idea what this is supposed to be.

The skin has an uninteresting palette and not much of a shape change, but the weapon skin is nice, and the glowing gauntlet is cool, even if it does not seem to have any justification beyond “it would look cool”. Your mileage may vary depending on whether you think McCree is great or pretty dull in general.

Wait, I take it back! Both this and Dracula Reaper are actually super interesting because the combination suggests the two characters deliberately paired their costumes. So is this ship canon now or what? 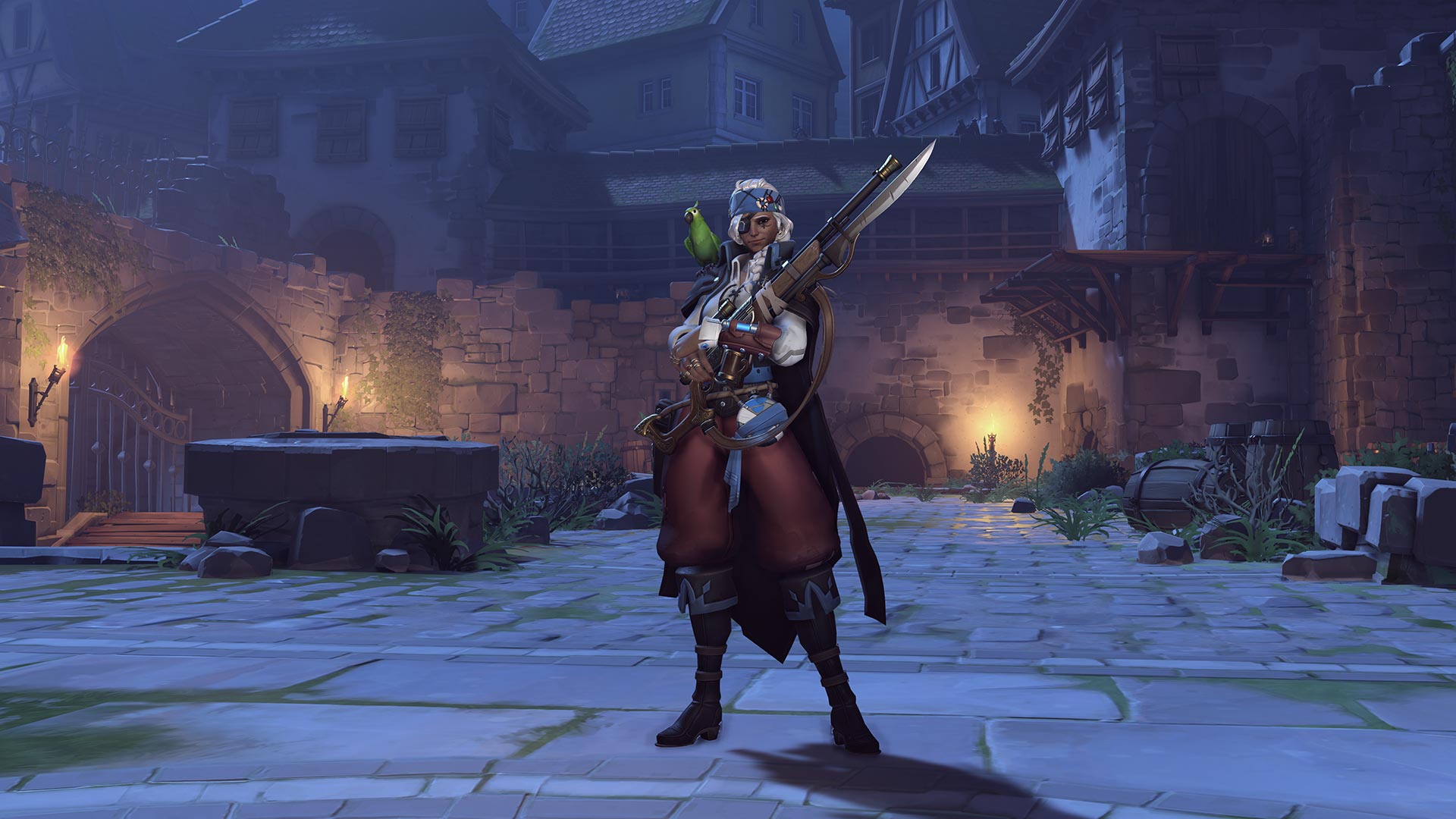 I love Ana and everyone loves pirates, so this is a pretty good option. Like McCree, Ana has played to her strengths, as she already has a whole drawer full of eyepatches and didn’t even need to mess about with string and black markers like the rest of us do.

The parrot is a nice touch, and the weapon skin is fantastic. Also, the outfit has a very nice flow, letting Ana’s hair hang loose and echoing it in details like the tails of her jacket.

Also, just to reiterate, it’s a pirate outfit. That gets an automatic thumbs up. 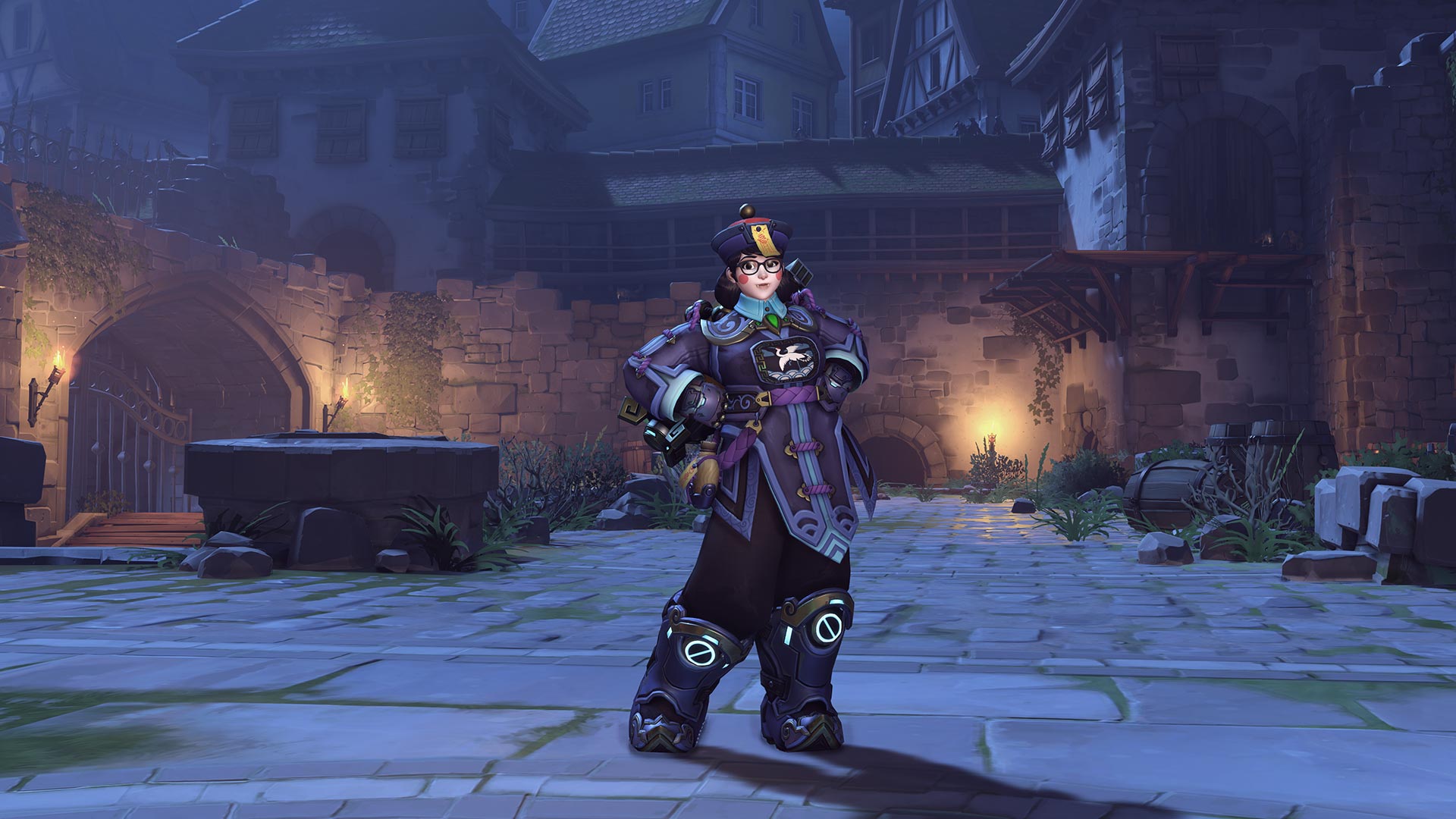 Everything Mei wears is super adorable and instantly gets a good rating, but this one comes in so high on the list because of her earnest attempt to dress up as something scary. See those little fangs poking out? Oh my gosh Mei, you really do your best, don’t you!

This skin also has an important educational component for those of us who didn’t grow up with Chinese legends and folklore, because it gets us to google “jiangshi” and learn all about these energy vampires, which have to hop around everywhere because they’re all stiff on account of being dead.

There is a whole genre of movies about these terrific creatures and our homework is to go watch them all.

The cult in this case is not one of those modern ones where a bloke sets himself up with 18 wives and locks them in a compound with a stockpile of automatic weapons, but the good old fashioned Lovecraftian kind. Zenyatta here has been busily bringing about the End Times by participating in millennia-old rituals to bring about the return of Cthulhu, or one of the other even harder to spell ones, and like many of his congregation has taken on some physical aspects of the Elder kind due to exposure to their horrifying radiation.

Zenyatta is already The Best One and the fact that he has sprouted tentacles from his robo-face only cements this state of affairs. Look at this skin in motion. Forget cosmic harmony! We are all about horror from beyond the cosmos now. I love it.

This skin has the advantage of being both totally awesome and absolutely believable as a reasonable effort real world Halloween costume. Since Overwatch is set in the future, Zarya’s 80’s throwback is even more rad than it would be today.

“Let’s get physical” is such a perfect theme for Overwatch’s resident gym junkie. The little details really make this one. Look at the print on her tights. Amazing.

Symmetra is Overwatch’s paragon of grace and elegance and absolutely deserves this incredible skin. Blizzard says it’s supposed to be a dragon, but I think we all know a tiefling when we see one.

This skin is on a whole other level to the rest of this year’s Halloween additions; it looks like the actual thing it represents, not a costume. I don’t know which I like better: the idea Symmetra and turn into a fire demon, or that she has the skills to create a costume like this for every Halloween if she fancies it. Which, of course, she absolutely does; she’s a genius with access to incredible manufacturing technology and resources.