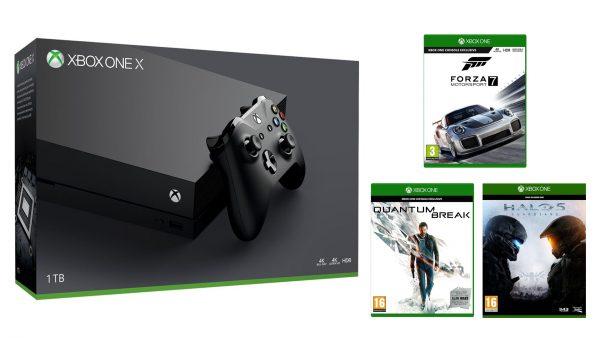 Currently, the best pre-order deal around for the Xbox One X is over at Currys PC World, where you can grab an Xbox One X console in all its glory (though, sadly not the fancy Project Scorpio edition) along with copies of Forza Motorsport 7, Halo 5 Guardians and Quantum Break thrown in at no extra cost. That whole bundle will cost you the same as the console on its own – £449.99.

Ordering through the site will also get you free launch-day delivery, too, which is a nice added bonus.

With less than a month to go before the Xbox One X finally gets unleashed on the world, it’s nice to see some nice deals emerging for the ‘world’s most powerful console’, as Microsoft puts it. Forza 7 has been repeatedly referred to as an ideal example of the type of graphical powerhouse the Xbox One X will be able to produce given its brute strength.

So how about it? Is this bundle enough to convince you to pick up one of these boxes at launch or will you be waiting for something else?