Io Interactive has asked Hitman players to mark their calendars for October 24.

Io said back in August players could expect “some exciting announcements,” so expect something interesting to be announced on October 24 at 8am ET, 1pm UK and 2pm CEST.

The studio emphasized the announcement has nothing to do with Season 2, so keep that in mind before getting too excited.

Until then, Hitman players have a quiet a bit to look forward to this month.

On October 13, ten new featured Contracts and the Master Scarecrow Challenge Pack will be available.

Master Scarecrow Challenge Pack will feature five new challenges, each with a “high amount of location mastery.” Completing all of the challenges will unlock a new item for players to use in all locations. More information on this will be provided next week. 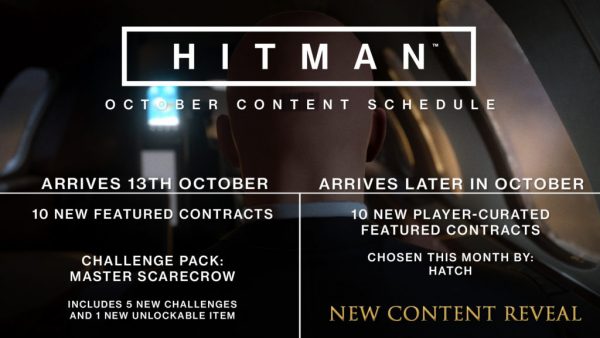 Later this month, the next batch of player-curated Featured Contracts will be available, and the list will be chosen by a Hitman player.

Io Interactive announced in June it was once again an independent studio and had retained the rights to the Hitman franchise.

Hopefully, the studio won’t make us wait too much longer for news on Season Two.