The Destiny 2 Faction Rally event ends with the reset today, so it’s best to make sure you’re not missing out on these top weapons.

If you’re not familiar, Factions in Destiny 2 arrived at the Tower as part of the Faction Rally event. The Faction Rally lets you pledge allegiance to one of the three Factions, and earn tokens every time you take part in the game’s various activities.

The more tokens you turn in, the more levels you climb with your favourite Faction. It works the same way planet-specific reputation tokens/vendors do, but there’s a way to to earn tokens even quicker. Every new level you reach awards you with a new Legendary Engram.

Each of these Engrams drops Faction-specific weapons and armour, but there’s a maximum to the number of Engrams that will award you faction gear. This is not a problem for most players, but it’s something you should be aware of.

Of all the weapons given by the three different Factions, there are five in particular you should endeavour to have. Though, yes, you can’t control what the RNG sends your way, you certainly can be on the lookout for the good stuff, and not be so eager to dismantle it.

Check our Destiny 2 guide for more lists, tips, tricks, and other useful info. Of note is this amazing list of the top 5 Legendary weapons in Destiny 2 that you should also keep note of. 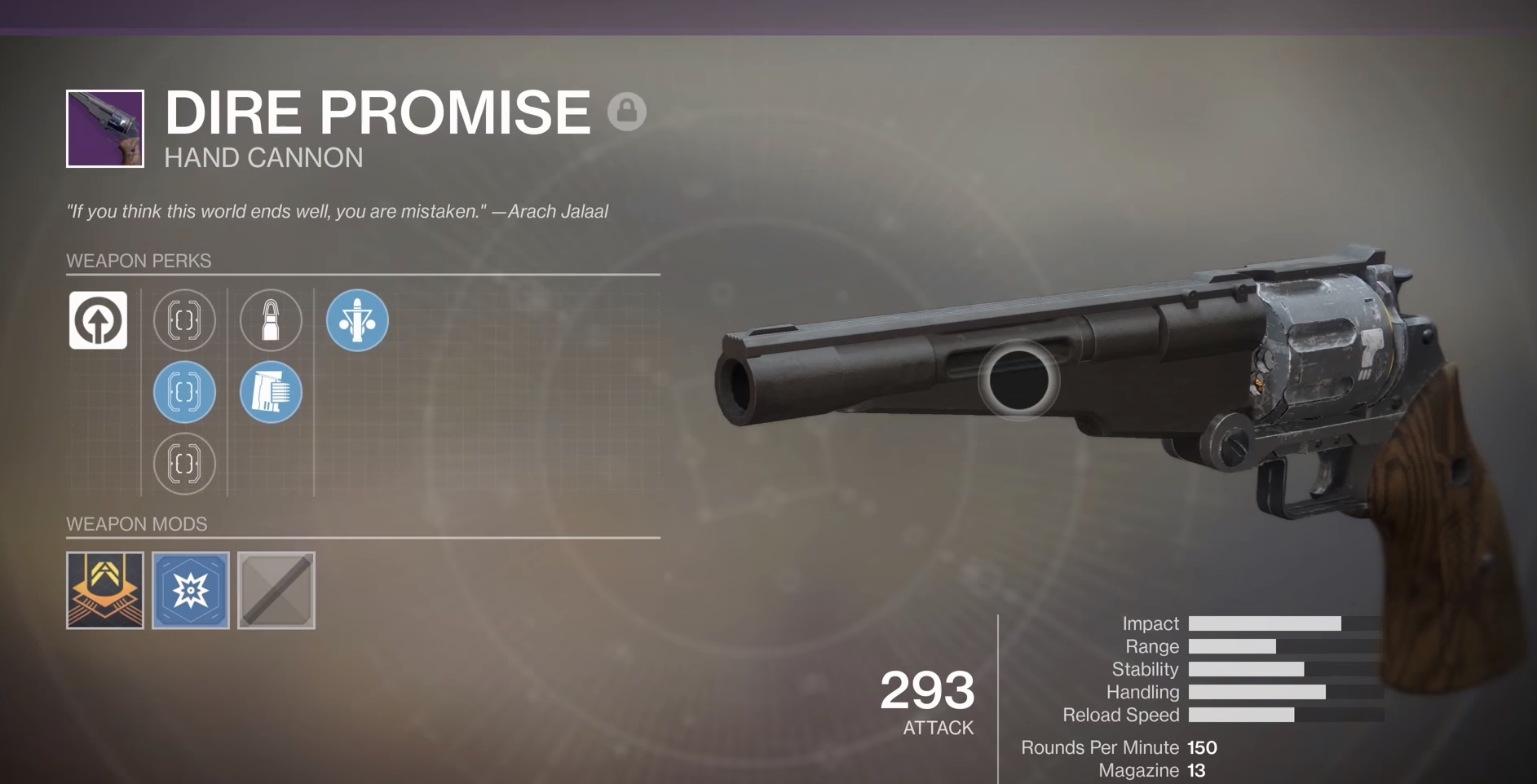 Dire Promise looks similar to Old Fashioned, the hand cannon you can find in EDZ reward packages. Dire Promise has 11 rounds (upgradeable to 13) by default, and an RMP of 150.

Impact and handling stats are very high, making for effective, stable shots. Lightweight Frame is the intrinsic perk, granding a speed bonus when the weapon is equipped.

Dire Promise comes with three perk columns, two of which offer you different choices. The first includes a number of different sights:

The second column is all about magazine size:

Finally, the third column has the famous Triple Tap trait that returns one round to the magazine whenever you land precision hits in quick succession, which shouldn’t be a problem with this one. 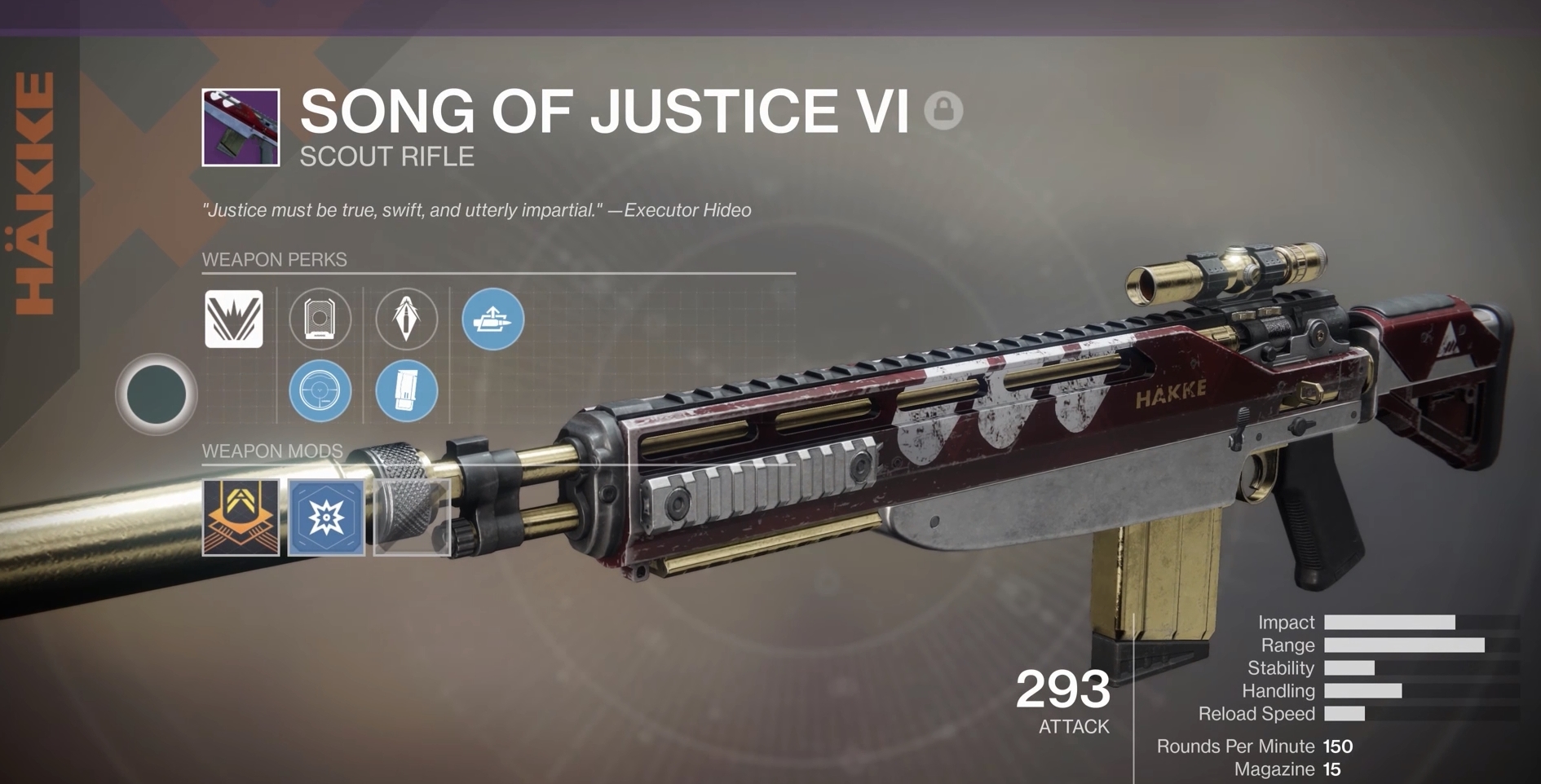 Song of Justice is a scout rifle with a 150 RPM, and 12 rounds (upgradeable to 15) in the magazine by default. The intrinsic perk for Song of Justice is High-Impact Frame, which grants bonus accuracy when fired from a stationery position, and by aiming down its sights. Naturally, the weapon is great for boss encounters and other situations that require you to be stationery for a while.

Same deal here with three perk columns, two of which are customisable. The first one has two different sights:

The second column lets you pick from two magazine options:

Song of Justice has one final trait: Auto-Loading Holster, which automatically reloads the weapon, when holstered, after a short period of time. 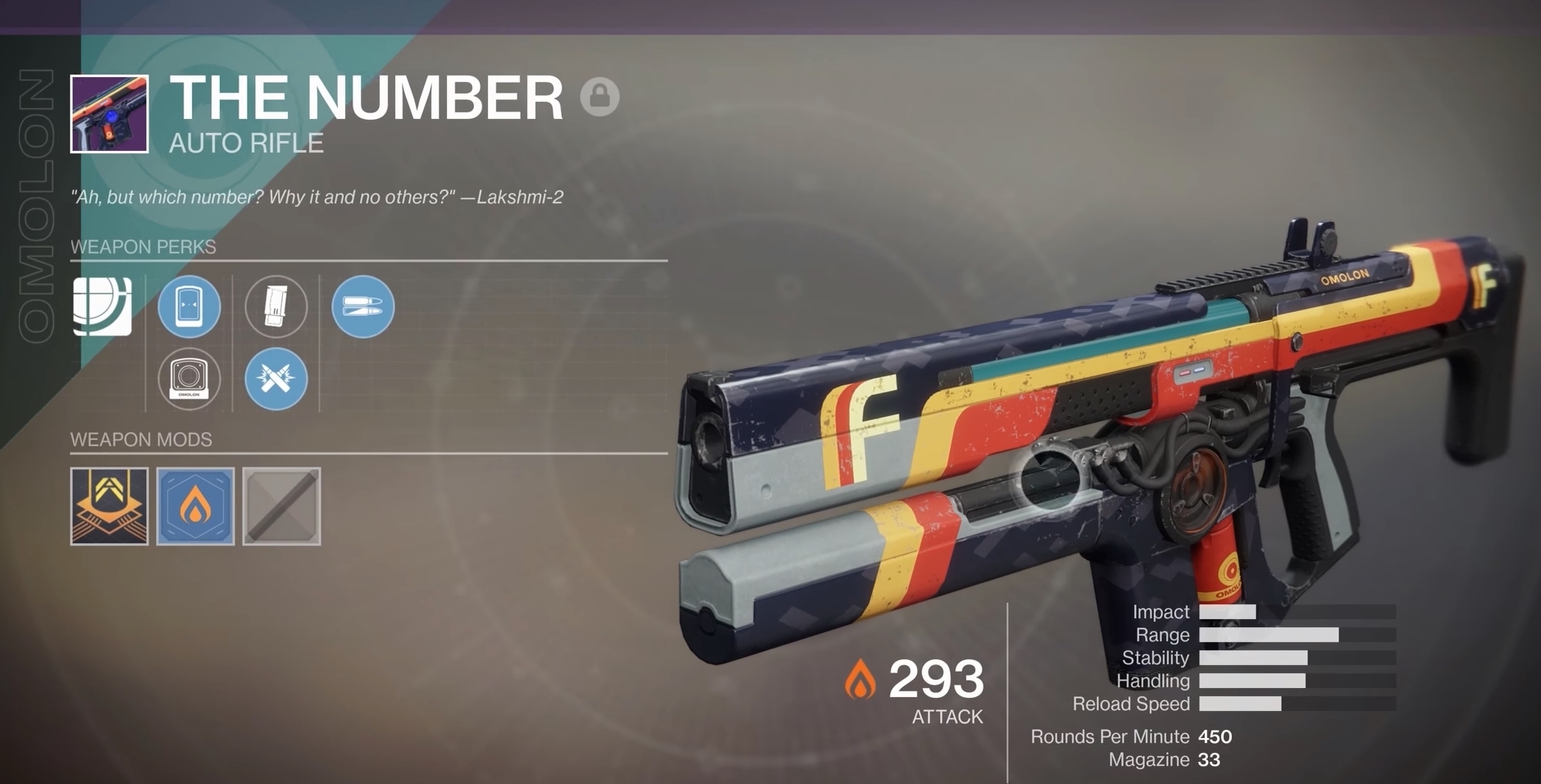 The Number is an Energy auto rifle that resembles Uriel’s Gift, at least in aesthetics. The Number has a decent RMP at 450, and comes with a 33 rounds magazine by default.

The intrinsic perk here is Precision Frame, which means that weapon recoil is always going to kick upwards. Your two perk columns are for sights, and magazines. The first one has:

The magazine column gives you the choice between:

The second magazine option is what you should aim for, despite the decreased bullet counts. Even though ricochet rounds is a situational benefit, this magazine increases stats across the board.

This, coupled with the High-Impact Reserves trait – which enables the weapon weapon to deal more damage at the end of the magazine – means you have an accurate, easily-controlled auto rifle. 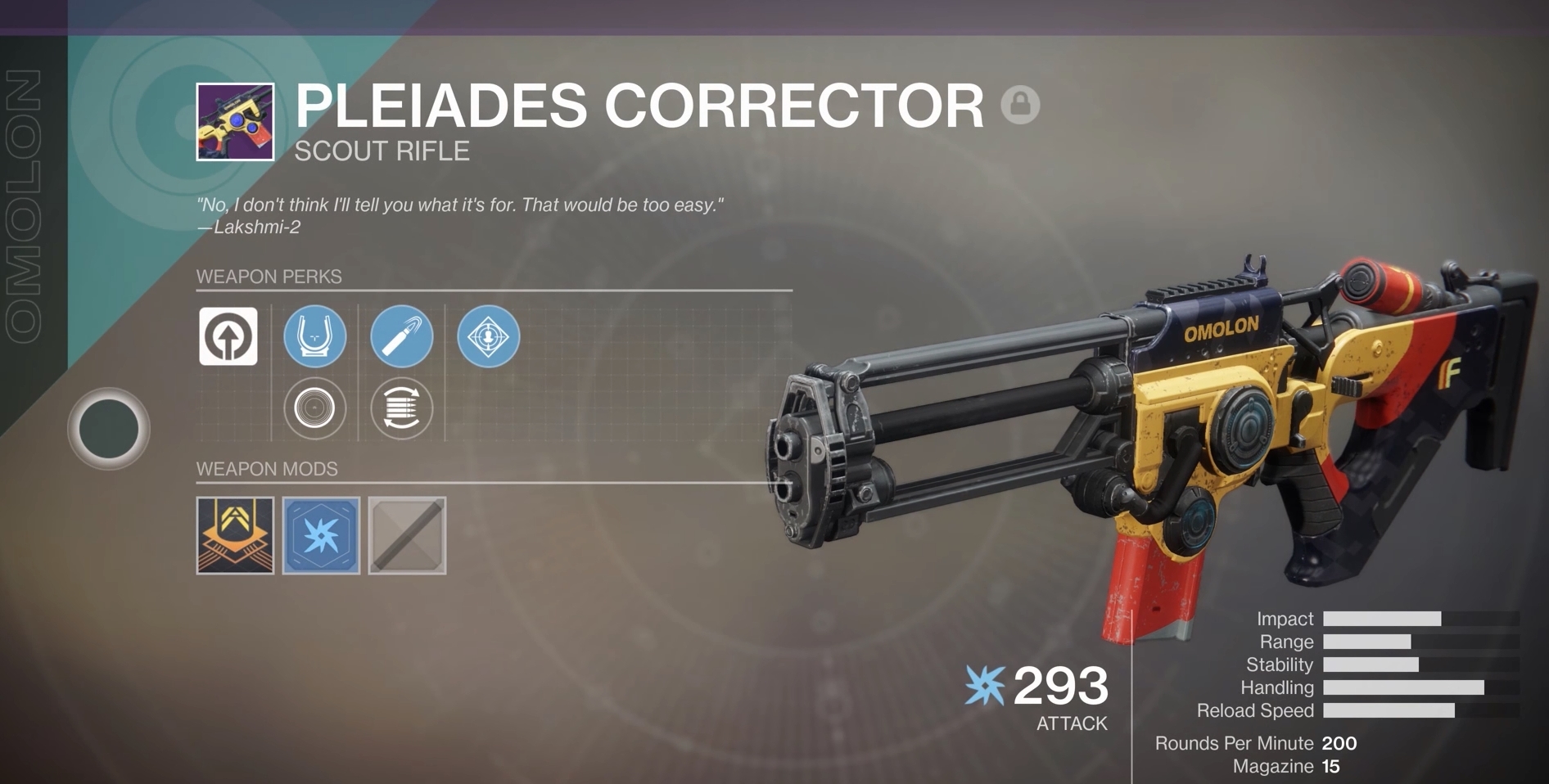 As with most Faction weapons, this one is based on an existing design. This time it’s the Manannan SR4. Pleiade’s Corrector has an RPM of 200, and 15 rounds in the magazine by default.

Though it has good impact and a good reload speed for a scout rifle, it’s the handling stat that’s the highlight here. Once again, Lightweight Frame is the intrinsic perk, granting a bonus to movement speed when equipped.

For the magazine, you also get two choices:

The Rampage trait is what sets Pleiade’s Corrector apart, especially in the damage department. The trait allows the weapon to gain a temporary damage buff every time you get a kill with it, stacking up to 3x. 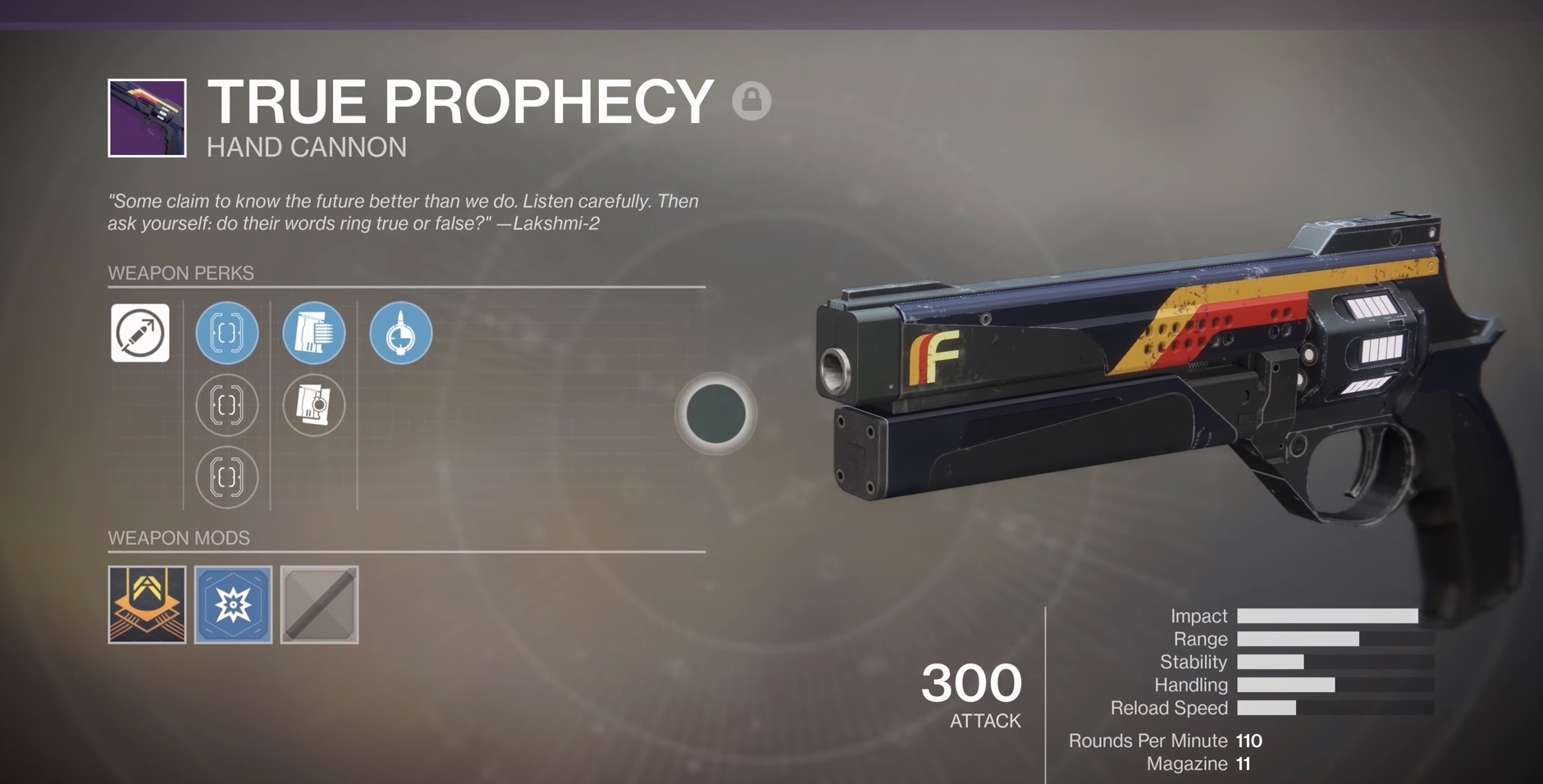 This is probably the best one on this list, and another one to add to Future War Cult’s already good offering. True Prophecy has 9 rounds (upgradeable to 11), and an RPM of 110. It comes with the Aggressive Frame intrinsic perk for increased damage, and increased recoil.

The impact stat is pretty high here, with decent range and handling. Like Dire Promise above, you have three sight options:

For the magazine, your get two options:

Timed Payload is what rounds up this already great package. This trait allows bullets that hit to do extra explosive damage shortly after connecting, on top of the weapon’s already excellent damage.