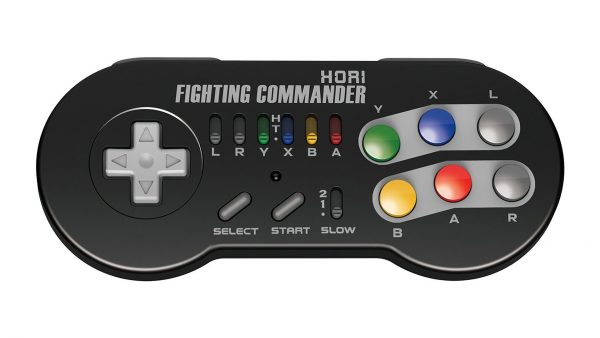 In one of the best examples of companies getting together for the greater good, you can get yourself a Hori Fighting Commander this week – a controller officially licensed by Nintendo to work with the Super Nintendo Classic Edition. There have been versions of Hori’s Fighting Commander controllers on a wide variety of consoles over the years, though in recent times the series seemed to have all but disappeared. Until now, of course.

The Fighting Commander is a six-button controller, making it ideal for games like Super Street Fighter II (which, conveniently enough, is one of the games featured on the Super Nintendo Classic Edition), as well as many others. The pad is also designed after the classic SNES pad, emulating its shape in a nice matte black finish.

There is even a full set of rapid-fire switches here, allowing users to set individual buttons to turbo mode on the fly. There’s a trip down memory lane if ever I’ve seen one.

All in all, Hori’s officially licensed Fighting Commander controller for Super Nintendo Classic is a bit of a wonderful thing for any fight fans or just those of us with a huge weak spot for nostalgia.

The Fighting Commander is due for release this Friday, 29th September, and will cost you $24.99 plus tax.