EGX 2017 takes place next weekend. Those who attend will have three of Ubisoft’s upcoming releases to try out.

Ubisoft is bringing four of its biggest releases to EGX 2017, one of which visitors to the booth will be able to play on Xbox One X.

The console will land at retail this fall, and if you live in the UK, EGX is the only available opportunity to demo Xbox One X before it launches November 7.

At the Ubisoft booth, Assassin’s Creed: Origins will be playable on both PC or Xbox One X. Being playable on Microsoft’s console is only fitting as the game was first revealed during the Xbox E3 2017 briefing running in 4K on Xbox One X.

Assassin’s Creed: Origins takes place in ancient Egypt, and while Ubisoft didn’t provide details on which section of the game will be playable, but it’s likely to be the same playable demo from gamescom 2017. We could be wrong. At any rate, plan on traipsing around the desert, slapping bad guys around, and gazing in awe upon the pyramids. Assassin’s Creed: Origins releases on October 27 for PC, PS4 and Xbox One. 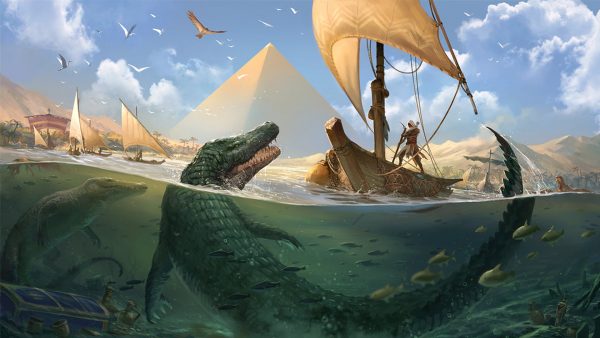 Far Cry 5 releases in February for PC, PS4 and Xbox One, and since its the first numbered entry in the series since 2014’s Far Cry 4, it should be an interesting game to get some early hand-ons impressions of before release. In Far Cry 5, players are tasked with leading a resistance against a fanatical cult in a small, Montana town. But, there’s more to do than off crazy cult members. You’ll be able to chat up the locals and explore the area with Boomer, your trusty Australian Cattle Dog.

Hope County also has plenty of rivers to fish, land to traverse, and lovely vistas. After all, Montana isn’t called Big Sky Country for nothing (trust me).

The next Ubisoft title to be released in 2017 is the long-awaited South Park: The Fractured but Whole. Out in October, the follow up to 2014’s The Stick of Truth picks up the next day with Cartman hell-bent on creating a franchise for his Coon & Friends superhero group. Players will create their own hero and backstory, fight crime using the all-new combat system, crafting system and of course, earn loot.

Created, written, voiced, and directed by Trey Parker and Matt Stone, the game feature more than twice as much content as the previous game.

Already available for Nintendo Switch, attendees who are on the fence regarding the console can demo Mario + Rabbids Kingdom Battle in both single and co-op modes. The tactical turn-based title was released on August 29 and reviews scores for Kingdom Battle are rounded up in this handy post.

Finally, in partnership with ESL, Ubisoft will hold the Rainbow Six UK Invitational for Rainbow Six Siege as part of the ESL Arena on Friday, September 22.

The Rainbow Six UK Invitational will feature both the semi-finals and final stage of the competition, during which four teams from the Go4 UK Xbox One finals will go head-to-head for the chance to take home a £4,250 prize pool.

As always, VG247 will be on-hand at EGX as it celebrates its 10th year at Birmingham NEC.