Pokemon Go players can now try to catch three Legendary Pokemon of the feline variety. Or canine. Depending upon which camp you’re in. Just call them beasts and be done with it, please.

Trainers worldwide will be able to catch these creatures from the Johto region, and each will be “traveling the world throughout the coming months.”

According to Pokemon lore, Raikou, Entei and Suicune were resurrected by Legendary Pokemon Ho-Oh after the Brass Tower was burned. Each of the three Pokemon represent an element pertaining to the burning of the tower.

Raikou, an Electric Type which is tiger-like, is said to represent the lightning strike which started the fire. Entei, a Fire Type with lion and mastiff features, represents the fire itself. Suicune is a feline looking Water Type which is said to characterize the rains which put out the flames that destroyed the Brass Tower. 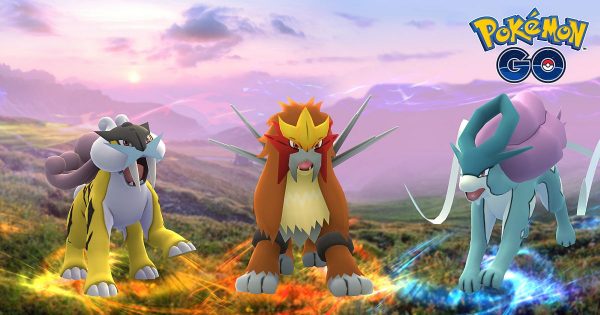 From now until September 30, Pokemon Go players can find these beasts in the following regions:

On September 30, all three will move to a different location and will remain available in-game until October 31 where they will make their final stop.

During their travels, Niantic Labs will begin a EX Raid Battle field-testing phase at select Gyms. Formerly known as Exclusive Raid Battles, the new system will be tested before being made available globally using feedback collected from early tests.

While the field test is live, periodic adjustments will be made to EX Raid eligibility requirements, frequency, times, locations, and duration.

The first EX Raid Passes will be sent out soon, and those invited will be able to try the new feature starting September 6.

Pokemon Go was recently updated and along with various bug fixes, players are now able to view the number of Trainers who have entered and are preparing for a Raid Battle before using a Raid Pass.