To prepare for the console launch of Destiny 2, the Destiny Companion has been updated with new features which will overwrite the current version which supports Destiny 1.

Bungie outlined the changes and features coming to the Destiny Companion a couple of weeks ago. Today, it provided additional information on what to expect from the app when it launches alongside Destiny 2 on September 6.

According to the studio, it wanted to make the app more accessible players and provide a more cohesive and simplified experience.

Many of the same features which launched with the app are still there, just more streamlined to support Destiny 2.

This includes the ability to manage and inspect armor, inventory and weapons. Users will still be able view stats, perks, and inventory configuration along with the option to manage and equip items on characters.

Users will still be able to create and recruit for Fireteams and other activities, along with manage experience with account information, identity and settings. Other features returning include Bungie code redemption, issue reporting, and more. 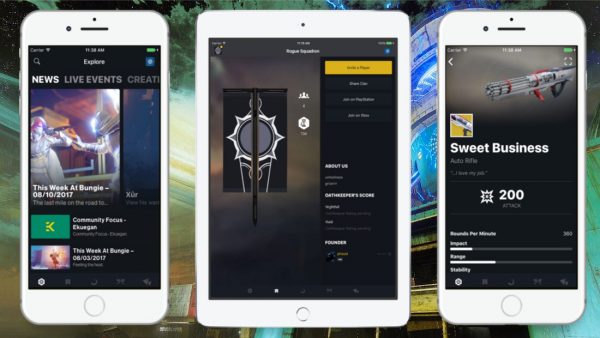 The new features coming to the Destiny Companion have been broken down below:

Explore: The first place users will land when the app or website is loaded. This contains news articles, patch notes, and community highlights as well as a view on what events and activities are live in the game. This will include a look at some of the gear and weapons, along with the ability to browse community creations. It’s basically a point for access to community forums and groups.

Clans: If not already in a Clan, Destiny Companion users will be able to search for one or create a new one and invite others to join. Here, the user will be able to access clan progress, chat with Clanmates across different clan-created channels, and create or customize the clan banner.

Progress: This will show where the player has been so far and what they should do next. At launch, this will consist of milestone information, but this feature is expected to evolve over the course of Destiny 2.

Gear: Will show how characters are currently setup and how the gear build can be streamlined by moving or equipping both gear and weapons.

Destiny 1’s API will remain active, so if a player is looking for management or stat tracking, the community will continue to cover such things with the apps they’ve created.

Again, when Destiny 2 launches, the updated Destiny Companion will overwrite the Destiny 1 version, so just be prepared.

Destiny 2 releases on PS4 and Xbox One next week and on October 24 for PC.