Capcom’s great Monster Hunter gamble seems to be paying off.

Back at E3 I saw a hands-off demo of Monster Hunter World and absolutely fell in love with it. The demo featured some try-hard commentary from an overly-eager hype man but that honestly couldn’t lessen its impact: it looked amazing.

At the end of E3, I sort of broke one of my personal rules – I took one of our VG247 E3 Editor’s Choice awards and pinned it onto Monster Hunter, a game that wasn’t actually playable at the show. That’s always a bit risky, but that’s how impressed I was. Today, I played it on PS4 Pro. I don’t regret my decision.

There’ll be video footage from my play session to come some time later this week or early next when I have time to edit it all together (Gamescom is a busy, boozy affair) but I figured it’d be important to get some timely impressions out today, too. So here they are! Here’s the headline: I bloody love it. 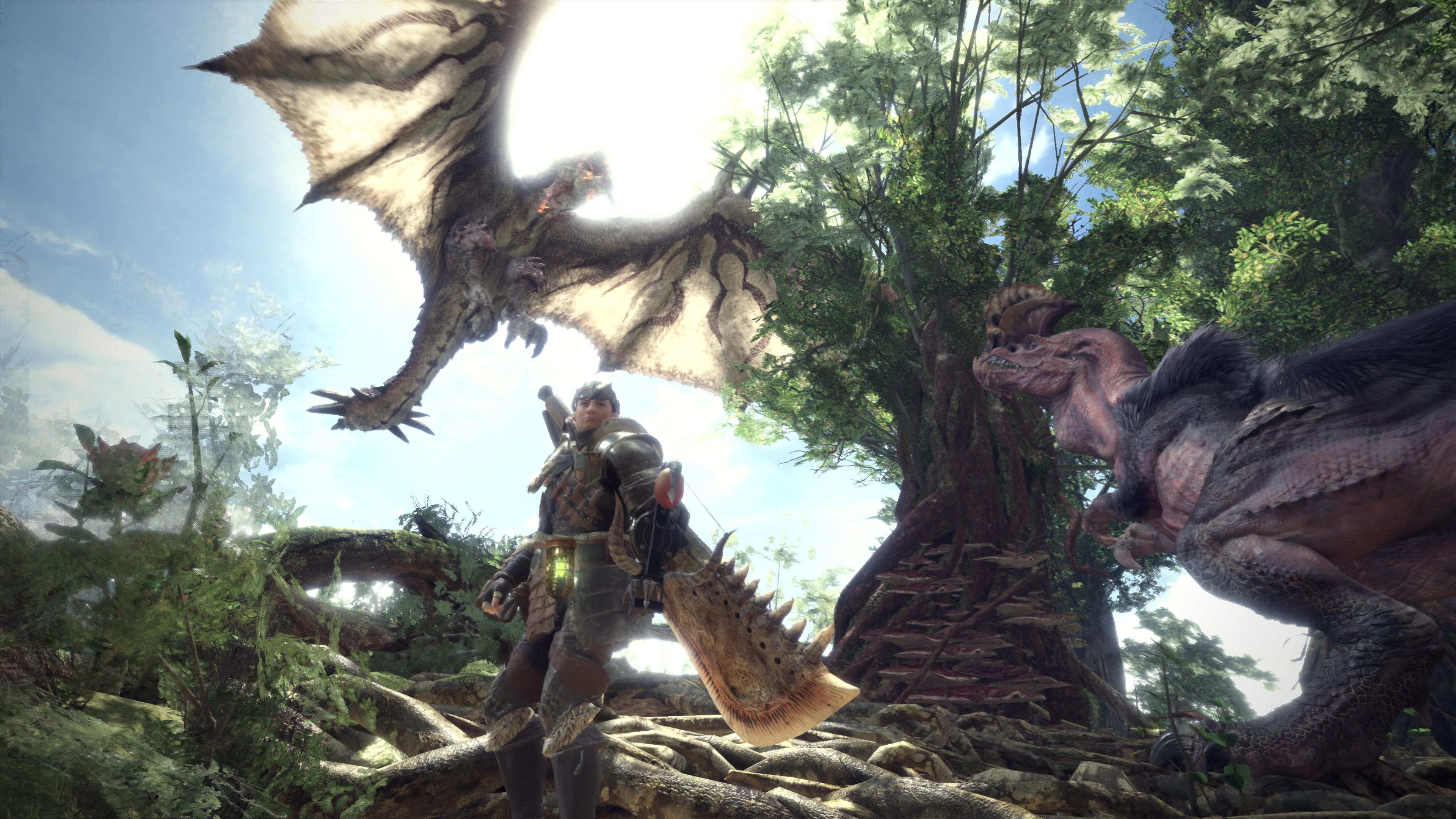 The demo let me tackle the same area as E3 but with the option of two different hunts: an easier one, and the more difficult hunt that made up the mission I watched the developers struggle to beat at E3. In the end I had time to play both – and I left the demo still wanting.

I’ve been a casual Monster Hunter player for a while now – I’d dabble in each new entry in the series a little on release and then fall away, slightly discouraged from going too deep by some of the series’ more archaic eccentricities. This is where World seems to triumph most: it jettisons a lot of these small foibles but absolutely, positively still feels like Monster Hunter.

The best thing about all of this is also that it all feels natural. Nothing of Monster Hunter World’s streamlined, slicker execution feels out of place. The fact that you don’t need to root yourself on the spot to heal feels natural, and so too do the changes to systems like looting, gear and weapon selection. All the decisions flow together in a smart manner that serves to make the game a great deal easier to approach and have fun with.

Bubbling beneath that surface, however, is the raw heart of old-school Monster Hunter. It’s about hitting enemy weaknesses to topple them, mounting enemies, or picking the right weapons or traps for the right situations.

In my first mission, the easier of the two, I was tracking down a Great Jagras. I quickly realised the patterns I needed to follow to take this beast down, and was happily alternating between rapid-fire attacks to chip away at its health and heavy, charged hits to knock it off its feet. When it tried to run, I used ranged weapons to slow it down and then caught up and began beating it anew, refusing to let it escape to its nest.

This is one way you can tackle this fight, but it’s one way of many, too. In the next fight against an Anjanath, an enormous dinosaur-like creature, I decided to try to use the Great Jagras on the map to my advantage. I aggroed it and drew it towards where the Anjanath was located – and when the two met, they began to fight between themselves, a lovely visual spectacle that I watched for a while before getting stuck in to the both of them. 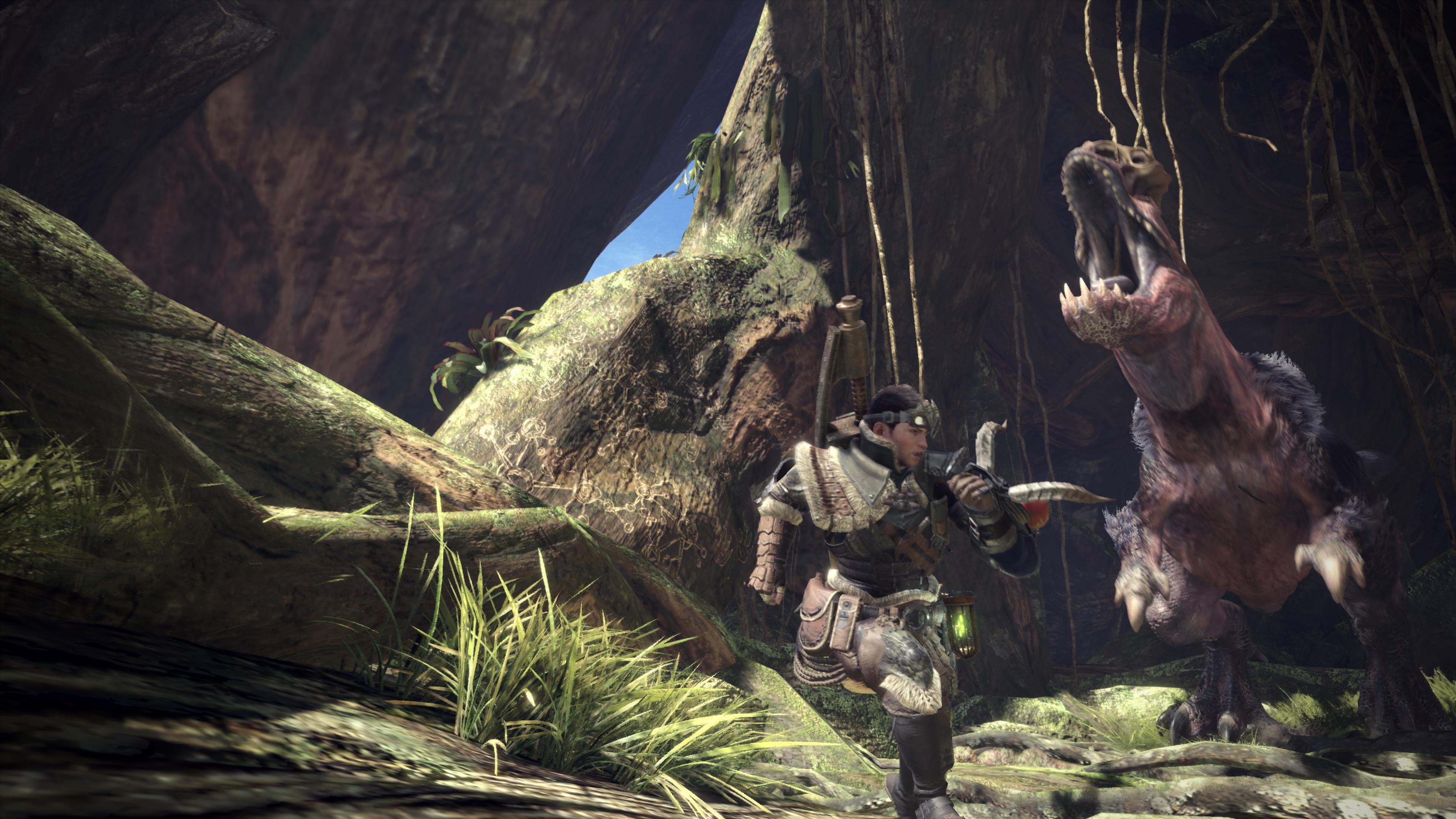 As you’d expect from Monster Hunter there’s a great deal of variety to the world, and the new open nature of things encourages you to experiment and explore. There’s gear to help this, too. One piece of gear lets you glide in a Zelda: Breath of the Wild style, for instance, and though exactly how this can be used wasn’t clear in this short demo the possibilities are properly exciting.

Anyway, yes: Monster Hunter World is looking fantastic, and despite it being the first thing I saw this week there’s a strong chance it could end up as my Gamescom game of show. Much of it is new, but it feels familiar in all the right ways, a solid mixture of Monster Hunter, mechanics and ideas from other RPGs and new ideas that makes for an exciting proposition indeed.

Monster Hunter World is out early next year, and I’m more pumped now than ever. Look out for some video of me cutting about with a gigantic sword soon.