Xur’s pick this week is one of the good weapons.

The elusive vendor brought Bad Juju with him, one of the most fondly remembered pulse rifles.

Bad Juju is remembered for being many Destiny Year 1 players’ first Exotic weapon, and for good reason, the weapon was among the best pulse rifles available in the game. Things have changed since then, but Bad Juju remains a good pick.

For PvE, the String of Curses perk is amazing at dealing with trash mobs, as it reloads the gun instantly after each kill, and increases damage. You can essentially keep pulling the trigger and never lose accuracy.

Using the weapon greatly increases your super recharge rate, also great for any situation. It’s not a top pick for PvP, but that’s generally because the meta doesn’t favour pulse rifles that much. 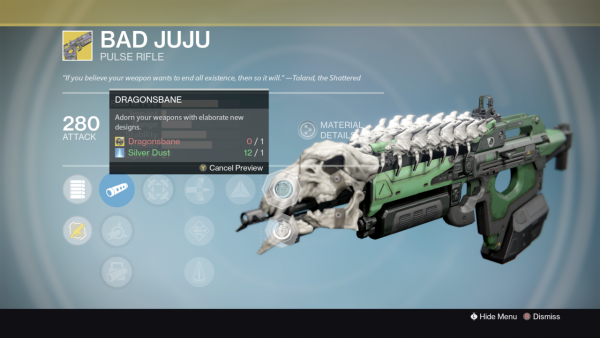 Bad Juju also has a couple of really good looking Ornaments, which change up its looks completely. Xur isn’t selling those this week, though.

In short, go get it just in case you don’t already have it. It has a skull on the front of it, after all.