Earlier this year, Project Cars 2 developer Slightly Mad revealed that the game would release around September. The studio later pinned down a day, but the only thing I could think of at the time was how close it was to Forza’s typical release date.

Surely, I thought, Project Cars 2 could benefit from an earlier or later release. After all, it’s the underdog in this fight. Having now played an in-development build of Project Cars 2, I am not sure the two games are going for the same audience.

I enjoyed the original Project Cars. It had flaws, lacked content compared to Forza, and was generally aimed squarely at the type of people that know what a race setup is and are willing to spend the time to create one for each race. But at its core, the driving, handling and sense of speed were all as good as what the big boys offered.

Project Cars 2 builds on this legacy, but instead of trying to make things more inviting to casual or new players, it offers a path for those willing to put in the effort to become part of the first group.

This philosophy affects everything from the authentic career progression, the carefully chosen roster of cars, to the difficulty curve in car handling and AI racers. The career mode offers a selection of 19 championships to start, spread across several different disciplines. Your progress in this mode will take you through six different discipline tiers, with some locked from the start.

Each championship will put you on a linear path that’ll open up other championships and disciplines with faster cars, and more gruelling conditions, hopefully leaving you with a better understanding of real-world racing scenarios in the process. This is not a game where you’re going to pick a car you like and have everything else change to accommodate that choice. 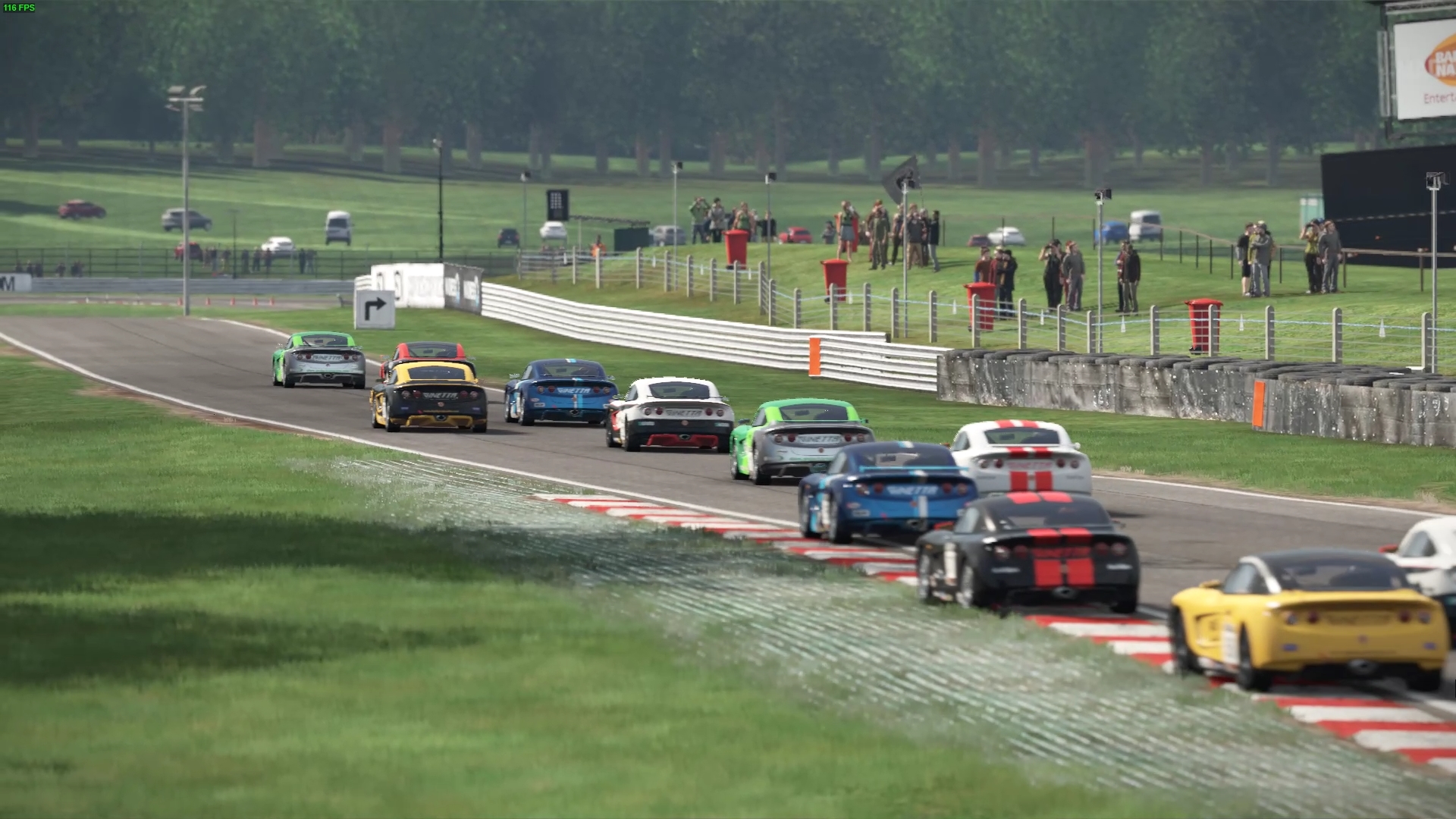 “This model is perfect in execution. It’s as close to the real thing as you can get, but it also means – much like a real race – you can’t relax until it’s over.”

In Project Cars 2’s career mode, you’re going to have to start from the bottom and work your way up to better, and therefore more challenging championships. Any discipline you pick is modelled after its real-world counterpart, so you’re limited to the selection of cars real racers use.

In any of the championships, your only choices come down to the car model (very limited early on), and how long or short you want the season to be. You’ll still be expected to go through the full race weekend from practice, to qualifying and eventually the race. Qualifying is a necessity here, not merely a gesture to pander to the sim-obsessed. If you don’t do a good time in qualifying, your grid placement on race day will suffer. If that happens, you’d already be starting with a nice handicap.

In more demanding disciplines, tyre wear and your fuel weight are major considerations, thus making pit stops crucial. If you’re brave enough to allow car damage be more than just pretty visuals, you may need to go in and replace a front wing.

Similarly, tyre temperature is a something you’ll need to understand as it pertains to the type of car you’re driving. The game mentions this the first time you start it, but nothing will drill it into your head like seeing your car handle poorly fresh out of the pit and gain more grip later when tyres heat up.

To finish a race, a certain number of laps or set amount of time must be cleared before you can move on. In disciplines that track time rather than position, you can skip to the end of the race if you’re really confident no one will beat it, but that’s a risk that’ll mean starting the race over if things don’t go your way. The same goes for qualifying, which you can skip to the end of but not ignore entirely. 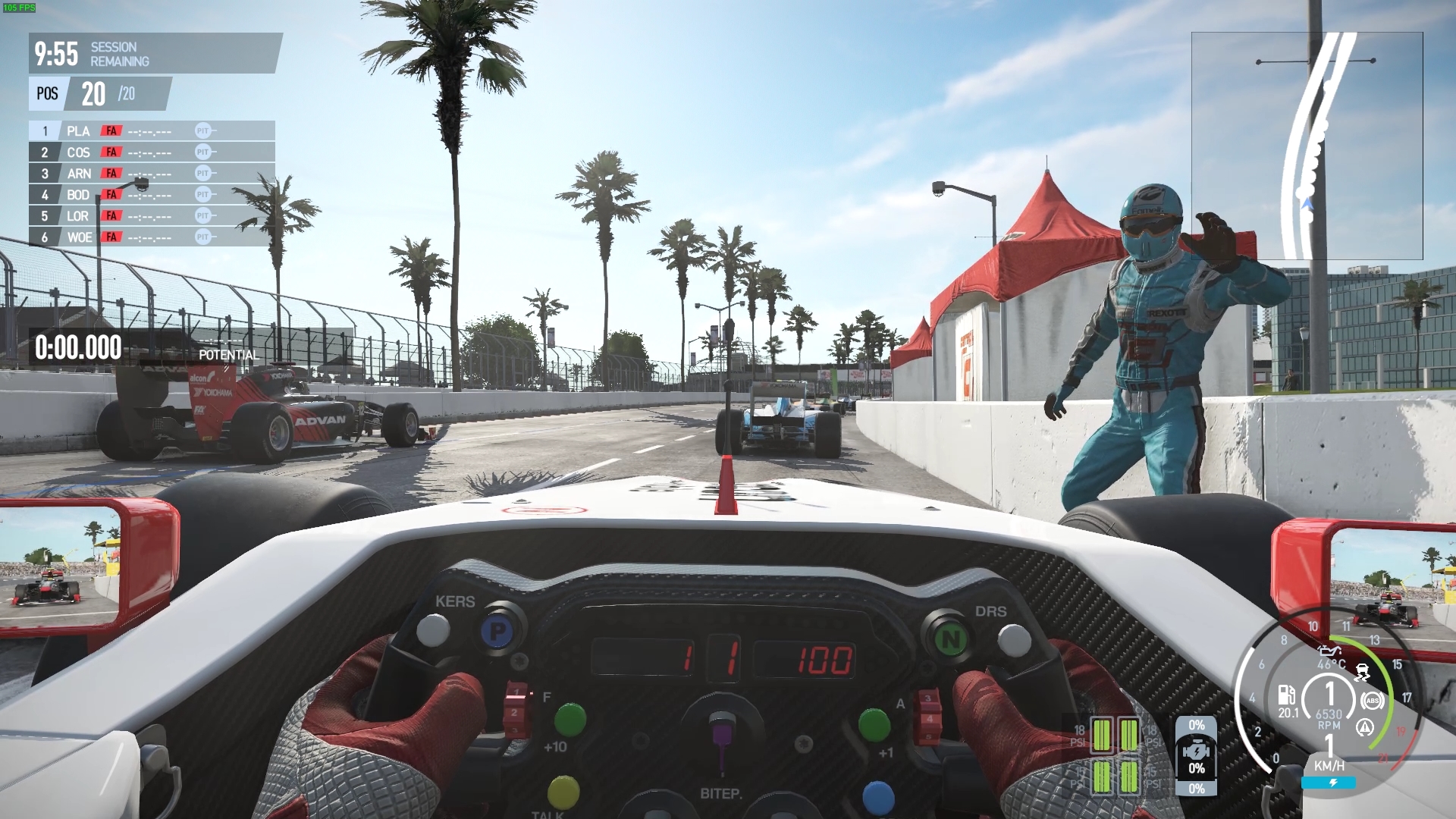 Much to the dismay of the casual player in me, restarting a race is your only chance for a do over. There’s no rewind mechanic. If you mess up a corner, it’s on you. Going down the Bathurst hill in an Indycar will demand your absolute best if you don’t want to mess up those tight corners at 100Km/h. In tracks with wide runoff areas, you’ve likely already lost if you slip and don’t regain control quickly enough.

These rigorous demands are somewhat balanced against a realistic approach to finishes and point distribution, meaning you don’t have to always be first at everything to win, because very few can do that in real life. This is where Project Cars 2 started losing me.

A setup like this means every race is akin to a Quake match. Every skill you have in a shooter must be utilised in order for you to do good in Quake. Movement, shooting, map and item spawn knowledge, the whole thing.

Project Cars 2 is the same way. If your cornering is bad on Turn X on this track, there’s no alternative to getting better at taking that corner. This is why practice sessions exist. Cultivating a sense of when to pass other cars, and what amount of exceeding track limits will be allowed is something you’ll learn through playing, because these are the sort of things that’ll incur heavy penalties.

This model is perfect in execution. It’s as close to the real thing as you can get, but it also means – much like a real race – you can’t relax until it’s over. It’s draining to have to run around the same track for 15 minutes, knowing that a single mistake can destroy you.

This push and pull is what got me playing less of the game than I would have liked. 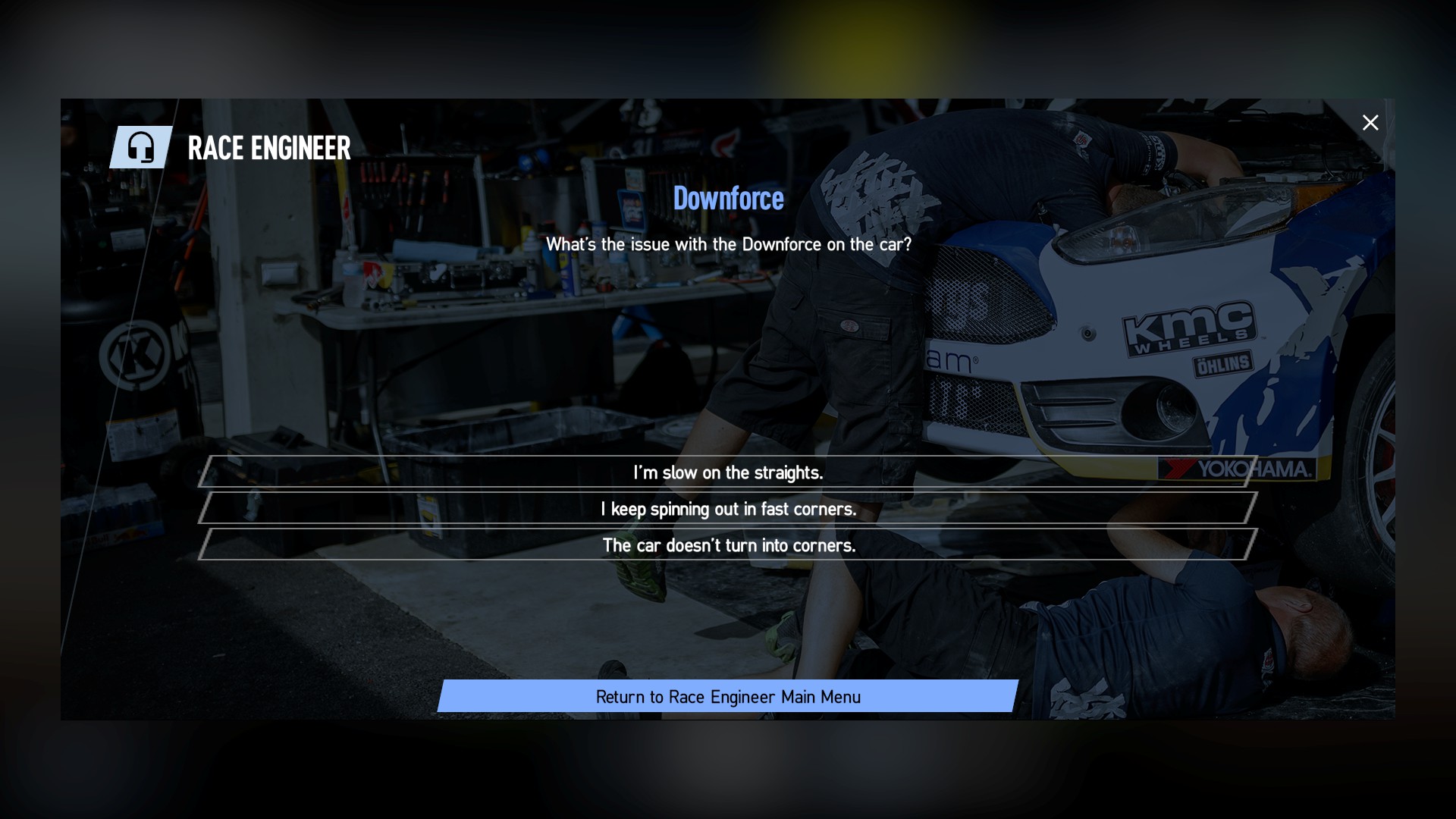 Project Cars 2’s presentation doesn’t make any concessions, but it will offer up some training wheels specifically designed, not necessarily to make things easier, but to put you on a path to getting better.

If you don’t want to bother with tuning setups and don’t have the faintest idea what anything on that menu even does, you can let the race engineer decide. In any other game, getting stuck on such a technical menu would have been the end of the story. In Project Cars 2, you get to have a conversation with your engineer about what you actually need changed.

There’s a dialogue tree under every one of the four tuning categories, an ingenious way to handle something as complex as turning.

Things like “I’m stopping too quickly“ or “I’m slow on straights” are simple enough for anyone to understand, but can each lead to tuning adjustments you need. The aim is to gradually get you interested enough so that you do the setup yourself. It can only be seen as a half-step compared to more lenient games, but it’s perfectly inline with Project Cars 2’s vision.

“Driving in first-person is essential, it’s how you’ll begin to see everything come together in a way no other racing game with AAA production values can offer. I have never felt more connected to a car than I have in Project Cars 2.”

Even when it’s lights out, you won’t find too many similarities between Project Cars 2 and a game like Forza. For instance, the latter will offer you a customisable, easy-to-read map, and different options for a racing line. Here, the map is always on the top right. That’s possibly the worst place for it, but it got me to focus on the race rather drive off it. So I guess it’s working.

In the same vein, turning the racing line on in Project Cars 2 means you only see it before corners. That’s it. None of the long, perfect racing lines so many other games have. It makes sense, but it’ll take you a while to get used to. 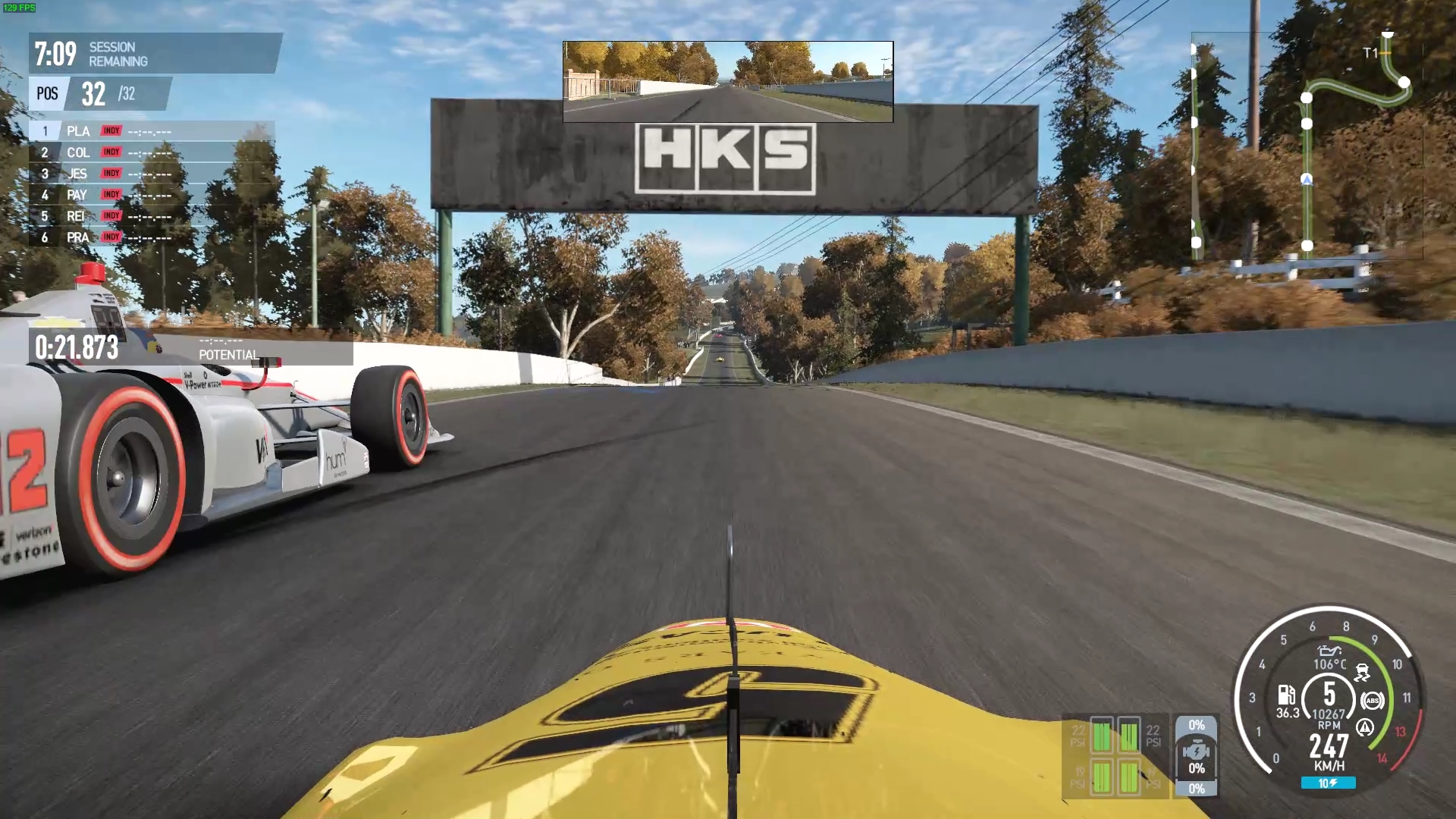 One race after another, you’ll begin to understand what the game is trying to do. Even something as trivial as the chase camera, almost always a perfect angle in other games, is an afterthought here. I could never get it to look and feel right, despite my many tries with the angle and FOV adjustments.

If you dare to lock things to the cockpit, though, you’ll be presented with several different views and a cockpit experience that’s better than anything else out there. It’s only then will you truly appreciate Project Cars 2.

Driving in first-person is essential, it’s how you’ll begin to see everything come together in a way no other racing game with AAA production values can offer. I have never felt more connected to a car than I have in Project Cars 2. Doing a couple of laps in any car is enough to demonstrate this.

After a while, I began to rely on the car sounds and movement in the back – which I could only feel, not see – to learn I am about to hit an uphill corner without even needing to look. All the information you need is there, you just need to pay attention.

I kept wondering throughout my time with the game if adding a rewind feature, or a map and racing lines that resemble what you’d get in Forza or Gird would ruin it for those who turn them off anyway. I doubt they would have, and I am positive it would make me and many others happy to experience everything the game has to offer without it being too punishing.

I immensely enjoy Project Cars 2’s core mechanics, and I feel there’s absolutely a place for a demanding counterpart to the polished Forzas and Grids of the world. So many games out there shoot for one-to-one realism, forgetting the fun in process. Project Cars 2 is not that, but I’d be lying if I said it would be my main driving game this year, the same way Quake isn’t my pick-up-any-time shooter.

Impressions are based on the PC version. Project Cars 2 is out September 22 on PC, PS4, and Xbox One.