VR is a fun gimmick, but it’s incredibly difficult to make it feel like more than that.

I love breaking out a VR headset when friends are over. It’s a laugh to throw them into Resident Evil 7’s Kitchen or let them bask in the absurdity of Job Simulator or I Expect You to Die. These are all great games, but they’re mostly made great by the sight of others experiencing them. For the first time, however, I’ve found a VR game I want to play alone – and that feels like a major step for the medium.

That game is Lone Echo, the latest release from Oculus Studios developed by Ready at Dawn, the developer best-known for the PSP God of War spin-offs and The Order: 1886. It’s one of the first VR experiences I’ve played that feels like a truly, fully fleshed out triple-A experience that isn’t focused on multiplayer or other sandbox, make-your-own fun experiences. This is a full-on story-driven adventure – and it’s one that feels perfectly suited to VR. 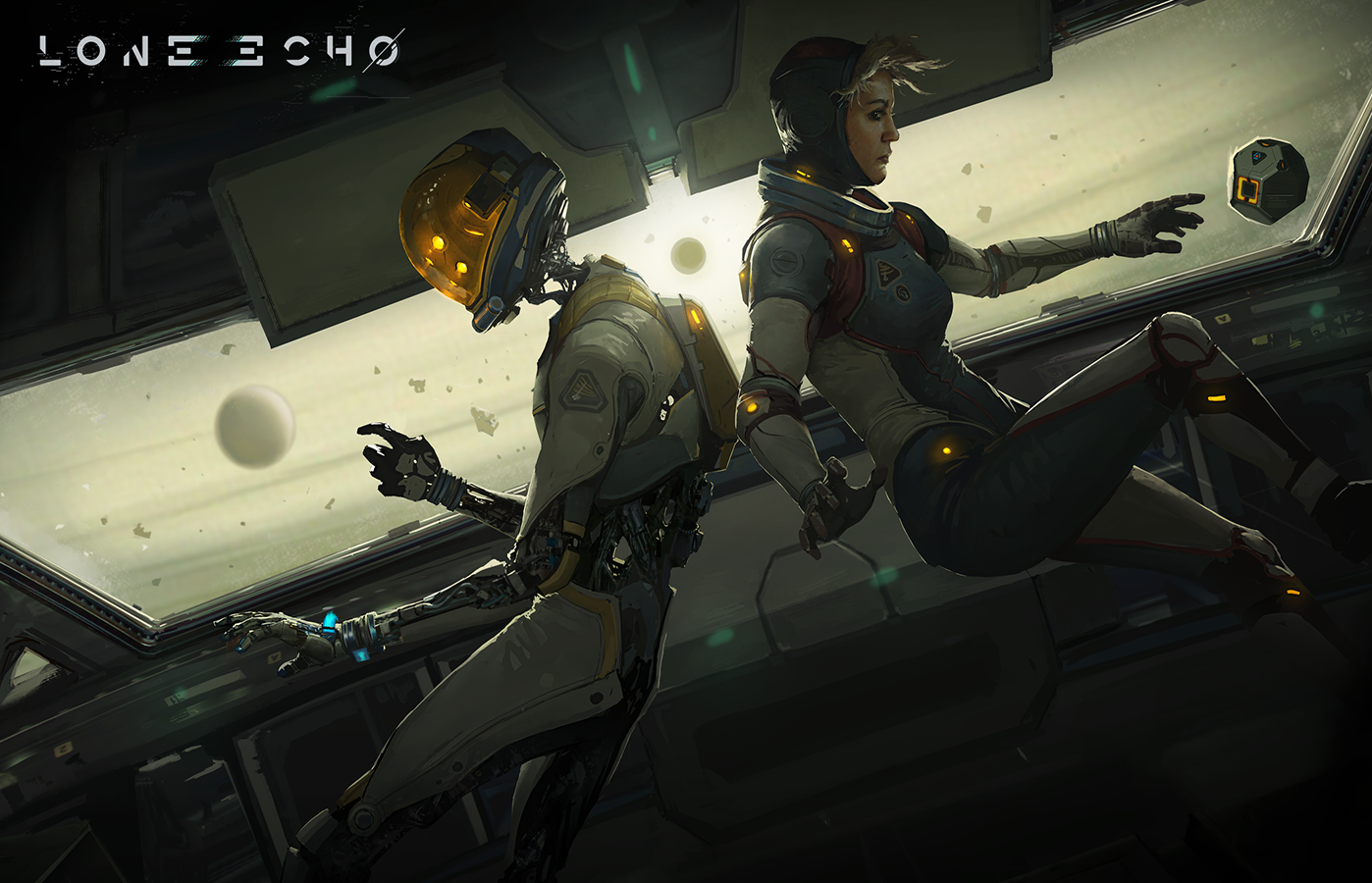 “I’m still something of a VR skeptic, but Lone Echo is the type of game that we need to keep seeing to prove this medium’s true potential.”

Lone Echo casts you as Jack, an AI robot chap that’s aboard a space station with a bunch of other robots less intelligent than you and Olivia, the human captain. The opening hour or so of the game is a gentle, slow burn that teaches you how to move in the environment and introduces you to the cast, of which the station itself is a major member.

Movement is the first place where Lone Echo seems like it’s truly approached VR from the bottom up, the end result a hugely satisfying and comfortable way to move around. With the Oculus Touch controllers and some decent room space you can move around 360 degrees simply by twisting yourself this way and that, but deeper movement takes advantage of the fact Lone Echo is set in space brilliantly. Firstly, you have access to basic jets at your wrists that can be activated with a press of a button on the Touch controllers. You can angle your hands in a direction and boost yourself slowly in that direction via that. Simple.

The jets are slow however, and the real way to get around is presumably not that dissimilar to how it really works in space – by grabbing hold of walls, tables and other surfaces and pulling yourself along, using momentum to propel yourself across a room in the direction you desire. The simple, intuitive design of the Oculus Touch controllers means this all feels very natural, and in no time at all you’ll be comfortably grabbing onto surfaces to clamber and sling your way around the station while using the jets to make fine adjustments.

Resident Evil 7 in PlayStation VR has been my favourite story-based, in-depth VR experience so far, but even that suffered from movement problems. Moving about using control sticks in VR is a recipe for disorientation, and that’s the most surprising thing about Lone Echo’s deft solution to the problem – it feels entirely natural, and at no point did it give me motion sickness.

It’s also by far and away the VR character movement solution that has been the least illusion-shattering to my brain, with the suspension of disbelief coming easily. The movement is hard to completely articulate, but watching a video of the game will make how it works very clear.

Much else about the controls is similarly intuitive and tactile-feeling. To activate a scanner or other such tools you’ll have to use one hand to prod at buttons on the other wrist – and it feels natural. There’s something deeply satisfying and tactile about how Lone Echo’s control systems interact. Crucially, it all feels natural.

You might have an item in hand and need to scan it; you’ll thus release it to weightlessness in order to activate your scanner with two hands, then grab the item again and scan it. You might need to cut something with a laser with one hand while steadying yourself to hold steady in place with the other hand. It becomes a cool little test of speed and dexterity, and there’s not much to say other than it simply works. In VR, which has had very mixed fortunes, feeling so natural and right is actually a bit of a revelation. 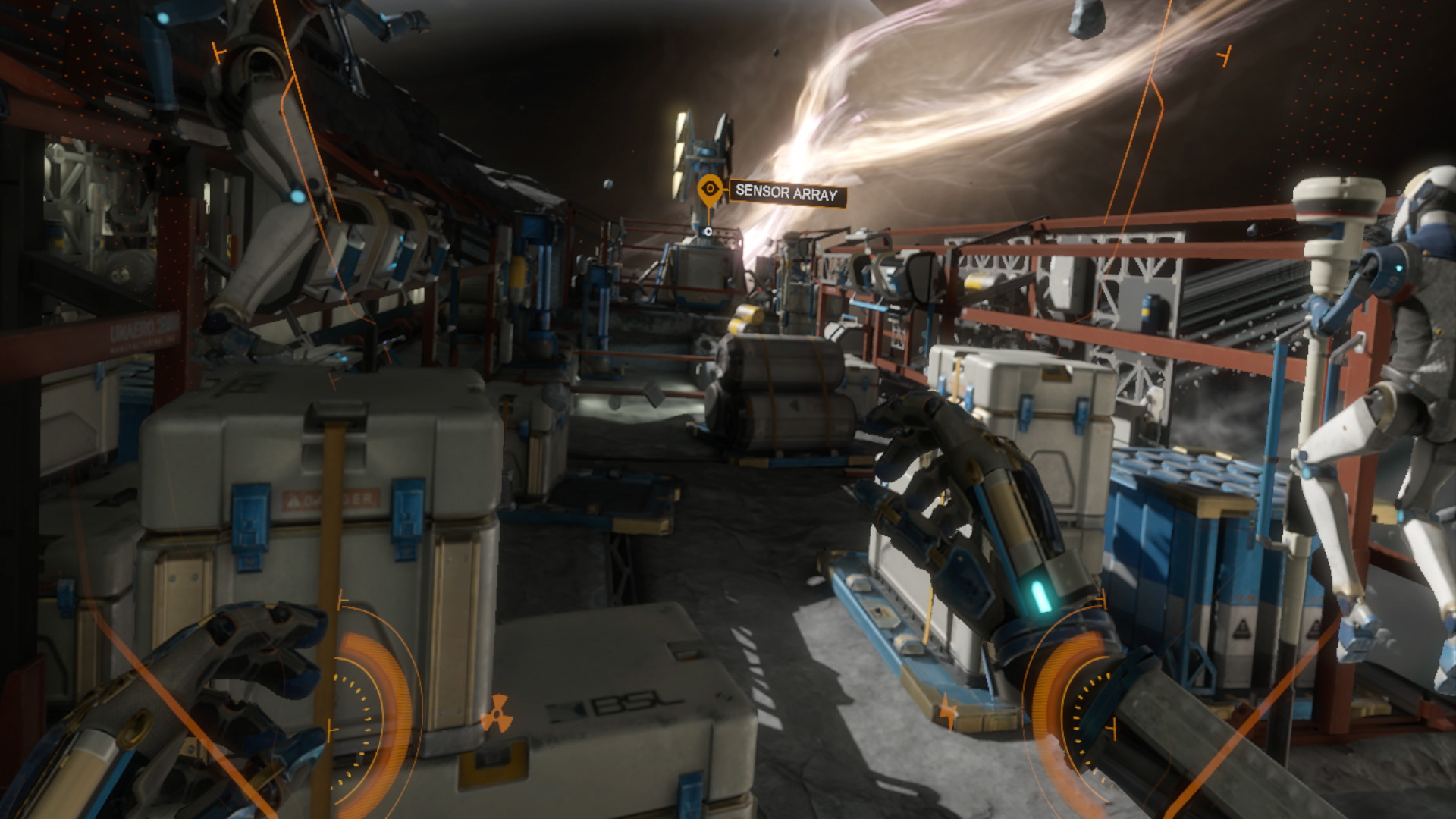 “There’s something deeply satisfying and tactile about how Lone Echo’s control systems interact. Crucially, it all feels natural.”

Lone Echo wraps all this up in a satisfying package that manages to pull off a compelling little story that you’ll want to see through. The fact that the game doesn’t seem to snag itself on the most basic of concepts such as character movement seems to really free it up to run with an interesting story that’s full of spectacle and fairly reminiscent of the movie Gravity – and that is said as a strong compliment.

Lone Echo also ships with Echo Arena as part of its package. Echo Arena is currently free stand-alone for three months, but Lone Echo owners get it permanently as part of the package. It uses the same basic movement design from the single-player campaign but in a Tron-like setting which is part Frisbee, part Rugby, and really surprisingly exhilarating.

Tossing a disc between players in daring passes while others try to intercept and block really lends itself well to the momentum-driven movement, as launching yourself too early or too late could prove a costly mistake indeed. The multiplayer is great fun and is arguably even more special than the single-player content – but I was drawn to Lone Echo by that narrative, a narrative that for once in VR feels supported rather than hindered by the unique control and presentation methods available in VR.

Lone Echo is ultimately a costly game – it’s a reasonable $39.99 / £29.99, but it will require the Oculus Touch controllers, the Rift itself, a powerful PC and ideally a third Oculus sensor to make the most of the tracking. If you have all of this already, however, Lone Echo could well be the single-player killer app VR has been waiting for. I’m still something of a VR skeptic, but Lone Echo is the type of game that we need to keep seeing to prove this medium’s true potential.