PlayerUnknown’s Battlegrounds creator Brendan Greene doesn’t bend the rules for anyone, even when it comes to one of the game’s biggest Twitch streamers.

Dr Disrespect, the Twitch streamer in question, broken one of the game’s rules by killing a teammate to free up space in a vehicle. Non-accidental team killing is against the game’s terms of service and would get anyone banned when reported, not to mention being frowned upon in any game.

Unfortunately for Dr Disrespect, he did this on air and everyone got to see it. The video below shows the incident from the perspective of Grimmmz, another Battlegrounds streamer who was in his squad when this happened.

It’s worth noting that the player who got killed was only someone the matchmaking threw into the squad.

Dr Disrespect is a character, of course, by Guy Beahmand. Though some of his over dramatic antics bring a tonne of views every day, it seems he went a little too far this time.

If you break the rules in @PUBATTLEGROUNDS… no matter who you are… you're gonna have a bad time!

The ban appears to not be permanent, as Brendan ‘Playerunknown’ Greene later tweeted that he’d see him “in a few days.”

However, Dr Disrespect responded to the ban with threats of violence, which, much like the rest of his persona, were likely not meant in a serious way. 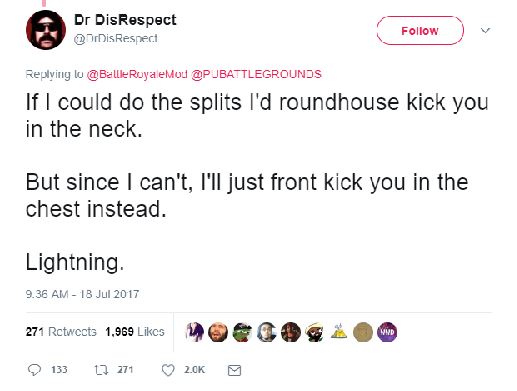 Brendan Greene did take them seriously, however, and it brought back memories of an event he didn’t want to remember. The game’s creator explained in a longer note why he takes threats of violence seriously, and rightly pointed out that it could send some people into a panic attack or worse.

I am not butthurt. I just wanted to make a point that threatening violence, even as a joke, is not cool.

“When I was in college, many years ago, I had a disagreement with my flat mate. Instead of talking it out like men, he decided to get aggressive and while I was backing away from him, he kicked me in the chest and put my head through a plate glass door. Thankfully, I don’t suffer from any ill effects due to this experience.

“The point of that story is to attempt to explain why I think even the threat of violence is not something that should be joked about. Given my experience in college, and the fact that The Doc’s threat, even as a joke, synced up closely to a bad experience I endured, it could have brought up bad memories, triggered a panic attack or had other consequences The Doc might not have intended when composing the tweet.”

Let this be a lesson, folks. Don’t team kill.