What’s next? Captain Jack in space? 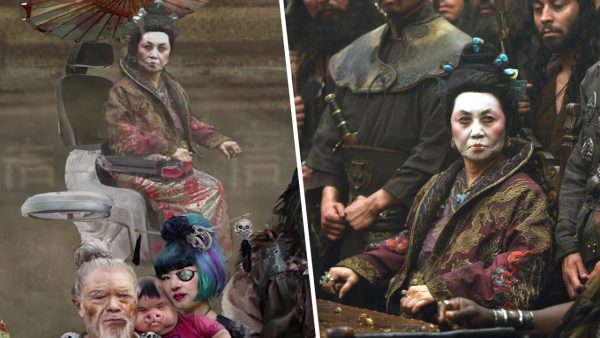 Players have been waiting a long time for word about a new Beyond Good & Evil game, so it’s only natural that we’d pour over every single piece of news Ubisoft offered at E3 – perhaps more than one concept artist may have liked. It turns out the concept art presented during the event clearly borrows a character from another popular pirate series: Pirates of the Caribbean’s Mistress Ching.

In some cases, I’d be willing to view this as a coincidence, but there’s way too much lining up here. As noted on AllGamesDelta, if you watch Ubisoft’s recent crew video and compare it to Ching’s appearance in Pirates of the Caribbean: At World’s End, almost everything lines up. Ching’s hair, dress, jewelry, make-up, and even her hair clips match across both versions. The biggest difference Beyond Good & Evil 2’s art has is the sci-fi hover chair, unless there’s a deleted scene from World’s End I’m not aware of.

One of Ubisoft’s concept artists probably received the direction of “create a diverse, science-fiction pirate crew” and borrowed Ching’s imagery from the films. Not that there’s anything wrong with using other characters as inspiration – it’s not like this is the finished game after all. That being said, if Mistress Ching (or Johnny Depp) appears in Beyond Good & Evil 2 at launch, someone’s lawyer will probably start making phone calls.