The upcoming DLC for The Legend of Zelda: Breath of the Wild includes a familiar helmet from Twilight Princess. 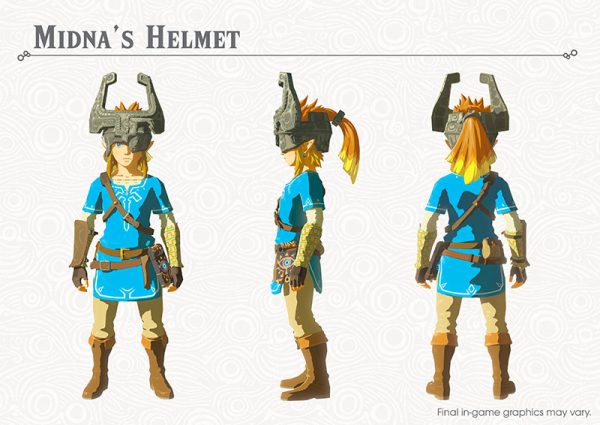 The Legend of Zelda: Breath of the Wild is set long after the events of previous games, so there’s lots of room to reference 30 years of Zelda lore. One example comes straight from DLC Pack 1: The Master Trials, where players can uncover Midna’s Helmet from a hidden chest somewhere in the game.

Nintendo recently detailed the helmet’s history and mechanics while counting down the DLC’s launch, much of which will be familiar with Twilight Princess fans. Midna was first introduced as a supporting character in that Gamecube (later Wii) title, where she followed Link and fought enemies alongside him. Midna also made a recent appearance in Hyrule Warriors as a playable DLC character.

That being said, Midna’s helmet in Twilight Princess isn’t exactly the same as Breath of the Wild’s. While that version was forged by shadow magic in an alternate world, the BotW Midna’s helmet has no such affiliation. Instead, it increases Link’s resistance to Guardians, which can be quite a useful ability while exploring the game world.

Midna’s Helmet, along with other new equipment included in the DLC, was announced in May by Nintendo, and again during E3 2017 in June.

The Master Trials launches on June 30, 2017. It is currently only available by purchasing a Breath of the Wild expansion pass.