Let’s do a quick recap in the off chance you’re still unfamiliar with the situation.

During Microsoft’s Xbox E3 2017 Briefing, it was announced all versions of Minecraft would be unified across platforms. This included Nintendo Switch, but not PlayStation 4.

When the community, legitimately asked for an explanation for the lack of PS4 support, it was said Sony refused to support cross-platform play, but Microsoft would “love to have” PS4 on board.

It was thought because Minecraft cross-platform play requires users to sign into Xbox Live on all participating platforms was the reason Sony refused.

On Tuesday, Nintendo broadcast its pre-recorded E3 segment where it was announced Rocket League was coming to Switch. It was revealed the game would feature cross-network play between PC, Switch and Xbox One. Again, PS4 wasn’t included in the mix.

Psyonix’s Jeremy Dunham said Sony didn’t grant the studio permission to provide cross-platform support on the PS4 version of Rocket League. Since Psyonix runs its own servers, every version of the game connects through that system. Because of this, should Sony ever allow cross-play with PS4, it would just take “the push of a button” to unite all platforms on Psyonix’s end. Dunham previously touched upon this subject back in July 2016.

“Exposing what in many cases are children to external influences we have no ability to manage or look after, it’s something we have to think about very carefully.” – Sony’s Jim Ryan

Speaking in an interview with Eurogamer, which we covered here, Sony’s global sales and marketing boss Jim Ryan said the company doesn’t have a “profound philosophical stance” against the idea of cross-network play, as it’s “always open to conversations with any developer or publisher who wants to talk about it.”

“Unfortunately it’s a commercial discussion between ourselves and other stakeholders, and I’m not going to get into the detail of that on this particular instance.”

Ryan went on to say Sony also has a responsibility when it comes to the safety of its install base, particularly due to the young demographic of the Minecraft audience.

“We have a contract with the people who go online with us, that we look after them and they are within the PlayStation curated universe,” he said. “Exposing what in many cases are children to external influences we have no ability to manage or look after, it’s something we have to think about very carefully.”

However, he also said nothing is ever a “done deal,” when it comes to cross-platform, and “anybody who is dogmatic in that manner is typically a fool.”

Now you’re caught up, again in case you’ve been away or something, let’s hear how Microsoft reacted to Sony’s explanation for why it axed the idea. 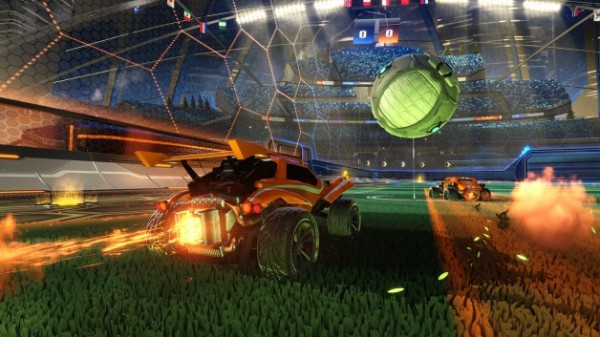 Speaking in a Giant Bomb livestream during E3 2017 this week (thanks GI.biz), Xbox boss Phil Spencer told Jeff Gerstmann that while platform competition does play a role when it comes to making decisions at Xbox, he wants to make platform decisions “that are good for the industry.”

“We would never put Minecraft in a place where we felt like we weren’t keeping our players safe.” – Xbox’s Phil Spencer

“It’s not a win lose,” he said. “We can do just fine with other people’s consoles succeeding. We’re shipping Minecraft on the Switch with Nintendo, and it’s great. That’s a win-win partnership.”

When asked about Ryan’s comments regarding Sony’s refusal to join all players together, Spencer seemed a bit confused over the comment.

“The fact that somebody would make an assertion that somehow we’re not keeping Minecraft players safe I found – not only from a Microsoft perspective, but from a game industry perspective – I don’t know why that has to become the dialogue,” he said. “That doesn’t seem healthy for anyone.

“We can always do better with everything we do, but I feel great about our relationship with Minecraft. I just really found the whole discussion around safety in our game, and that somehow we wouldn’t take that as a top priority. We would never put Minecraft in a place where we felt like we weren’t keeping our players safe.

“Frankly, through the parental controls on Xbox Live and everything we’ve done, we’ve shown that [safety] is very important to us as a platform.”

Spencer then somewhat mirrored Ryan’s statement of “the door” always being open to further discussions in the future, and concluded the subject stating that Microsoft remains committed to unifying the entire Minecraft community.

Hopefully, sometime in the near future, all Minecraft and Rocket League players will be able to play together as one massive community regardless of platform preference.