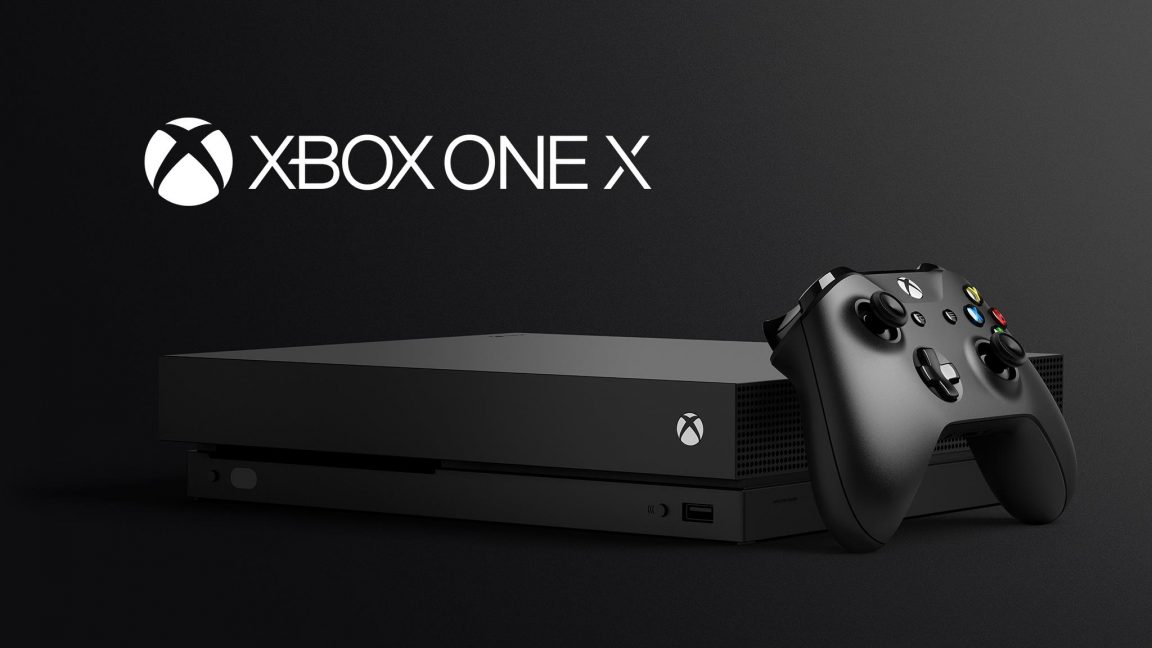 “I watched a dude in the audience kiss his plastic lanyard, like a catholic kisses rosary beads in gratitude.”

Welcome to the growing cult of Xbox One. In the minutes before Microsoft pulled out its big guns for the Xbox One X reveal yesterday I watched a dude in the audience kiss his plastic lanyard, like a catholic kisses rosary beads in gratitude. The Xbox fans Microsoft invited to its E3 showcase were delirious, whooping a recorded safety announcement about the fire exits. A tiny boy sat with a giant Master Chief helmet on, looking like his neck could barely support the weight – an orange on a toothpick.

The whole place erupted for Phil Spencer, a likeable suit in a world of corporate grins. The 4K LED screen projecting Forza’s incredible skies across the Galen Center was the Eye of Providence. Bow down to your creator. It was glorious and mesmerising. Or as a guy close to me muttered: “that looks dope as fuck, bro”. He was right.

“We live by the mantra: there’s no power greater than X,” said Spencer before revealing that awkward Xbox One X name that sounds a little too close to Xbox One S when said aloud. A text message popped up on a colleague’s phone: “wait, is this a new console?” 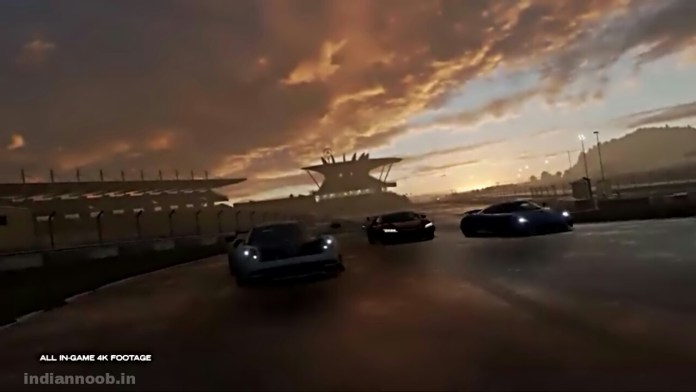 It’s not a new console as such and really it’s not a console for the masses, either. This is the console Microsoft is selling back to the devotees who’ve already bought the Xbox One and the Xbox One S and the 4K TV to play it on. That $499 price tag stings unless you’ve got the disposable income and you’re a hardcore fan, in which case it’s a no-brainer. For those of us who can’t afford it, well, it’s not for us. Not for a couple of years, anyway.

After more hollerin’ for the “liquid cooled vapour chamber” and other tech specs that made my eyes momentarily glaze we got stuck straight into the games. And this was without a doubt one of the most packed showcases from Microsoft I can remember. Spending almost two hours showing games was absolutely the right thing after a quiet start to the year and many of them were dated for 2017. It was a confident, well-paced bang-bang-bang of games, games, games.

“This is the console Microsoft is selling back to the devotees who’ve already bought the Xbox One and the Xbox One S and the 4K TV to play it on.”

It was diverse roll out too and I’m not just borrowing Spencer’s lines here. Or it was as diverse as games are right now, full of loot-shooters, indie beauties, car fetishisits and shout-casters. Although MS was catering to its devotees, it understood not to put them front and center like EA did days earlier, where the script stuck and the rabbit-in-the-headlights made for awkwards presentations. This was as slick as E3 gets.

So Forza 7 looked stunning, it’s obsessive details and shiney surfaces doing the impossible and looking better every year it trundles onto the track. Metro Exodus grabbed attention like a knife in a rat’s eyeball, scripted and brutal, gloriously bleak and nasty.

Our first look at Assassin’s Creed Origins teased hippos and crocs and surfing down a pyramid and thank the gods of internet traffic that its back. PlayerUnknown’s Battlegrounds is a great scoop for the Xbox and a perfect fit. It looks a little janky as always, but it’s as refreshing as a frying pan to the face. Also janky-looking is State of Decay 2. Unfortunately there’s no wit around that game, just a grumpy will to survive in world of zombies. Like its weary protagonists it looked tired. 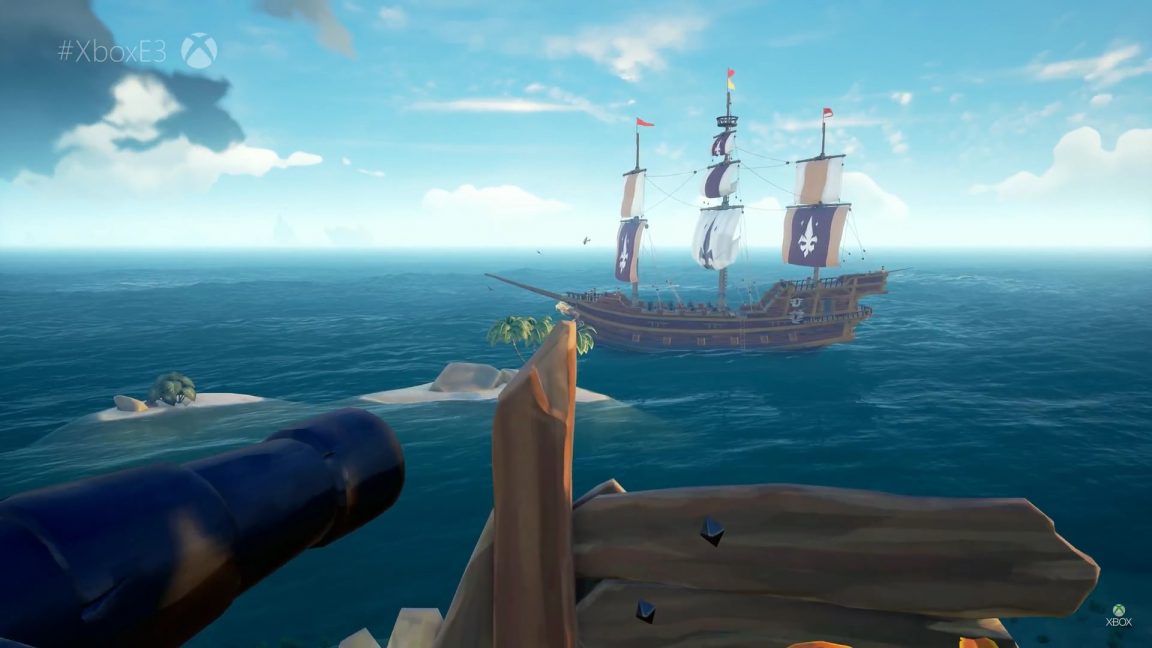 It was at this point that “console launch exclusive” began to repeat itself but I was too busy enjoying the spectacle to think too much about it. I mean, it’s going to be one of those phrases that turns out to be nonsense in a couple of months. Let’s not worry about it and let Microsoft have its moment of glory.

Christ, what was that Darwin game with the awful shoutcaster belting out gibberish? I never want to see or hear it again. I’m not even going to Google it. Minecraft though! Fuck yeah. Super duper graphics, cross-platform play with Switch but not Sony, llamas and fun. I love Minecraft, we all love Minecraft, don’t we? Not liking Minecraft is like kicking a puppy.

What else looked good? Black Desert looked great for the MMO nerds. The Last Night’s morphed take on pixel art should appeal to the indie chin-strokers. The Artful Escape for anyone who wants to sit down and giggle what the fuck is this prog rock oddity I like it. 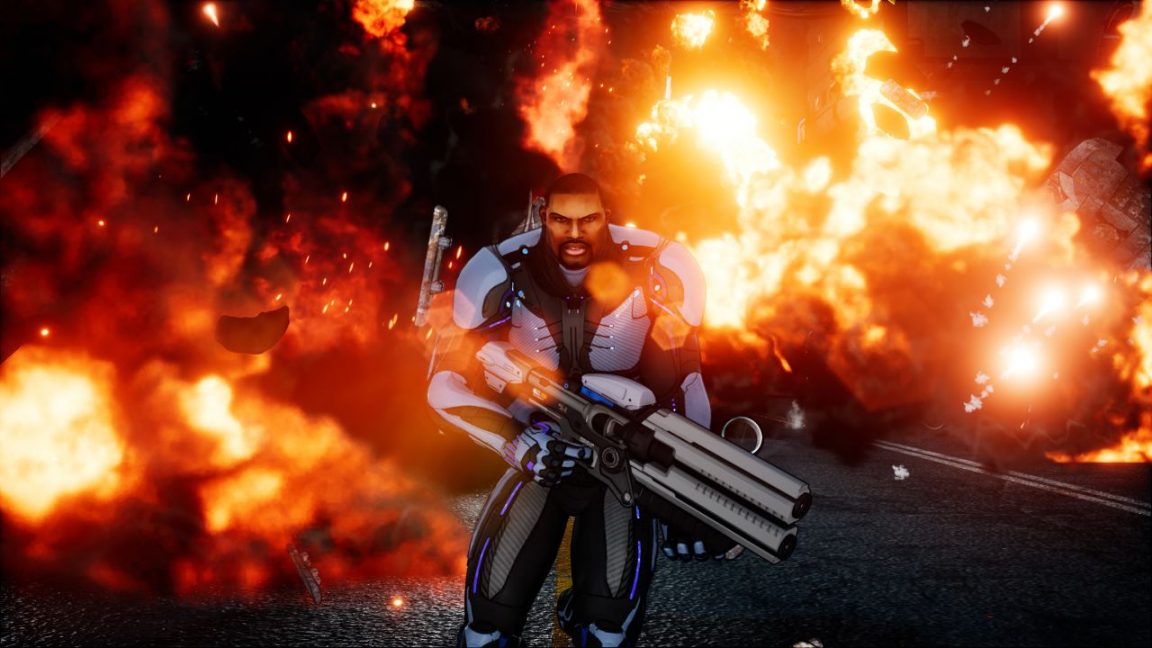 It’s at this point that I am pleased to say I finally got Sea of Thieves. I could never really get my head around Rare’s whimsical pirate nonsense but after watching the four-player adventures I’m completely sold. If it genuinely plays like that then it has become my most anticipated Xbox One game by a significant margin and I want to be shot out of a cannon across the roaring seas.

If Sea of Thieves is my most anticipated, Crackdown 3 has suddenly plummeted to most disappointing. Terry Crews is an absolute perfect choice for the game but the brief trailer was quickly glossed over and forgotten. You can’t talk about dropping buildings on people and then not show a building dropping on someone. The way Microsoft swiftly moved on shows a worrying lack of confidence in what was once going to be an Xbox powerhouse. I hope I’m proven wrong when it does release. 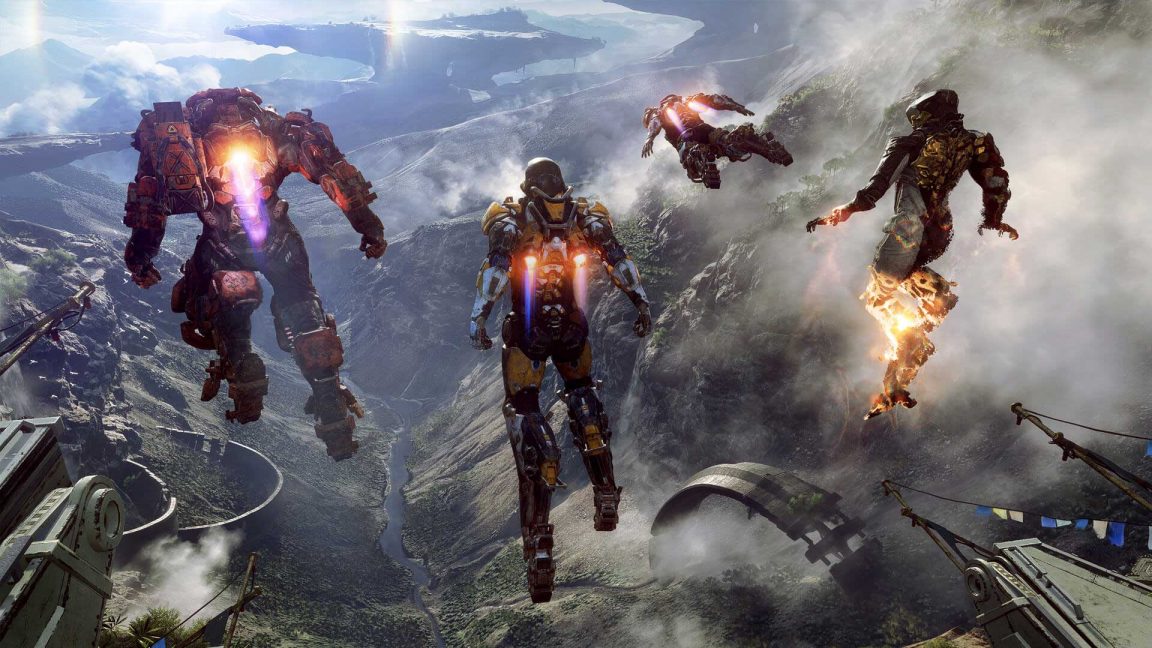 And still they came; Cuphead, Life Is Strange: Before the Storm, Tacoma, Code Vein, Ori and The Bloke On The Grand Piano. And then two big third-party demos that did a great job of selling the games. Shadow of War’s dialogue was a hoot, the quipping of grumpy orcs a nice contrast to the more pompous hero. I wish I had an orc companion to accompany me at E3 this year, cracking a few skulls every time I overhear someone talking about framerates.

“Terry Crews is an absolute perfect choice for Crackdown 3 but you can’t talk about dropping buildings on people and then not show a building dropping on someone.”

We’ll pause here for backwards compatibility, the is it, isn’t it service that will soon have a whole bunch of original Xbox games on it (or “OG games” as Microsoft called it, like Ice-T and Darlene before he met Coco). I use backwards compatibility a lot (how else can we play a Skate game in 2017?) and as the announcement got the loudest screams of the day it’s clear you lot do as well. How many good OG Xbox games were there again?

As we neared the end of the conference I’d completely forgotten that Spencer hadn’t mentioned the price of the Xbox One X. And then he did and we kind of sucked in our breath like we’d just witnessed a severe shin-grazing incident. Four hundred and ninety nine American dollar bills. I don’t know man, that’s a lot of money – although not when you consider the tech, the hardware, the damn beautiful and small little powerful games console package that you get for that. Yes, it’s the most expensive games machine on the market. It’s not for all of us at that price but like I said earlier, if you can, you will. 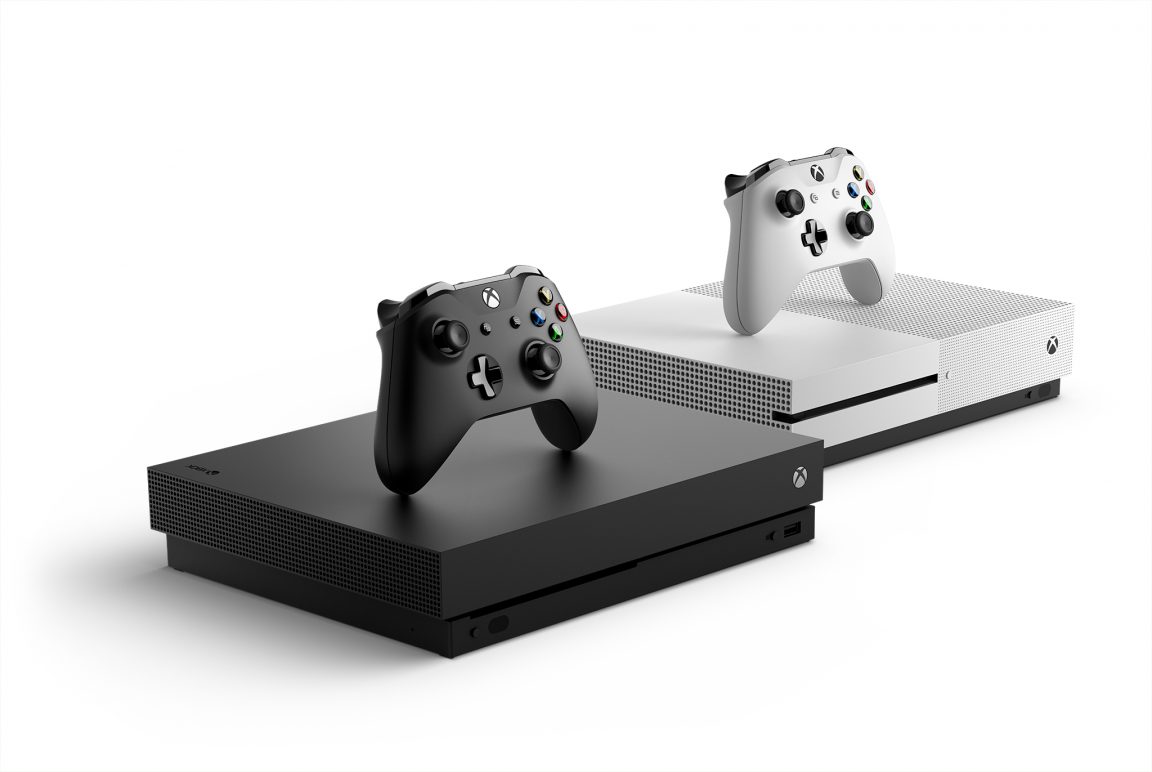 And finally it was the turn of Anthem, Bioware’s open-world loot shooter that had been teased a day earlier. It’s a difficult sell and I think we’re all remaining optimistic. It looked stunning and familiar. A third-person Destiny with a bit of Titanfall and The Division. I hope those exosuits really do have deep customisation options though, because I need to be a little more flamboyant. Please don’t fall into The Division’s trap of having 100 different cargo trousers. My real world is bland enough. Still, combat looks punchy and who can resist the chance of earning a new Legendary?

So that was it, a good show from Microsoft of an absolute stack of games and a new console to boot. There are questions – the confusion of multiple Xbox One’s and how to make the differences clear, the support for 4K updates of existing games, that high price. But it honestly feels like the Xbox One X is a console designed for those who are already obsessive about games and the Xbox, not anyone new to it. It might be an exclusive club, and these fans don’t care. They’re loyal to the brand, devoted to the power of X and they’re going to be all over 4K gaming by the time the year is through.