Here’s another Skull and Bones video for you, giving you a walkthorough of the game’s PvP.


It shows rival pirate gangs fighting it out on the high seas of the Indian Ocean.

Don’t miss a single E3 2017 presentation. Keep track of all conference times for PlayStation and Nintendo through this handy link.

According to Ubisoft, ever since Assassin’s Creed 4: Black Flag, the team at Ubisoft Singapore started testing what combat would be like with two player captains. According to producer Arnaud Vaudour, the team was pleased with the results. The experiment turned into Skull & Bones

The pirate game is set across the varied cultural seascape of the Indian Ocean, and tasks players will starting out as an “upstart captain,” and becoming a pirate kingpin. They will be able to command their own warship and prey upon merchant convoys, rival pirates and other players to gain riches untold.

And combat can change from single-player and evolve into a multiplayer.

Players start out with one boat and eventually gain multiple warships in the fleet to choose from. Each deck of the ship will feature crew members performing tasks and manning posts making the ship feel alive. When sailing up to an ally, players will see it too is a lively vessel. But each ship will be customized differently depending upon the player’s choices.

As players gather riches, they can further tailor their ship both cosmetically, and tactically. How rich another player happens to be will also be shown by the look of their ships and will convey the vessel’s various capabilities. Learning to “recognize ships at a glance, or scouting them from the crow’s nest,” will be an important factor in determining how to go about planning a successful raid. 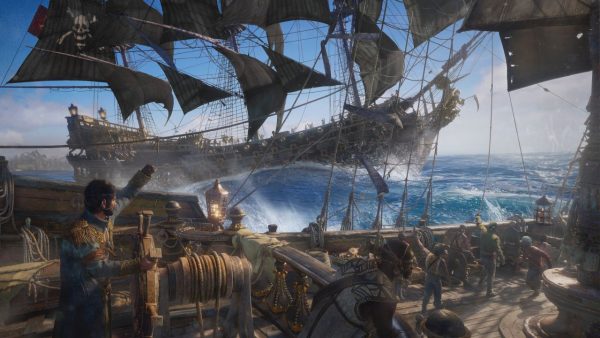 Warships are grouped into classes and there are three classes to choose from in Loot Hunt, the 5v5 PvP multiplayer mode being shown at E3, but more are planned for launch and beyond.

One warship is the heavy-hitting Frigate, which is dangerous in close quarters and it can also take a lot of punishment. It can also protect weaker ships in the fleet by acting as a barrier.

The Brigantine is a fast raiding ship which can close the distance fast for a nice ramming of an opponent’s hull. Once that happens, prepare to be boarded.

There’s also the Sloop-of-war which is a light-weight ship which is perfect for dealing long-range damage.

Each ship looks different, so players will need to pay attention to what’s on the hroizon before engaging. If not, they may regret it.

In order to survive in battle, players can choose strategic customization by planning their loadouts, improving firepower and the like.

Going back to amassing riches, there will plenty of opportunities to do just that in both PVE and PvP.

“You’ll be able to find out what’s being delivered across trade routes, get inside information to help you plan your attacks,” according to game director Bill Money. “Once you’ve learned this info, you can choose to go after targets that are really valuable to you.” 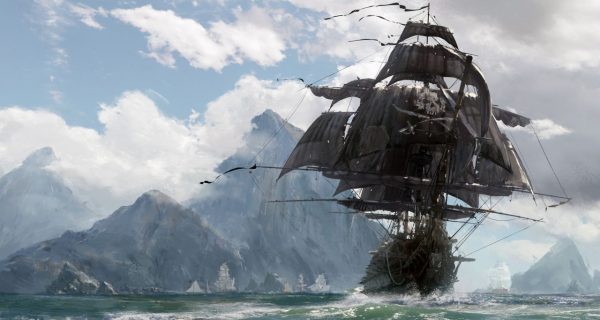 Of course, there will also be corporations and empires to battle, which is when friends will come in handy. Players can form guilds which allow the pooling of resources – but beware of betrayals. It can happen.

For example, five teammates can sail into the territory of merchant fleets. The convoys pack firepower and lots of moolah. Players will not only need to set their fleets up properly, use each ship to it most tactical advantage, and pay attention to the wind. The latter adds a tactical layer which can both help and hinder. The player may be blown off course, stall, or be thrust right into harm’s way.

The mini-map in the corner of the screen will come in handy in such cases, as it will show details on the ocean currents. Paying attention to the ship’s sails will let the player know how strong the wind is, so will the ropes and the sound of the wind will also be an indicator.

Knowing when to adjust the sail’s positions to slow down or speed up will be important, as when sailing in real life, and some ships will include and anchor which is strong enough to stop the ship in its tracks to gain a damage buff.

Finally, as noted in the stage presentation for the Skull and Bones, the game world is reactive. When the player takes action, the world will react with them.

There’s more detail in the post on the Ubisoft Blog than what was pulled. Go give it a read.

Ubisoft said a beta will be held for the game, and you can sign up for it. The link wasn’t working earlier, but it’s good to go now. Just click on your preferred platform.

Skull and Bones is slated for fall 2018 on PC, PlayStation 4 and Xbox One. It will also be enhanced for PS4 Pro and Xbox One X.