For the next week, you can get games like Horizon Zero Dawn, Mass Effect: Andromeda, and Nioh for up to 50% off. 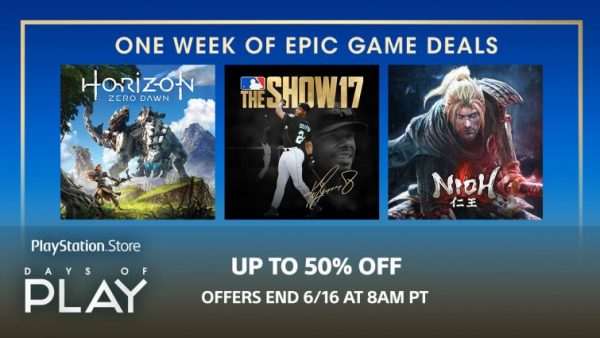 When Sony unveiled its “Days of Play” event, it wasn’t just to showcase a new PlayStation 4 system – it was to introduce a games sale. And with the event finally kicking off, we’ve got an impressive list which includes everything from Battlefield 1 to Nioh, with discounts reaching up to 50%.

What’s more, Days of Play doesn’t just include games. Sony is also offering a free multiplayer week, along with $10 PS Plus memberships for anyone who wants to keep online play going. Finally, anyone who spends $100 or more in the PN Store – including towards PS Plus – will earn $15 in store credit.