DICE provided a little more information on the night maps coming to Battlefield 1 this summer during its EA Play event at E3 2017. 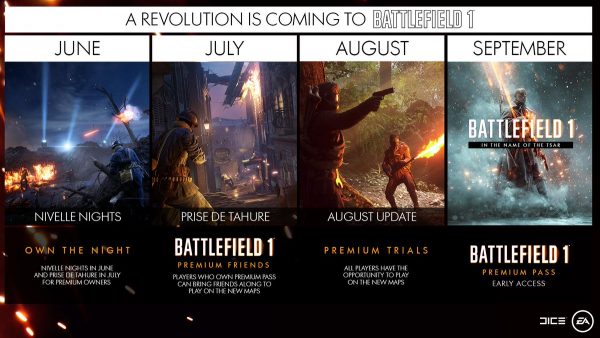 As previously reported, the Nivelle Nights map will arrive in June. It will be released for Battlefield 1 Premium Pass owners and those who have the They Shall Not Pass Expansion Pack.

Here’s a description: “Nivelle Nights takes the fight to Chemin des Dames, 1917. As darkness falls over the muddy battlefields around Malmaison and Soupir, French and German batteries prepare to yet again support their troops on the contested ground. The moon, the searchlights, and the artillery light up the night skies, exposing the vast network of trenches. Bite and hold as your foe will fight for every inch of ground.”

The Prise de Tahure map will be released in July, and here is where the French and German armies clash in the trenches of the Champagne-Ardennes region in 1917. The French troops will try to hold on to “re-captured heights in the Butte-de-Tahure,” with the frontline trenches cutting through several villages. Each civilian locals is faces “obliteration from the constant skirmishing.”

While both maps will only be available to Premium members, those who don’t own the season pass will be able to play the maps through Premium Trials after Prise de Tahure has been released. This will kick off in August.

Premium Friends will be available until gamescom 2017 in August, so make a friend with someone who owns the Premium Pass so you can continue to play the maps.

EA announced today the next expansion, In the Name of the Tsar would be released in September.