One of the many features Nintendo didn’t implement in the Nintendo Switch eShop at launch has now finally made it in. 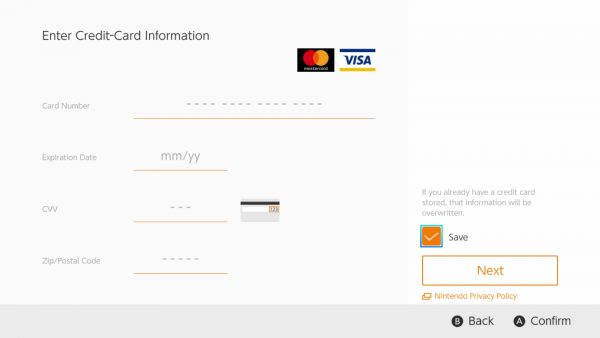 As people started getting their Nintendo Switch consoles back in March, many discovered that the console’s eShop was lacking in many ways compared to what eShops on other Nintendo consoles offered.

One feature in particular that was missing is the ability for the store to save your credit card information once entered, so you can later use it for future purchases. Switch owners, especially those who buy digital games regularly, have had to enter the details every time they wanted to buy something. This basic feature has now made it in.

As reported by Nintendo Everything, the Switch eShop now offers the ability to save your credit card details for future uses. You also now have the option to enable or disable password protection on purchases.

You can check your user profile to see the stored information, though it’s unclear if the eShop can store more than one card.