New to Paladins on PS4 and Xbox One? We’ve got everything you need to get started. 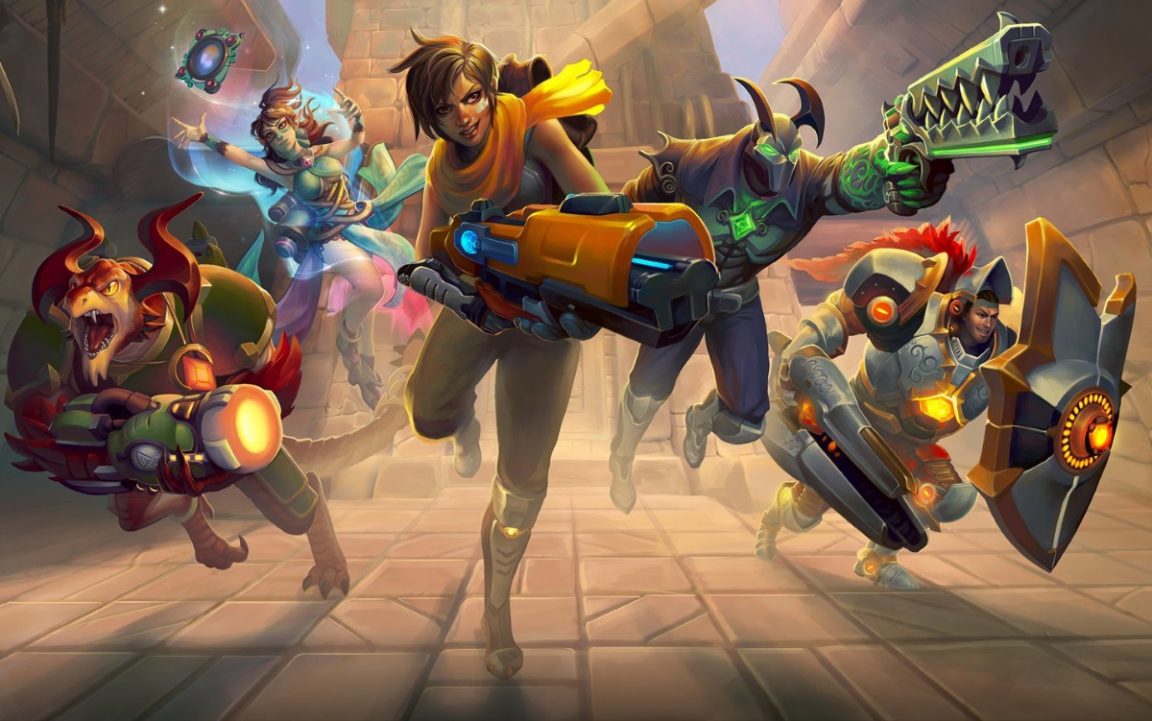 Paladins is the first-person shooter from the creators of SMITE, and it’s only just arrived on PS4 and Xbox One as a free game. Having entered into closed beta back in November 2015 on PC and having been in development for some time before that, it has come a long way since it started. It boasts millions of players on PC, so yes, we reckon you should be playing it whatever your format of choice.

To get the elephant out of the room early: yes Paladins is similar to Overwatch, but no, they’re nothing alike. For anyone who has played both, they’re vastly different. While there’s surface level similarities, there’s more than enough to differentiate both to such a degree that any immediate comparisons would be incredibly lazy. Anyone who has read my previous coverage on VG247 knows full well I’m an Overwatch fan. However, I’ve played a lot of Paladins and in many ways, prefer a great deal of what it offers.

With that in mind, I wanted to put together a beginners guide for Paladins for anyone looking to get into a team based shooter, or for anyone who likely fancies a change from Overwatch. Let’s get started. 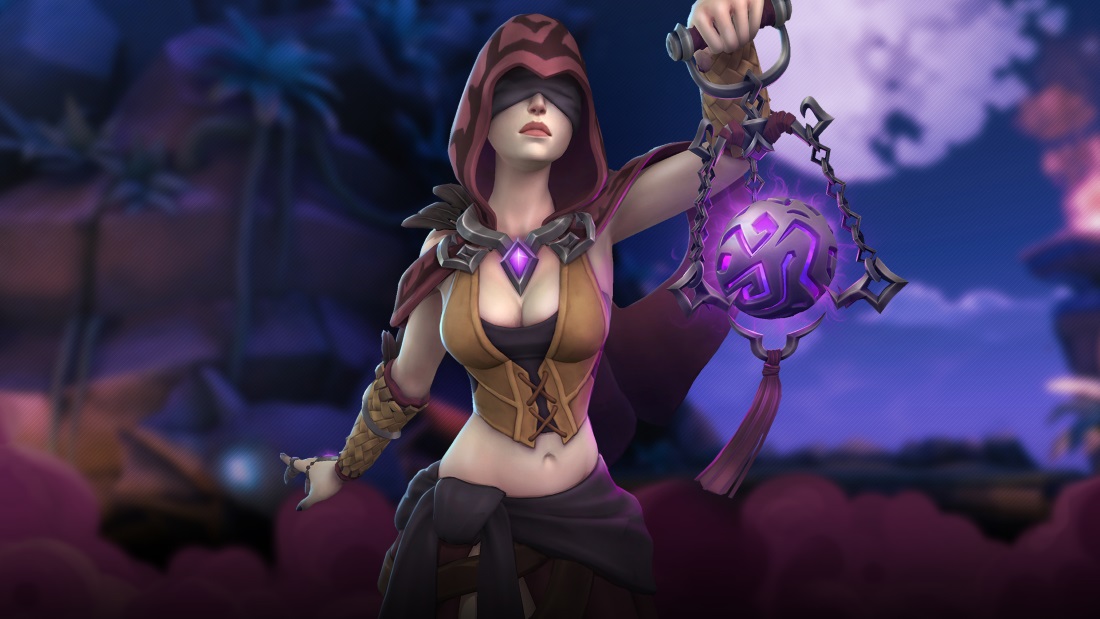 In OB49 (the current patch) there are 27 Champions to choose from. These are subdivided into roles across Front Line, Damage, Support and Flank, with each serving a distinct purpose.

Irrespective of the Champion you choose and the role they play, they all wield a weapon and have a limited action set of 4 skills and an Ultimate. All skills, with the exception of your Ultimate, have a cooldown and as is fairly customary in the genre, Ultimate abilities can only be used once they’re charged.

When it comes to maps, there are a total of 14 across three game modes. These include Siege (an Objective point map that requires escorting a Payload and controlling a Capture Point); Payload (which involves two rounds of pushing and defending the cart) and Survival (effectively deathmatch).

Siege and Payload are undoubtedly the most popular simply because there’s a significant amount of depth available. Not only do you have to draft effectively for both (unlike Overwatch where you can freely switch heroes at any time) but you also have to make use of the maps’ verticality and the flanking routes to and from objectives. Ensuring your team is balanced in terms of offence, defence and flank is incredibly important – so much so that failure to gain a spread of valuable roles (a healer and “tank” is pretty much mandatory) will see you struggle. 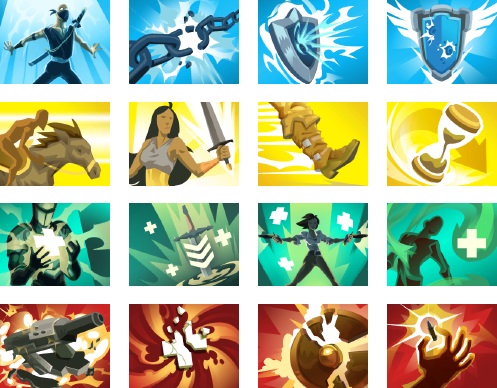 What differentiates Paladins from other team based shooters is its item system. These unique cards are purchased during a match, and allow players to gain benefits based on the four categories of item they can buy. Set across Defense, Utility, Healing and Attack, each of the four items within these categories provides a specific improvement for your Champion. In addition, each item purchased can also be upgraded three times, further improving its potential.

Items can be purchased with Credits that you earn during a match (simply by killing or participating in an objective) and once redeemed against an item, cannot be refunded and your purchased item cannot be sold.

Unsurprisingly and due to the multiplied bonuses of items as you upgrade them (typically by 2 or 3) making the correct item purchase, based on your Champion, is incredibly important. It’s not make or break if you choose the wrong one, but your potential damage output (or utility) will be much weaker.

In total there are 16 items with players typically, across the course of a match, picking up three (upgraded to varying levels). Key to itemising properly is understanding not only the Champion you’re playing, but the role you’re undertaking and the enemy you’re facing. 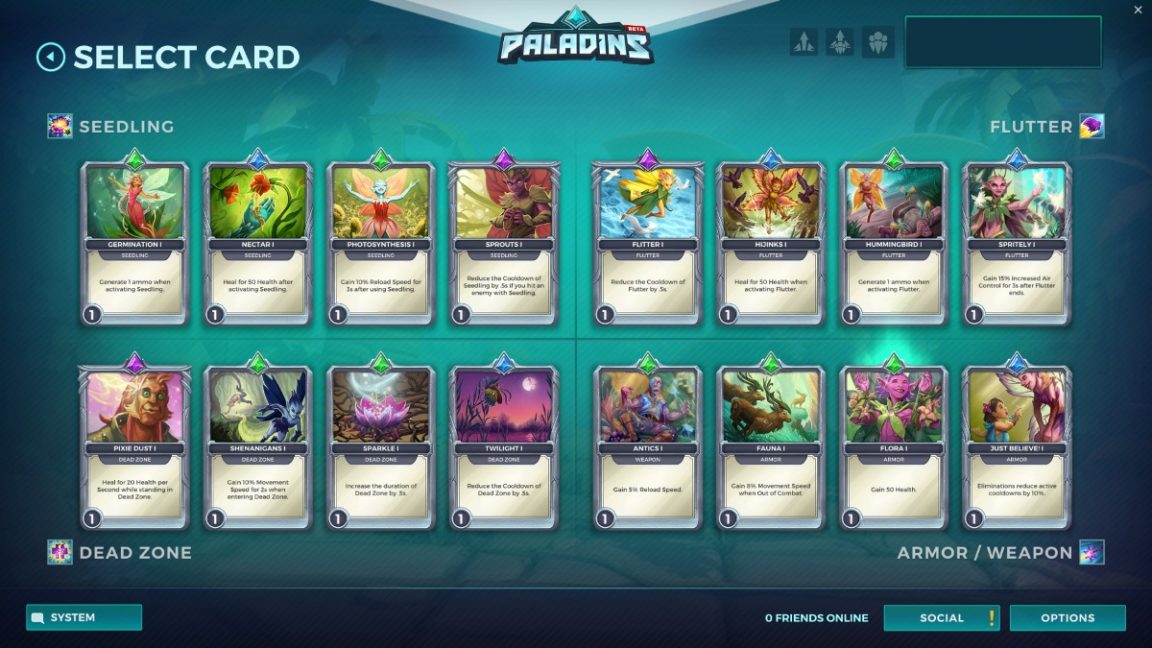 Integral to Paladins is its card system and this, similarly to items, is a further method of customizing your Champion and the way that they play. Unlike items, cards and your loadout are determined before a match and cannot be adjusted once you’ve chosen your deck.

Each Champion has their own card collection, broken down into four parts (typically your first, second and third skill as well as your armor and/or weapon). In addition, each card is allocated a rarity across Common, Rare and Epic.

With a 12 points to invest in each card, their attributes and/or effect increases the more points you spend in them. It’s down to you to decide what you want to improve and by how much.

A complete loadout is made up of 5 cards (which costs 5 points), and you can choose to have those five cards from any of the allocated areas. Building your loadout is as much about how you prefer to play a specific Champion and while I’d argue there are certain card choices that are stronger than others, most – if not all variables – can work out.

As one example, I’ve chosen Willow, the newest Champion in Paladins. As a damage dealer, I wanted to be able to deal more damage with my Seedling, gain greater mobility and have the opportunity to reload quicker and reduce my cooldowns (which is never a bad thing). 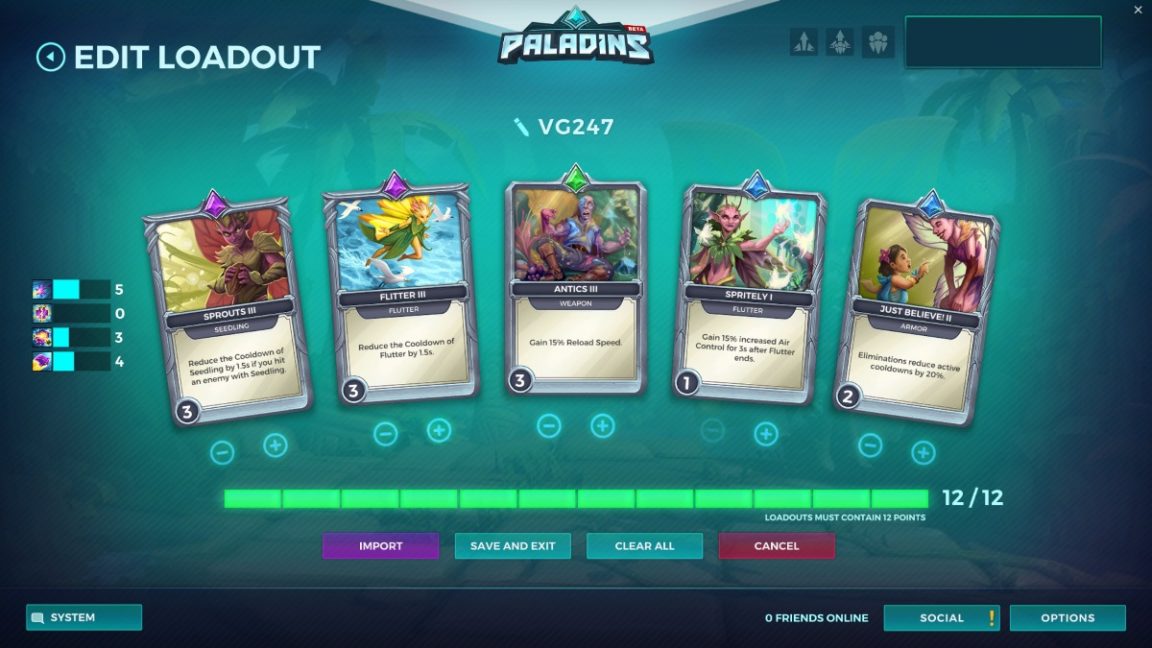 On that basis, I took the following cards (see image above) and spent my 12 points across four of them, in order to find a balance I was happy with.

Based on the number of cards available for each Champion (16 in total) and when factoring in the upgrade values available, there’s lots of variables. Fortunately for new players, base card loadouts are typically solid and will allow you to manage absolutely fine. 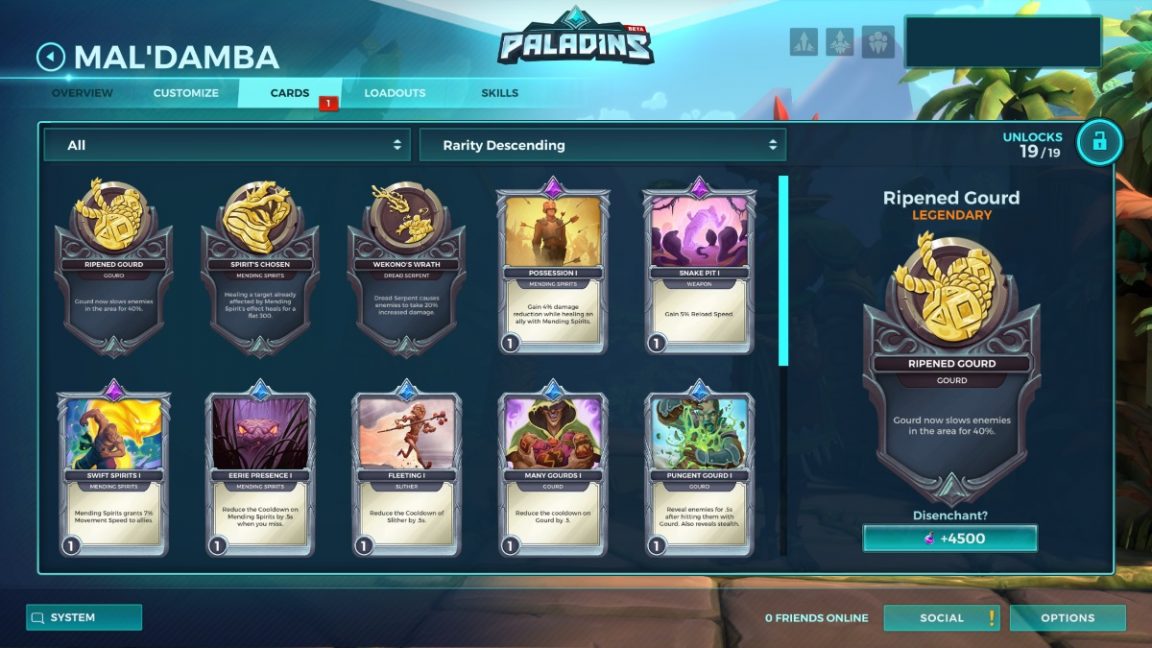 As a third layer of customisation outside of items and loadout building, there are Legendary cards in Paladins. All Champions start with one, with a total of three being available for each. Legendary cards do not form part of your loadout and instead, are chosen at the beginning of a match. These cards are incredibly powerful and significantly improve an aspect of your Champion or their kit.

If we were take Mal’damba as one example (a Support Champion), he has three Legendary cards available:

As you will note, these provide huge boosts to three of his skills – more so than any upgrades can achieve when creating a loadout. It’s up to you to determine which you’d prefer and specifically, what will bring the most value against the enemy team you’re facing.

The only catch to Legendary cards is the fact you will need to acquire enough Essence, for each Champion, to craft them. With each costing 12,000 Essence – for each Champion – it’s expensive. 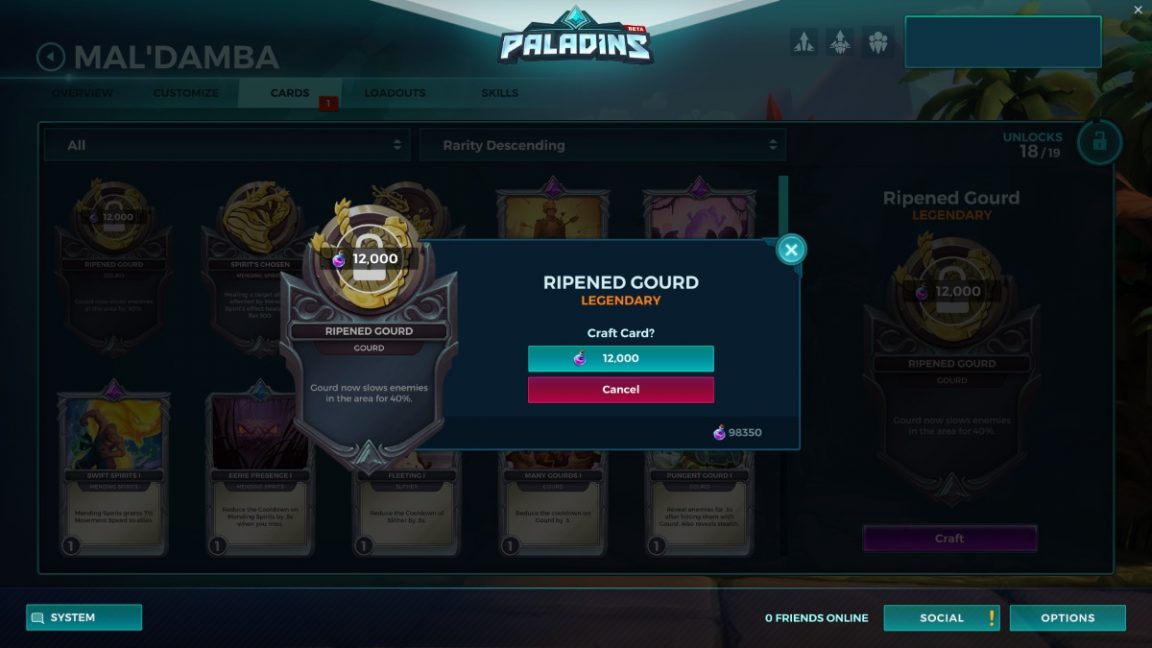 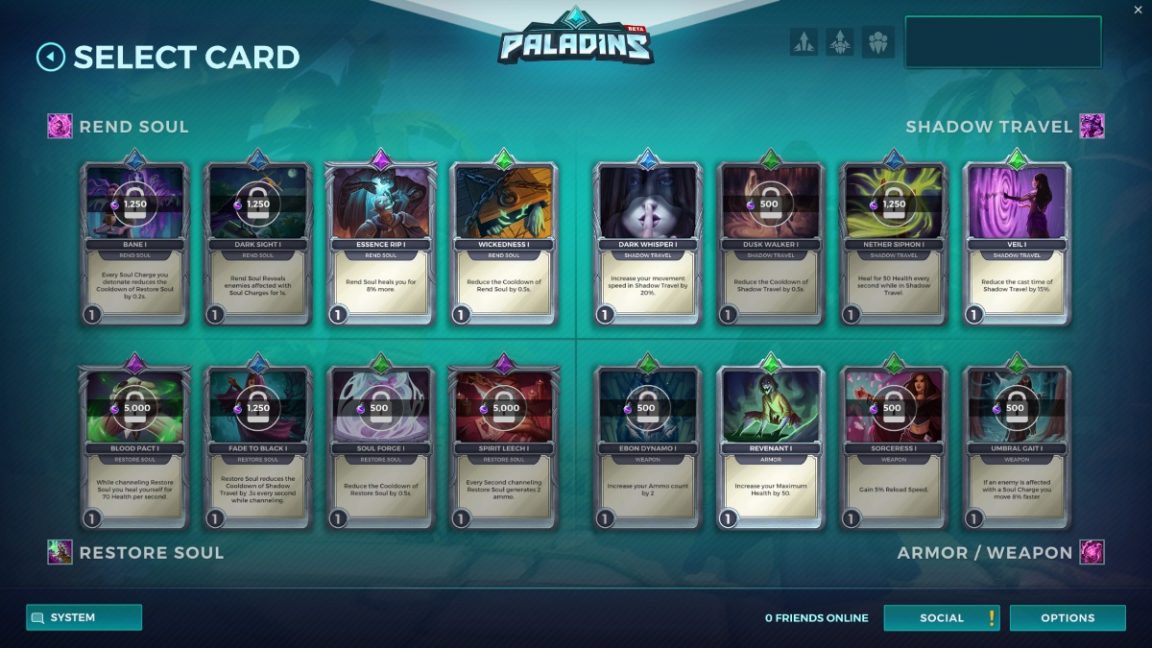 An integral part of Paladins and its progression system is the ability and the necessity to craft cards. All Champions have some of their cards locked, and you will need to craft them with a currency called Essence.

Essence is awarded for duplicate cards, completing the tutorial (36,000) or buying the Founder’s Pack (72,000). Your source of duplicate cards comes from from Radiant Chests and these can be purchased with real money, or with gold that you earn as you play.

Most cards are relatively cheap to craft (500 for the cheapest, 5000 Essence for the most expensive) while completing the tutorial alone allows you to fully unlock enough cards for a handful of Champions.

Unless you’re wishing to throw considerable money at Paladins in order to unlock Radiant Chests (and gamble on card acquisition), it’s much better value to simply buy the Founder’s Pack and then complete the tutorial. This gives a huge amount of free Essence and any subsequent cards you need, you can acquire by exchanging the gold you earn through play, into Radiant Chests.

I will forewarn that if unless you buy Radiant Chests and/or a Founder’s Pack, it will take you a considerable length of time to acquire enough gold in game, to unlock the majority of cards for all Champions. 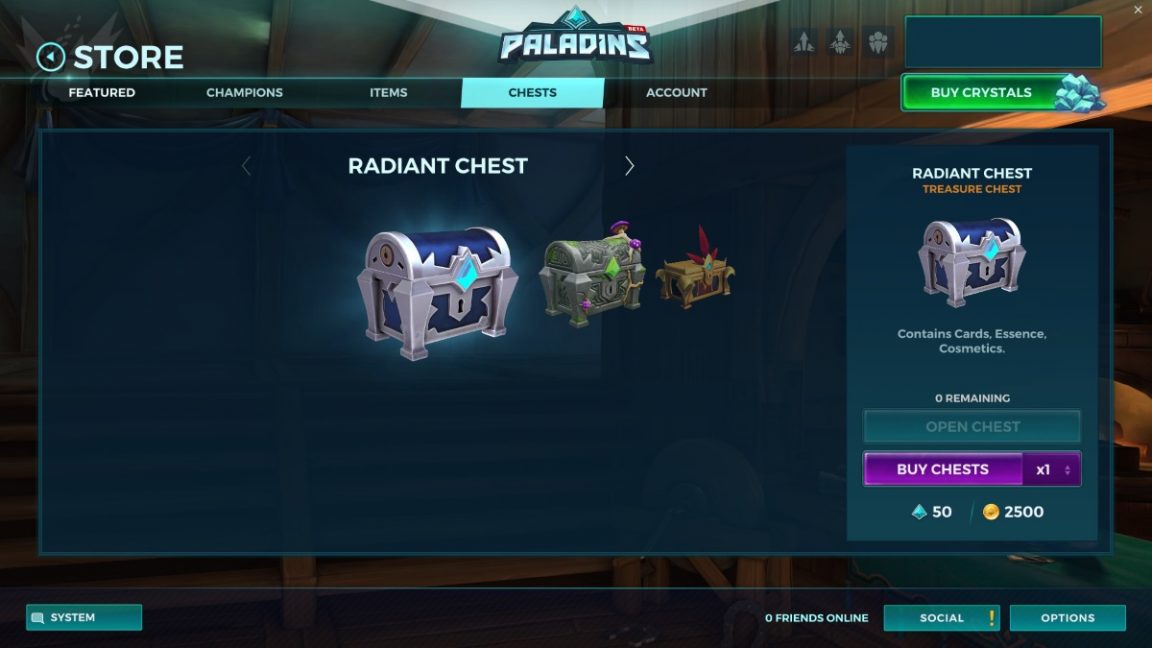 As a free to play game, the Paladins store offers a variety of services to allow you to part with your cash. You can buy:

Strictly speaking you don’t need to ever buy Chests, Boosts or Cosmetic Items, but there’s undoubtedly a gentle push towards all of them if you want an ideal play experience. New Champions cost 7500 gold, while the rest typically cost 5000 (or 200 Crystals).

For some perspective, it’s £3.99 for 200 Crystals which is enough to buy one Champion or 4 Radiant Chests. With the number of Champions available in the game right now, it doesn’t take a maths genius to release that purchasing each Champion individually would be pretty silly. Instead, it’s much more sensible to pick-up the Founder’s Pack and unlock them all instantly. You’re then free to spend any additional money on Radiant Chests or vanity.

As it stands however, the store is priced pretty fairly and if you are on a very limited budget, spending a small amount just to acquire a favorite Champion while using the free rotation can ensure Paladins is an incredibly cheap game to play. 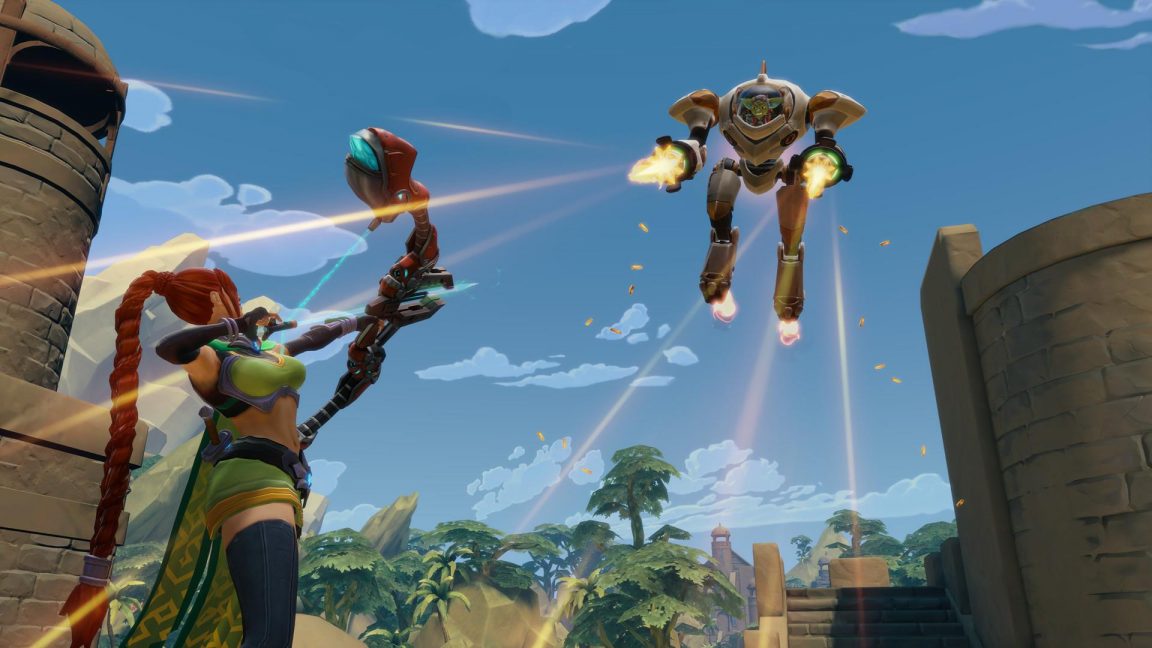 There’s a great deal of depth in Paladins when it comes to Champion synergy, drafting, customizing your Loadout and choosing the right Legendary card and items. It’s a game that’s easy to pick up and play, the fact it’s free removes all barrier to entry, queue times are near instant, and there’s also a solid Competitive mode once you’ve leveled enough Champions.

It’s absolutely worth picking up the Founder’s Pack if you find you love the game as there’s plenty of progression to be made.

Paladins: Champions of the Realm is available now on PC, PS4 and Xbox One