Head out to the desert and ride a seal. Why not? 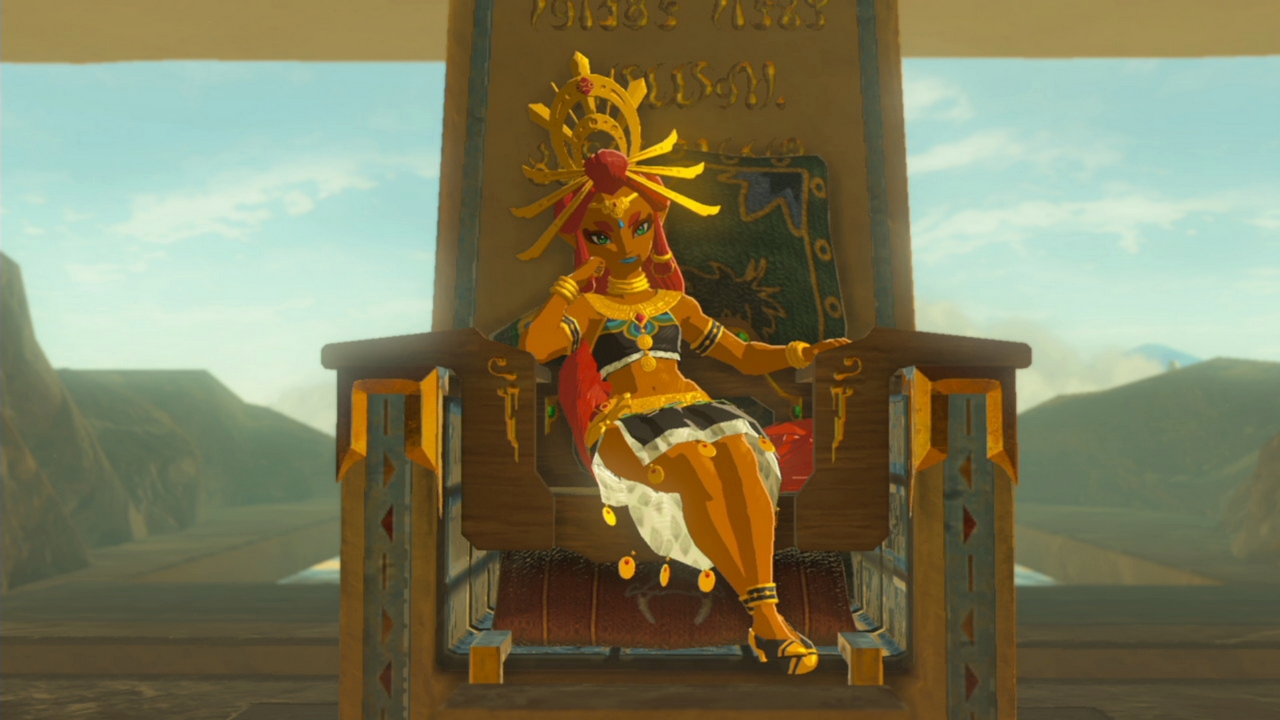 In order to get the quest to take down Divine Beast Vah Naboris underway, you’ll need to travel to the Gerudo Desert.

This is an obvious area of the map: it’s the flat wasteland in the far south-western reaches of Hyrule. There are two towers close by – the Wasteland Tower and the Gerudo Tower. The entrance to the Gerudo area is also home to the Gerudo Canyon Stable and the Kay Noh Shrine.

From here, walking south-west along the marked path will take you to Kara Kara Bazaar and then onward to Gerudo Town.

Getting Heat Resistance for the Gerudo Desert

It gets hot out in the desert, so you’ll want to cook or mix some stuff with the ‘Heat Resistance’ property. Don’t confuse this with flame-resistant (needed for Death Mountain) – this has an icon of a sun, rather than of fire or of a snowflake.

Look for ingredients such as the Cold Darner insect or the Cool Safflina plant in order to make Elixir and food that will protect you against heat. You won’t need too much, as pretty quickly here we’re going to get an outfit free of charge that’ll let us wander around the desert free of overheating problems.

Stop by Kara Kara Bazaar first for a cutscene, but head to Gerudo Town, the last stop on the road. The Daqo Chisay Shrine is here (providing a handy warp point), and you’ll find that men aren’t allowed in to Gerudo Town. Damn. This triggers a new quest. 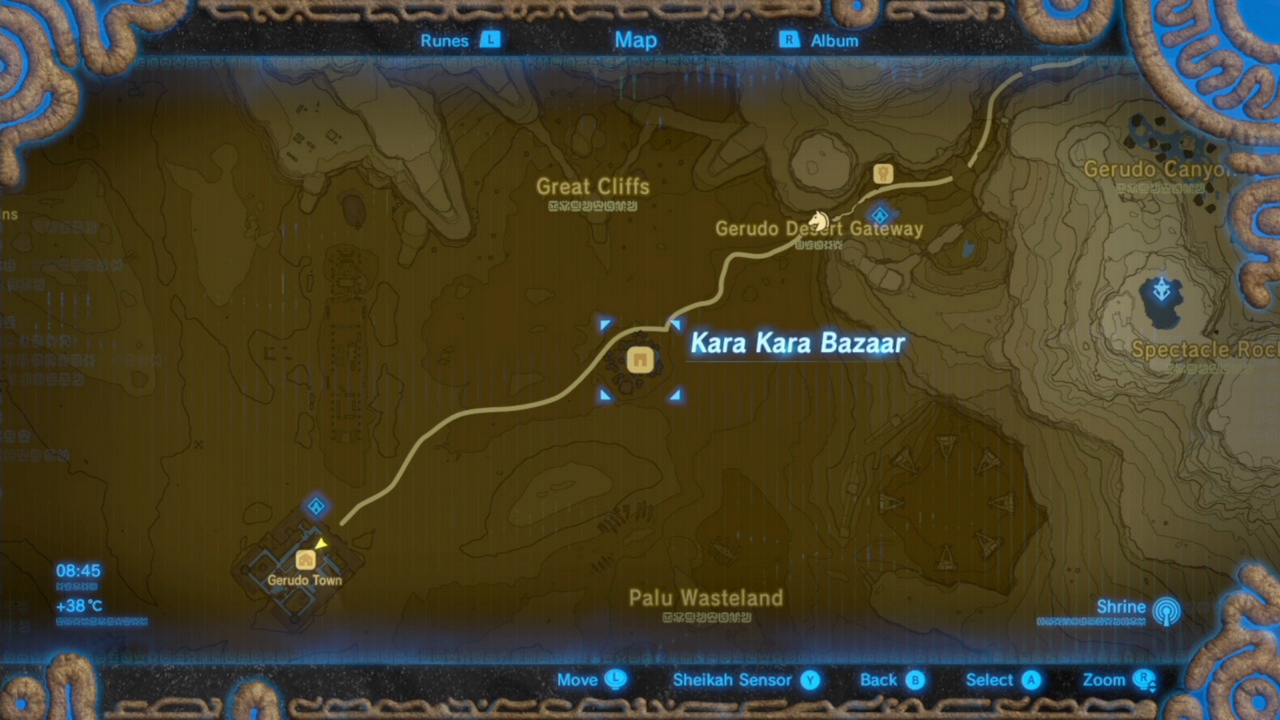 A man outside hints that another man has been getting in, and that they come from Kara Kara Bazaar. Head back to the bazaar and ask around the shopkeepers – they tell you that this suspicious person hangs out at the general store, the only building at the bazaar.

Head inside and ask inside the general store. If it’s the morning, they’ll point you to the roof of their store. Clamber up there and you’ll find the stranger. Compliment them on their appearance and they’ll happily give you a set of Gerudo Clothes.

These new clothes are found in the armor section of your inventory even though they provide little protection – gotta love that 1 armor stat! Dress up like a Gerudo and you can now get into town. Have an explore of the town, and when you’re ready head in to meet Riju, the leader of the Gerudo. After a chat with her, she’ll give you a task to complete.

A priceless heirloom of the Gerudo, one of the few things that can protect you from Vah Naboris’ ability to summon thunder strikes, has been stolen. We need to take it back.

Once Riju is done explaining, head in the direction she indicates (To Rija’s left) to find the guard barracks. Ignore most of the guards; you want Teake, the captain, at the top of the stairs. Talk to her and she’ll give the other soldiers permission to talk to you; now talk to them.

You learn that the thieves hideout is in Karusa Valley. Further, these thieves are the Yiga Clan – you’ve met these guys before, most likely. They’re awful.

Karusa Valley is outside of town, to the north. If you look at the map it’ll be very tempting to take a trip to a tower and glide over, but don’t – if you just head to the waypoint, you won’t find anything. Instead, you need to take the scenic route…

Leave Gerudo Town from the Northern exit, on the same side of town as the barracks. Chat to the guard at that exit, then head back inside. Right near this exit there’s a place that rents Sandseals. These creatures basically replace horses in the sandy areas, and it’s well worth getting used to it now ‘cos you’re going to use one in a high pressure situation shortly here.

Rent a sandseal and head in the direction indicated to you, into the sandy valley in the north. You’ll know you’re on the right path when you start seeing flags and bunting. 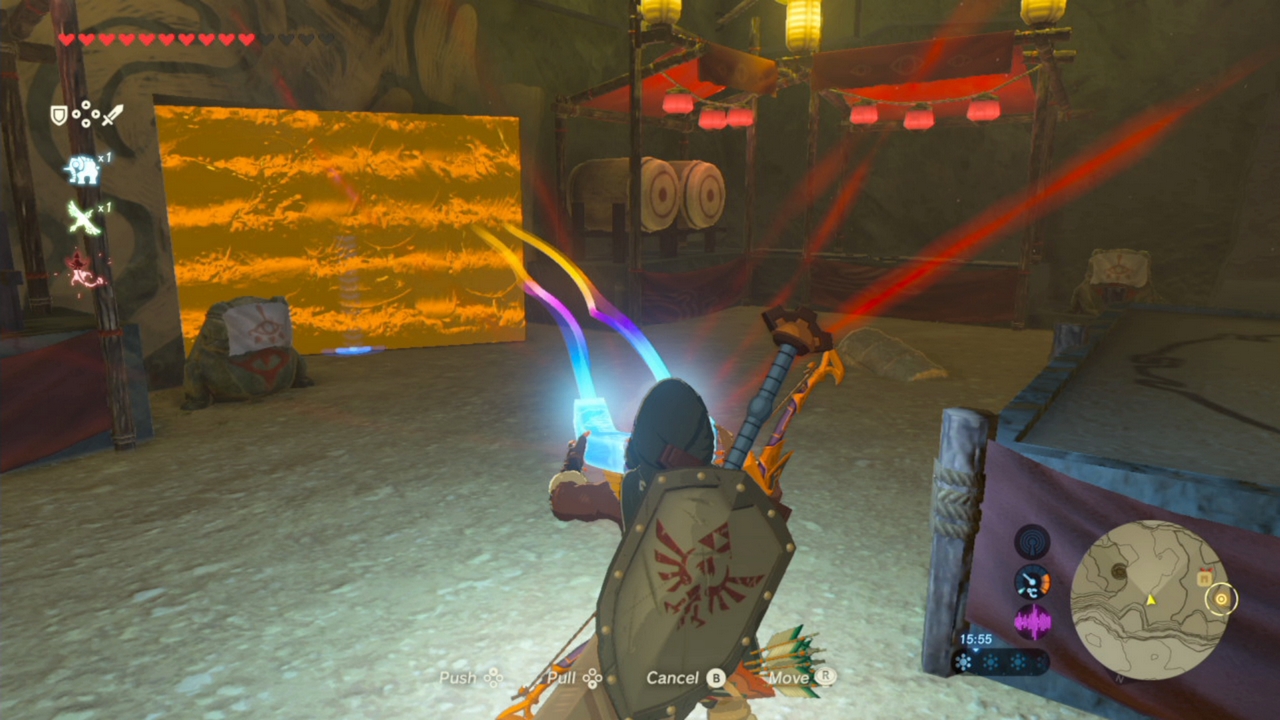 Inside the Yiga Clan Hideout

Eventually you’ll arrive at the Yiga lair. There’ll be fights along the way – nothing too difficult. I waited for the telltale red glow of their teleport and then smashed them with heavy swords.

When you get to a big circular room with banners and statues, your path forward is to burn the banners. Use a torch, fire arrows, flint – whatever suits you, just burn them all. One will reveal a path, but you should burn every single banner since some hide some lovely bonus chests.

Once through there, you’re inside the Yiga base. This is an optional stealth section. The Gerudo Prisoner, Barta, tells you that these guys love bananas.

The key to sneaking is to make use of that act. There are bananas on high ledges throughout the maze-like section. If you shoot the supports holding those ledges up they collapse, dropping bananas that will then distract the banana-loving heavies. Simply sneak on through the base.

When you get a chance to climb a ladder, do – there are a shed load of bananas up here, and these are actually fairly valuable since they boost your attack power when cooked.

It’s worth noting to that these guys are a bit stupid – if you let them spot you and then retreat before they enter ‘combat mode’ they’ll come investigate the situation, thus leaving their post.

Lastly, if you want, you can just fight them. The choice is yours, but be aware that they summon more goons and the guards themselves are pretty hard to begin with.

When you reach a room with a chest in the middle, pop open your magenesis rune and have a look around the room. There’s a hidden door in the right hand wall, but there are also some chests half buried in the sand. Drag them up if you want, then open the door and head through. 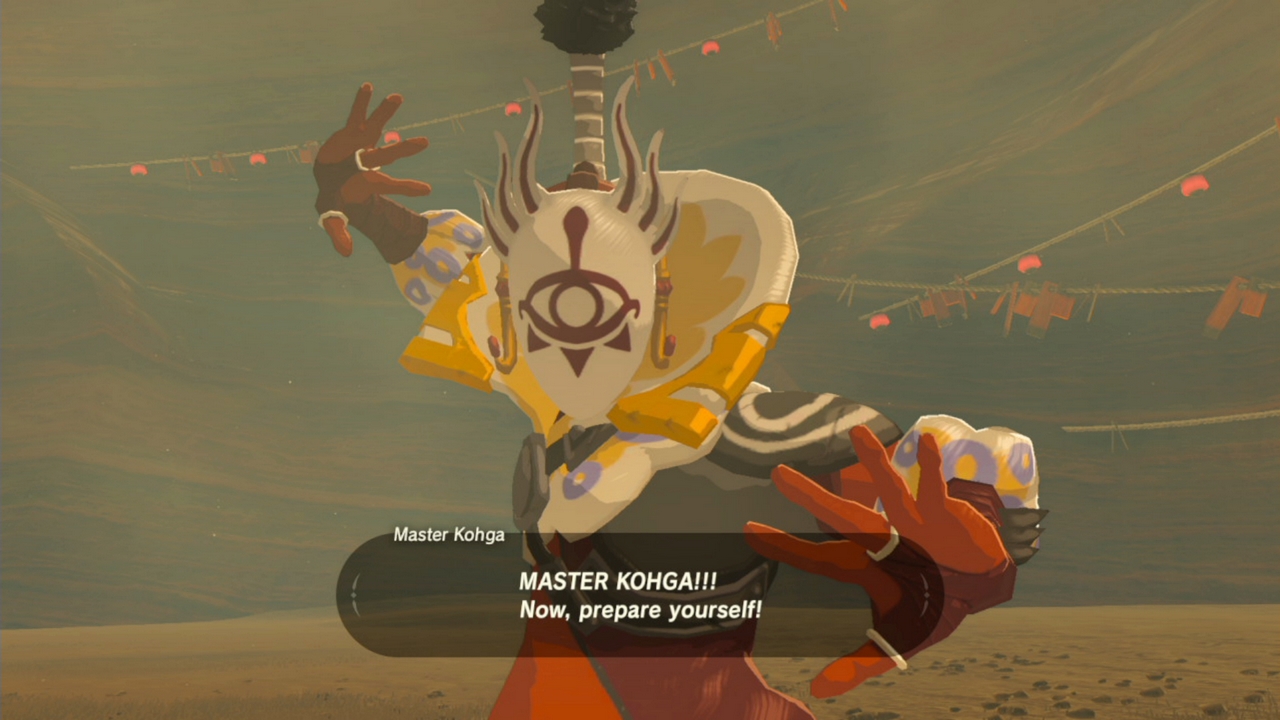 Master Kohga of the Yiga Clan is actually quite glad to see you – but he won’t be. He’s a bit dumb, unfortunately.

You know how those chests throughout the Yiga Clan Hideout kept giving you arrows? Well, consider that a clue. Prepare two things: Your bow and a nice high powered melee weapon.

In phase one of the fight, Kohga will summon a ball above his head and throw it at you. Before he can do this, pop him with an arrow while he’s summoning the ball. It’ll drop onto his head and leave him vulnerable – now run in and deal massive damage. Repeat this as necessary.

In phase two, Kohga will move to hover above the pit and do the same with two balls that actually move. The principle is the same: you want to force him to drop one of the balls on his head. Shoot at the right time.

The third phase is where Kohga will try to catch you off guard – it seems that he too has the power of magnesis, and he tries to use it to summon a great big metal ball and smash it into you. Make this a magnesis war – take your own magnet out and use it to wrest control off him. Finally, smash him with his own spiked iron ball. Ouch.

With that done, retrieve Rija’s previous headgear. It’s time to head back… and time to take on Naboris. How, exactly, do you board a giant camel?