Remember: it’s not a racing game. 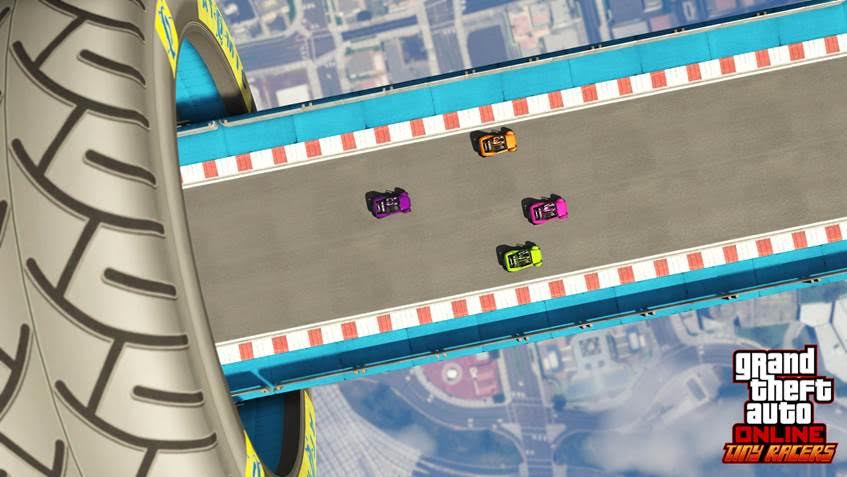 New GTA mode Tiny Racers went live on Tuesday and the reviews were in just a few hours later.

You know how opinions are on the internet – something is either showered with love or targeted with some sort of hate-nuke. In this case, the internet reacted with the giddy abandon of Kim Jong-Un and his button-pressing finger. Check out this review:

Because your first five minutes with Tiny Racers are awful. What it looks like is a Micro Machines-style racer, with cute cars squeaking their way around tight tracks, dropping bombs and nudging rivals over the edge. It’s cute! It’s looks like fun!

The misconception is that it’s all about racing. It’s not, and to Rockstar’s credit it’s labelled as an Adversary mode. There’s cool cars and stunt tracks with jumps and chicanes but it’s not a racer at all. It’s all about aggro.

“The misconception is that it’s all about racing. It’s not. There’s cool cars and stunt tracks with jumps and chicanes but it’s not a racer at all. It’s all about aggro.”

With only four players, the first thing that happens is at least two racers will try to nudge each other straight off the bat. This will end with at least one car spinning out and getting left behind. Get left behind from the lead car and you have 10 seconds to catch up or explode. You cannot catch up. You will explode.

If you lose any speed at any point during these altercations you will be left behind and almost certainly blow up. There is no opportunity to catch up. There’s no boost, no one-shot nitro. There’s a pad that your car will race over which flings you forward, but it stretches the width of the track and everyone in front of you has already hit it. As much as you speed up it’s just an illusion because if everyone gets a speed boost, no one’s at an advantage.

There are power-ups. A bomb you can drop behind is handy, the rockets which can be fired forward or backwards are also useful. The poof of smoke that turns you into another car? Not so much. The machine gun tickles when it hits. The reverse controls? Welcome to hell. 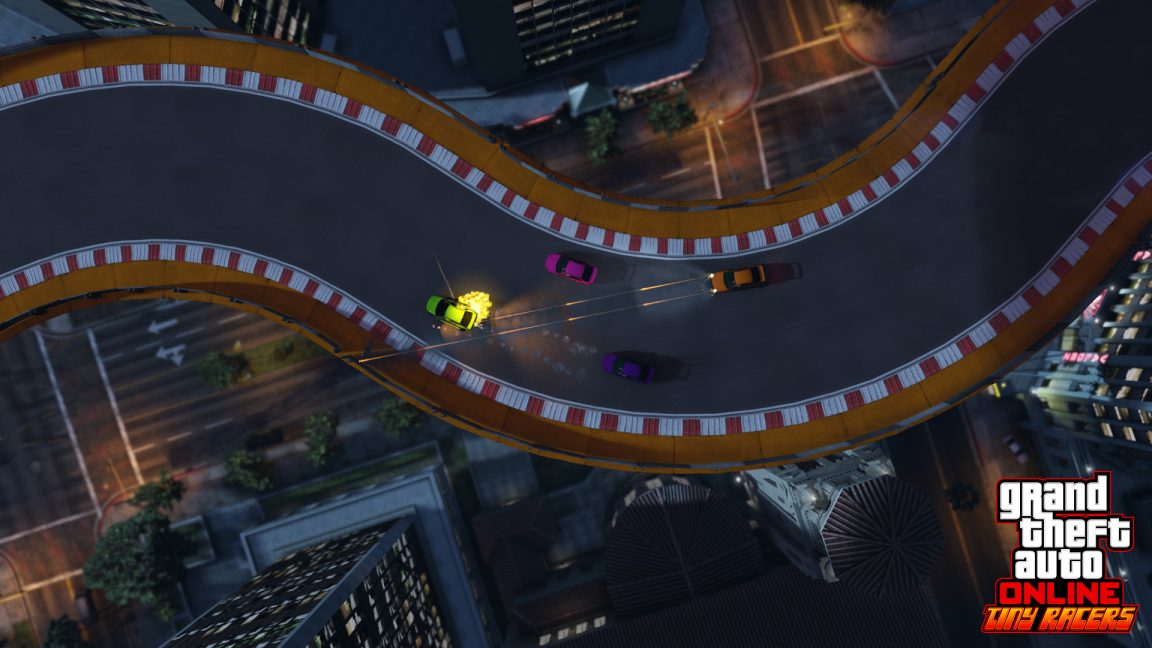 It also suffers from the long load times that curse everything in GTA Online. Adversary modes in GTA Online are designed to only take minutes, but you don’t want to be waiting in the lobby for longer than you play.

I swing violently between loving and hating Tiny Racers, usually dependent on whether I’m winning or not. Once you’re away from the start line and battling it out, with the split-second risk of grabbing power-ups or sticking to the racing line, it’s a thrill. I don’t mind the competitive nudging once we’re all up to speed, either. Clipping the back end of a rival and spinning out is fair game and has always been a part of GTA’s racing.

“Ninety percent of the time, three cars will drive themselves into a clusterfuck while the fourth sprints away to victory.”

But it’s equally frustrating when some asshole rams you before you’ve even got up to speed and three of you just gently push each other around and blow up ten seconds later. There’s no drama in that. There is drama in the final two racers alive trying to nudge and overtake for that slight advantage, but you have to get through the chaotic few seconds at the start line first. Ninety percent of the time, three cars will drive themselves into a clusterfuck while the fourth sprints away to victory. Repeat.

And so as much as it feels tight to complain about something we’re given for free, Tiny Racers seems like it will become another one of those Adversary modes that drifts into the rear view mirror once the lure of double RP and cash is done. I mean, when was the last time you played Rhino Hunt? That is unless of course internet opinion swings furiously in the opposite direction six months down the line. Which, knowing the fickle nature of video game consensus, is actually quite likely.