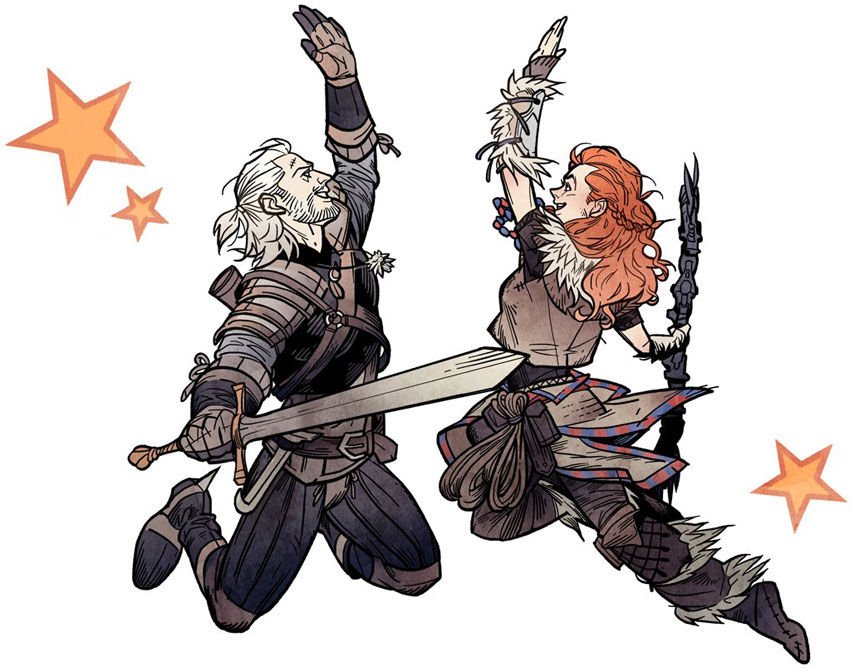 Remember just after Horizon Zero Dawn released, The Witcher 3: Wild Hunt developer CD Projekt RED sent out a cute congratulatory image? And then Guerrilla Games replied in turn, and it was all just sickeningly sweet and made us feel almost resigned to the modern horror that is brandter.

Just to make it all even more adorable, the two studios are at it again, handing out congratulations not to each other this time but to some excellent cosplay efforts.

CD Projekt RED kicked it off by sharing this image of lynnjisr and vegacosplay recreating Guerrilla’s Horizon Zero Dawn and The Witcher 3 crossover fan art.

This is EPIC @Guerrilla!

Both Guerrilla Games and CD Projekt RED responded with enthusiasm to this second piece of evidence of the cosplayers’ efforts, sharing the tweet with Horizon Zero Dawn and Witcher 3 fans.

So, this is a thing now?! We love it! https://t.co/DapcLjMfAk

Horizon Zero Dawn owes a great deal to The Witcher 3: Wild Hunt, as do so many games of this generation. This isn’t something we’re complaining about, any more than we complained when Skyrim made big budget RPGs a thing again.

Have you finished both games? (This seems a good opportunity to plug our Horizon Zero Dawn guide and The Witcher 3 walkthrough.) If not, and if you have a long weekend coming up, it’s probably time to plan out your assault on that backlog.

We do not expect the next few months and years to bring fewer hundred hour adventures. Get cracking before you miss these treasures in the flood of new experiences.