Xbox Insiders have a lot to look forward to in the coming weeks. 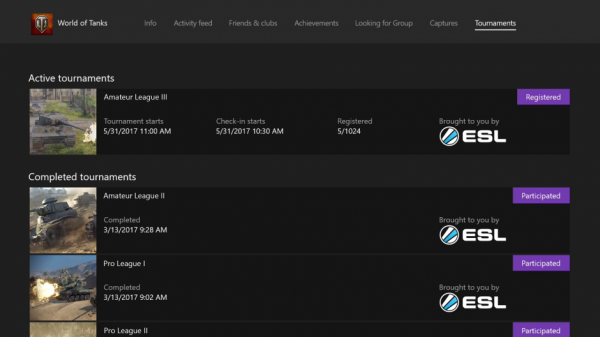 Microsoft has outlined another batch of new features that will be rolling out very soon to Xbox Insiders. Some of the features are new, while others expand on what’s already available based on feedback.

Arena, the tournament feature that allows the community to run and manage competitions from the console, will see its first tournament. It’s a World of Tanks tournament, organised by ESL. The Arena app allows anyone to follow and participate in similar events, and includes results reporting and direct access to matches.

Custom gameerpics are also coming, and you’ll be able to update yours from Xbox One, Windows 10 PC, or any phone. Microsoft said this feature will take longer to come out to the public to ensure it’s working as intended.

Other profile additions include the ability to watch a player’s livestream straight from their profile. Every player’s profile will now also display their Arena tournament history and upcoming tournaments.

The Activity Feed is getting some updates, too that allow you to pin favourites or hide unwanted posts. My Games and Apps, the ever-evolving part of the UI, will now support filters to help you separate Xbox One from Xbox 360 games.

The Settings section will get get another streamer-friendly feature. If you have Kinect, and you’re streaming through Beam or Twitch, the camera will automatically zoom to your face.

On the Xbox App on Windows 10, you’ll be able to select audio input and output in party chat. Clubs and Looking for Group will see a number of changes, too, and you can find out more about these in the link above.

All of these updates will roll to select Xbox Insiders first in the next few weeks.