Mass Effect: Andromeda imagines a world in which the success of SpaceX drove investment in space exploration. 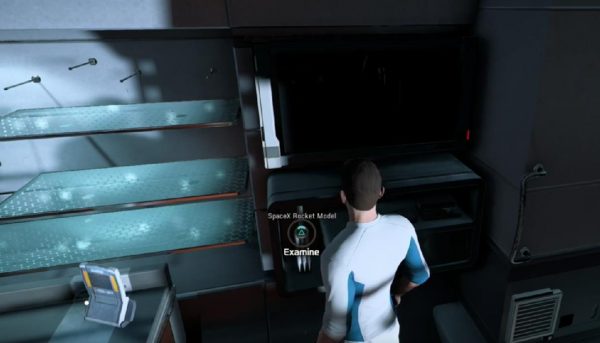 Spotted by Polygon, the reference is in the form of a Falcon Heavy model you see in Ryder’s private quarters. When you approach the model and interact with it, a new entry gets added to the in-game Codex.

The entry includes a bit of real history, mixed in with fake history from a possible future. Here’s what the Codex says:

“After the historic NASA Apollo moon landings in 1969, the drive for crewed space exploration slowed as government funding dried up. The move towards cheaper unmanned probes and orbital stations gained traction instead, as one of the central obstacles was the expense of creating first-stage booster rockets that would be lost after each flight.

“But the lure of sending people into the cosmos never lost its draw. In the early 21st century, a private company called SpaceX pioneered efforts in sustainable space travel by developing a reusable launch system. It revolutionised the field as the first entity, government or private, to successfully launch and then safely recover an orbital booster rocket intact, allowing it to be reused in future launches. Reusable hardware placed lower-cost, sustainable space travel within reach.

You can see the model for yourself if you’re an EA or Origin Access subscriber. If not, the game launches on March 21 on PC, PS4, and Xbox One.