The Legend of Zelda: Breath of the Wild has an NPC who looks rather familiar.

In the video above from YouTube contributor Sean Buckley (Seaniccus), you get a look at Botrick, a watchman who patrols the area around Outskirt Stable in The Legend of Zelda: Breath of the Wild.

As Seaniccus points out, he bears a “striking resemblance” to Nintendo president Satoru Iwata, who sadly passed away in July 2015.

Running into the character just outside the starting area of the game, you’ll find he is a kind character who warns Link of the various dangers within the Hyrule Wilderness. Chatting with him a bit more, he will tell the player about Satori Mountain and the Lord of the Mountain (thanks, Nintendo Life). 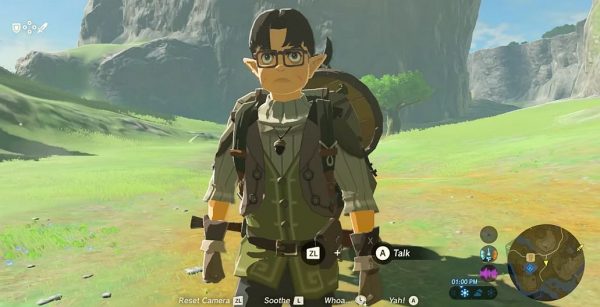 There isn’t a quest associated with the peak of the mountain, but there is a serene pond with lovely cherry trees in full bloom which can be enjoyed. That said, there are a few mysteries to discover there, one of which is one of the more magical mysteries in the game. Don’t worry: Seaniccus doesn’t spoil that for you in the video.

If Botrick is indeed a tribute to Iwata, it is a very touching one which shows how much he meant to the development team, and everyone at Nintendo. Since the company hasn’t released a statement on the matter, we’re not 100% on whether he is a tribute or not, but our gut tells us this is indeed the case.

Give the video a watch and prepare for the possibility of getting choked up a bit.