Blizzard has announced the new Overwatch hero and the Guardian Robot named Orisa is playable from today on the PTR.

Orisa is a Guardian Robot in Overwatch hailing from Numbani and was built from parts pulled off one of the “short-lived OR15 defense robots.”

These parts were purchased by Efi Oladele, who spent the bulk of her grant money to acquire one of the decommissioned OR15 bots.

As previously reported, she believed that Numbani needed a protector. She felt an upgraded OR15 was just the thing, apparently. So, she repaired and “reconfigured the robot” with a personality core.

Orisa is a Tank with two star difficulty rating and according to the developer update, she has the further firing range of any other tank in the game.

She can use a protective barrier in order to protect teammates. Think of it along the lines of Reinhardt’s barrier shield and it’s about half in size and shape as Winston’s barrier bubble. It will project anywhere she targets it, which means she can also protect herself along with allies. It will take the usual amount of damage other barriers take in the game, and Symmetra’s Ultimate Fire can go through the barrier, so feel free to shoot it up.

Her Supercharger Ultimate is an item she can throw on the ground which looks like a drum of sorts. Osira pulls it off her back, tosses it down, and it will boost the damage output of multiple teammates in line of sight. The enemy can destroy the Supercharger so it’s best to protect it with the barrier or out it out of the enemy’s line of sight – but still in the team’s line of sight.

Along with the ability to fortify her defenses and deploy the Supercharger, she can also “launch graviton charges to slow and move enemies using the ability Halt.

You can get a look at all of her abilities in action as well as her skins through the link. 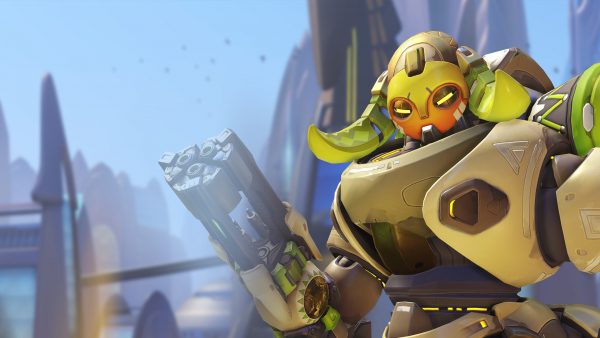 “Built from parts of one of Numbani’s short-lived OR15 defense robots, Orisa is the city’s newest protector, though she still has much to learn.

“Originally put into service before the Omnic Crisis, the OR14 “Idina” line of security robots was built in Nigeria’s massive manufacturing omnium. After the war, they were taken out of production, along with many of the other models used during the crisis. Twenty years later, Numbani revived and recommissioned the OR14 program to protect the city from external threats. These new OR15s were deployed for a short time before they were destroyed in an attack by Doomfist.

“Following the attack, the program was scrapped, and the civic government sold off the remaining OR15 inventory. Some parts were purchased by eleven-year-old Efi Oladele, a brilliant girl whose early accomplishments in robotics and artificial intelligence had already earned her the Adawe Foundation’s “genius grant.”

“With the approval of her understanding and open-minded parents, Efi spent the bulk of her grant money to acquire one of the decommissioned OR15 bots. She believed that Numbani needed a protector and that an upgraded OR15 could do just that. Efi repaired and reconfigured the robot and installed a personality core that she had designed herself.
She named Numbani’s newest hero Orisa.

“Orisa has shown that she can be of service to the city, but she is still working toward finding her optimal protocols. The omnic’s inexperience can cause her to be an occasional liability. Fortunately, between Efi’s willingness to make the necessary modifications and Orisa’s adaptive artificial intelligence, both robot and creator have always been able to set things right.

“As Orisa starts her career as a guardian, she has much to learn about the world and her functionality. But as long as she is guided by Efi’s boundless optimism and her own growing sense of honor and duty, Orisa stands ready to protect Numbani and her creator at any cost.”

We’ll have more on the new hero shortly.