With Horizon: Zero Dawn having gone gold, it’s time to have another look at some of the creatures Aloy, voiced by Ashly Burch, will be up against in the game. 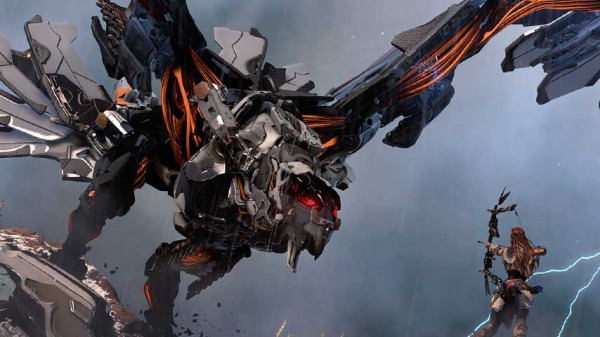 Earlier this week, we were given a look at Thunderjaw and Snapmaw, which seem to be mechanical versions of the Tyrannosaurus and Brachiosaurus, respectively, in Horizon: Zero Dawn.

Stormbird is a massive bird of prey which resembles the extinct Haast’s Eagle, only much, much larger as the New Zealand bird only weighed around 35 pounds at most. It is a melee fighter, and along with being able to swoop down and attack the player, it can also fight on land. Here, it will use powerful attacks such as wing blasts and claw slashes.

Its wings can also collect electricity from the air and discharge it.

The Behemoth is a huge, rugged transport-class machine that resembles a Crichtonsaurus, to me at least. This machine uses anti-gravity technology to “transfer precious cargo from smaller acquisition-class machines into its stomach container.”

If the player provokes it, the Behemoth can either charge them or use its anti-gravity unit to hurl large objects. It also sports large grinding drills which can be used to propel rocks.

Like all creatures in the game, each have vulnerabilities the player will need to take advantage of, otherwise, how else would a bow take down a creature not made of flesh? Granted, Aloy makes use of armor-piercing, electric, and explosive arrows, so that will help matters.

And just think of all the lovely images you’ll be able to take of these creatures, thanks to the game’s Photomode.