For Honor will almost certainly have paid DLC characters, just like we expected. 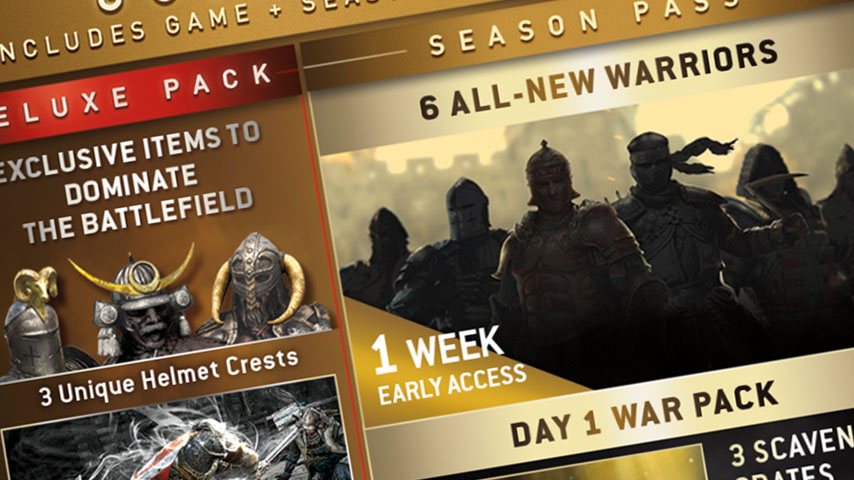 For Honor will be available in Deluxe and Gold editions, in the finest Ubisoft traditions of giving you multiple different opportunities to fork over extra cash for goodies.

The Gold Edition of For Honor apparently includes everything in the Deluxe package along with the Season Pass. We say “apparently” because Ubisoft took the information down from its website shortly after people started talking about them. Gamestop’s For Honor Season Pass listing is likewise totally uninformative.

So nothing is confirmed and may be subject to change, but assuming the details Ubisoft posted originally were largely correct, we now know how Ubisoft intends to make money from the game pot launch even though all For Honor maps and modes will be free: premium characters.

According to screengrabs of Ubisoft’s listing before it was altered, captured by redditor Malevolent_Platypus, the Season Pass includes one week early access to six new warriors, early access to all other new content (presumably maps and modes), an exclusive “sunbeam” emote for all warriors, three scavenger crates, an exclusive emblem and 30 days of Champion status, whatever that means.

Be sure to click the gallery through to the second image, which clearly breaks down what’s (probably) in the base For Honor package as opposed to the Deluxe and Gold versions.

We don’t know the full details of the Scavenger crate system but it seems likely to tie into the gear and customisation system. For Honor has an in-game currency called Steel so you can grind for this stuff if you don’t want to pony up and take a shortcut.