Nintendo’s first proper mobile outing of its kind seems like a winner.

It still doesn’t feel real. For the past two days I’ve had a Super Mario Bros. game on my iPad. It’s real. Nintendo has finally capitulated and done it.

Let’s get the obvious out of the way: this game is essentially a runner. It’s ‘the Mario game that you can play with one hand’ as Nintendo has repeatedly boasted, and that simplicity ultimately works in its favor as a bite-sized phone or tablet style game. This is Nintendo, though, and so this isn’t just any old endless runner – small twists to the formula ensure that it’s a different experience and one that feels suitably Mario.

Take the running speed, for instance. When I think of Runner games the major examples I think of such as Canabalt or Jetpack Joyride use speed as both an incentive and an enemy – you want to go as quickly as possible but also the faster you go the harder the game becomes. Mario isn’t Sonic, though – so he runs at normal Mario speed.

The main levels aren’t endless either, with Super Mario Run featuring a fairly typical Mario structure of worlds that contain a number of levels topped off with an enemy base style level such as a castle or an airship. In a sense this part of the game is finite, but there’s multiple challenges per level and coin high-score challenges all designed to get you to replay over and over again.

This basic structure of a runner starts out simply but is quickly built upon. There are all-new level features such as a stop block that makes Mario pause in front of a fork in the road or a difficult set of jumps so you have a moment to contemplate the level layout, a boost jump block that forces a 3D Mario style long-jump and blocks that flip you back a certain distance.

“Rather than try to just cram the existing Mario experience down into a mobile format, Nintendo has wisely built a game that is mobile first.”

Traditional Mario mechanics are slowly layered on alongside all of that. Gigantic springs that launch you, overhead monkey bars to clamber on, and a slew of classic Mario enemies that provide important obstacles throughout levels. All of the artistic aesthetic of the game from visuals through to music is borrowed from the New Super Mario Bros. games, and these assets looks a damn sight better on these screens than they do on the 3DS.

All of this is, unsurprisingly, smart. Rather than just cram the existing Mario experience down into a mobile format, Nintendo has wisely built a game that is mobile first. The game begins that way: with the most simple of concepts, automatic running and tap-to-jump. The game never moves away from this concept, but it quickly begins to iterate by finding and adding the elements of the traditional Mario gameplay that best fit mobile to go along with those foundations. This game isn’t going to replace Super Mario 3D World or New Super Mario Bros. but that’s also not the point: it’s a more simple game designed to be played on the go in short bursts.

The traditional Mario levels make up the World Tour side of the game but there’s also Toad Rally, a secondary heading that basically turns levels into time-limited endless runners. You can loop the level as many times as you like within the time limit, the aim to collect as many coins as possible in your loop to beat a pre-selected opponent. Beating that opponent will net you fans in the form of a bunch of toads, and these little guys have an impact on another periphery feature – more on that in a mo. 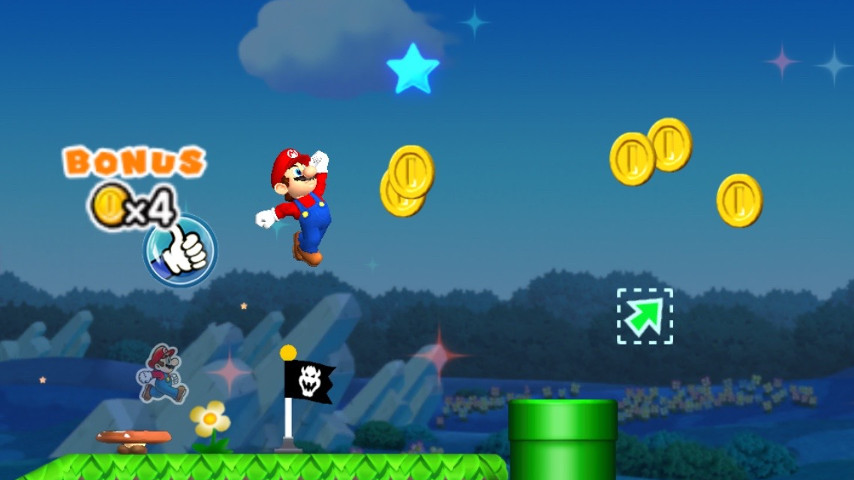 The most important thing about all this is that these levels are just good fun. Already in these first few days I’ve found myself playing not just for progression into the ‘story’ levels but also in Toad Rally; it’s exciting to compare your skills against other players and the simple, snappy nature of that particular mode makes it easy to drop in, attempt a couple of runs and then drop right out. You do need tickets to play Toad Rally, but they honestly don’t seem very scarce, with mini-games offering them up regularly.

All of this would actually be enough for me, but Super Mario Run also packs in one more mode for good measure. The Kingdom Builder mini-game is actually the very first screen the game puts you in when you load it beyond the first boot, and it’s essentially a little light-touch Mario take on the kingdom management games that are so popular on mobile. From above your Kingdom looks like a classic SMB3/SMW era Mario map – except one you can customize in both look and utility.

“As one might expect from Nintendo, there is a care, quality and polish here that is immediately apparent from the moment you boot the game.”

As your kingdom grows you can unlock buildings, items and the like. Some of these are cosmetic but others are special, such as Toad Houses that in a Mario 3 fashion give you access to bonus mini-games, houses that unlock additional characters from Luigi on and even warp pipes that appear to unlock all-new courses.

Your kingdom is grown by getting toads, which as mentioned earlier is governed by your performance in Toad Rally. Toad Rally requires tickets, which in turn are earned by playing, completing challenges and posting high scores in the regular World Tour mode. I’m at my earliest days with the game, but it all seems like it’ll become decently cyclical, one feature driving you to invest more time in another.

The free trial of the game will give you access to the first three levels of World 1 and the first basic Rally and Building features. I’m already quite convinced of Super Mario Run’s quality, though, and it doesn’t feel like its $10 price – a premium on iOS and mobile – is particularly scathing.

My only major complaint is the online-only requirement, but I also get it. I understand. I don’t think this aggressive solution is the permanent anti-piracy solution, however.

As one might expect from Nintendo, there is a care, quality and polish here that is immediately apparent from the moment you boot the game. I’ve still got a lot left to play, but my first impressions are overwhelmingly positive – so long as you understand going in that this is a runner and not a full-on Mario experience, you’re likely going to walk away happy.