The king of FPS has faced very stiff competition this year. Is it time to retreat or reboot? 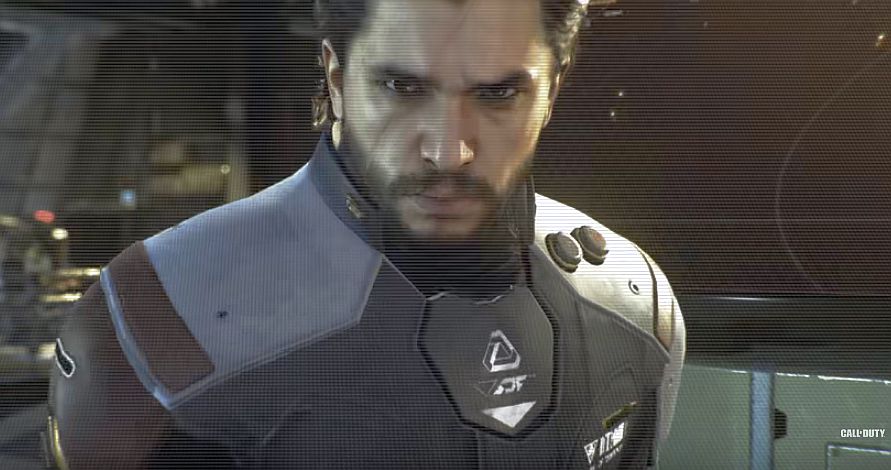 “There’s a mainstream appeal to Call of Duty that makes it untouchable, with a praetorian guard of fans circling like rage-drunk vultures, ready to protect the series against attack.”

Call of Duty isn’t dead, but it might be bleeding out. 2016 has been a massive year for first-person shooters that reinvigorate the genre; Overwatch flashed its technicolour, hero-based panties, Titanfall 2 hit a beautiful free-running sweet spot and Battlefield set its sights on bringing back old-school war. And then there’s Call of Duty.

If Modern Warfare Remastered has taught us anything (besides the fact that Captain Price is, was and will always be a grade-A hero) it’s that the series that changed and dominated the gaming landscape just isn’t keeping up with its FPS counterparts.

Although no-one’s yet compared the latest instalment unfavourably to the blandly familiar Ghosts, it’s no secret that Infinite Warfare hasn’t been welcomed into the COD fold, starting with the cry of “WTF? We said no more future BS” and the subsequent downvoting of the trailer on YouTube. 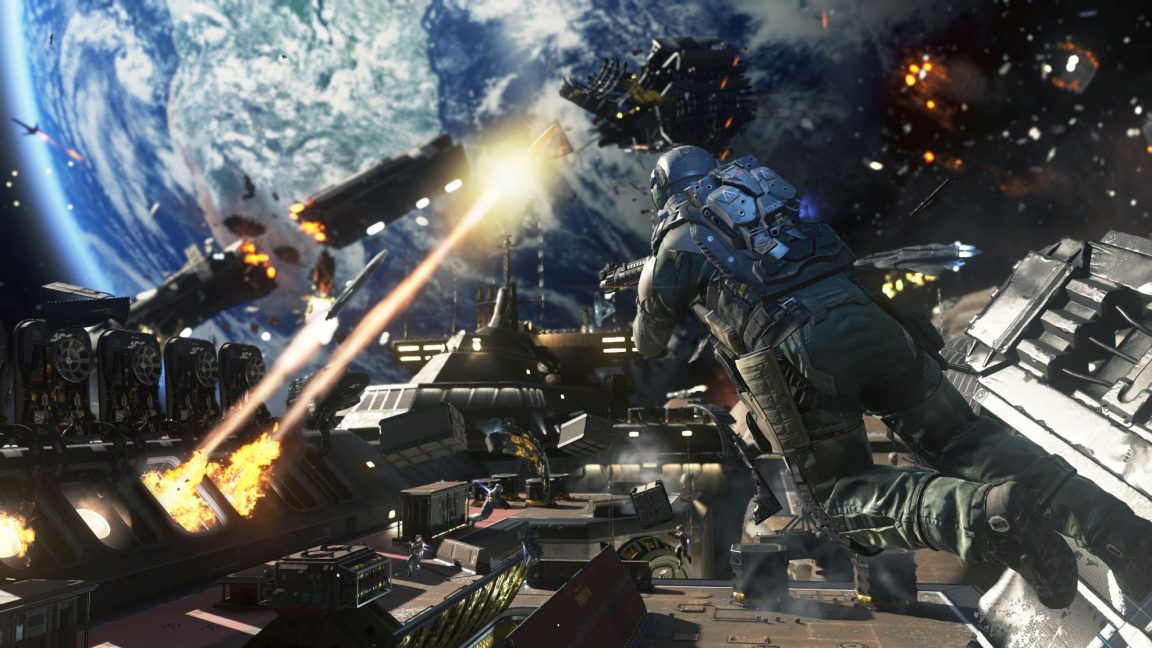 But it’s just not enough to say “We hate future COD” since the millions of sales show that’s just not true. Infinite Warfare easily out-sold not just its main FPS rivals, but pretty much every other triple-A game it faced off against. Dishonored 2, Watch Dogs 2… It left them all for dust, beating the combined sales of Battlefield 1 and Titanfall 2 and leeching to the chart’s number one spot for three weeks despite selling 50 percent fewer units than Black Ops III.

That’s because Call of Duty is almost unique as a game, and certainly unique in its genre. Like Pacman and Pong, it’s a cultural phenomenon that even your grandmother, who struggles to work an iPad, has heard of. And it should surprise precisely no-one that Infinite Warfare battled for the top spot against FIFA 17. There’s a mainstream appeal to the games that stretches well beyond the sort of wise and beautiful gamers who pore over articles assessing COD’s direction and downfall. It’s untouchable, with a praetorian guard of fans circling like rage-drunk vultures, ready to protect the series against attack.

Who’s even buying these games? They shouldn’t be dismissed as sheep, and probably you can siphon them off into three primary groups. There’s the professional hardcore, who buy COD every year and whose K/D ratios incite jealousy and anger. The far bigger crowd is the casual gamer, who picks up the game for the same reason they’ll buy tickets to a sub-par Steven Spielberg movie: It’s still a mark of quality. Hell, even a weak Call of Duty is more refined than 99 percent of other shooters out there.

And the rest of us? Well, it’s like Stockholm Syndrome, it’s instinct, a bad habit we can’t break because we hope, each year, that this time it’ll be different; this year Call of Duty will hit the highs of the past. 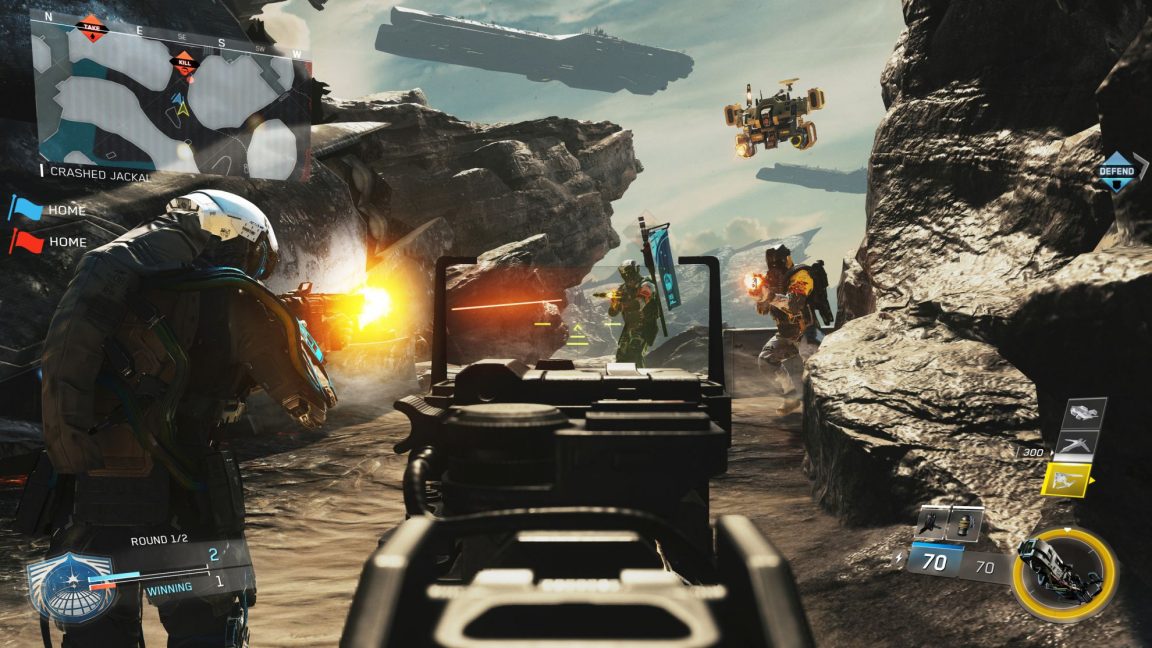 “It’s pretty difficult to picture a gaming landscape where Titanfall would exist without Call of Duty. But we’re living in a world where Call of Duty is now aping its opponent.”

Call of Duty did everything right to begin with. Start out with a frantic yet cerebral, multi-protagonist World War Two jaunt, before bringing the action bang up to date. Modern Warfare was a literal game-changer that stole inspiration from MMOs and introduced persistent XP to the realms of a refined shooter experience that kept us playing over long periods of time; it also introduced the phrase “just one more game…” (a loose English translation of the phrase “I’ll be here a while”) to an even wider audience.

It was a no-brainer that rivals were going to sit up and notice. Developer Infinity Ward had perfectly balanced gameplay between effort and reward, creating an addictive multiplayer that delivered in-game perks and an on-going reason to play that, handily, raked in a mega-ton of dollars.

Call of Duty found a print-money licence in 2007; they’re still using it 11 years on. And that’s a problem.

FPS’s have come a long way. Since Modern Warfare, we’ve had games like Left 4 Dead 2, Halo 4 and Battlefield 3 each bring their own ideas to the genre’s table. They’ve learnt well from the granddaddy, building on the yardsticks COD laid down to offer new experiences, whether it’s L4D2’s arcade competitive co-op; Battlefield’s epic level design; characters that make an impact in a story that resonates in Halo (name me one character from Advanced Warfare that isn’t Kevin Spacey, because I sure as hell can’t remember). Even Destiny owes a debt to Call of Duty. OK, shooter mechanics are pretty much the same as since forever – left trigger aim, right trigger shoot – but Bungie are killing it because they evolved the system. 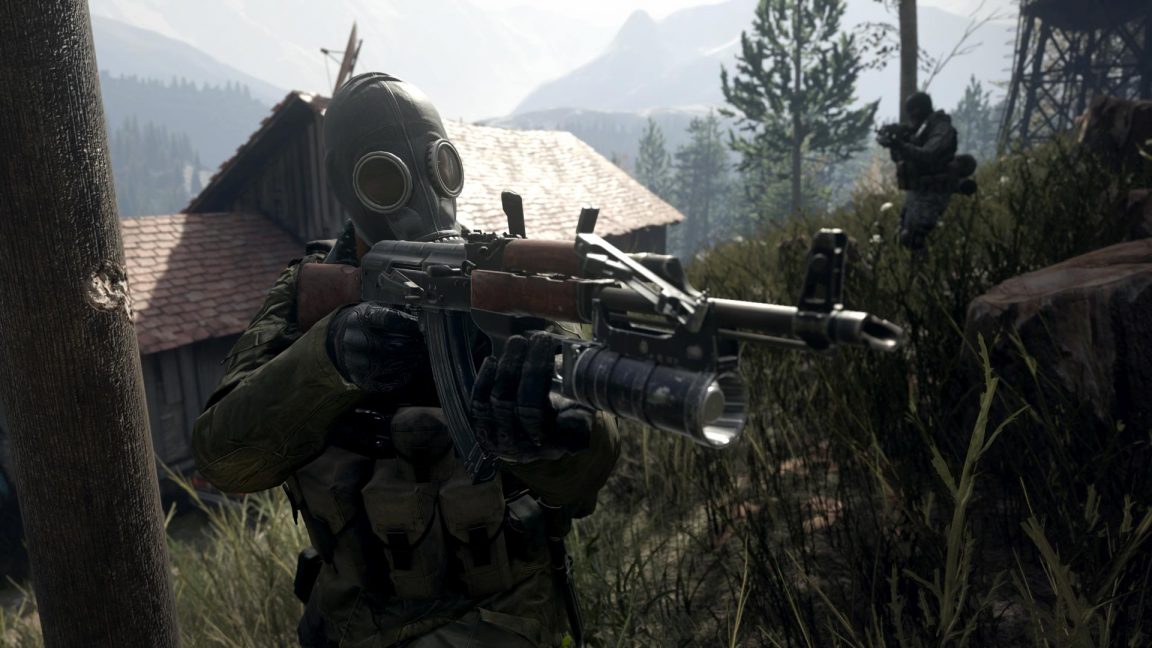 It’s pretty difficult to picture a gaming landscape where Titanfall would exist without Call of Duty. But we’re living in a world where Call of Duty is now aping its opponent, desperately chucking jet-boosts and wall-running into the last three games in the hopes that it can re-energise the franchise while cleaving to the familiar formula (a lost cause, since COD’s maps are still built for glorious boots-on-the-ground gunning). Even Battlefield 1’s basic ability to peek over walls feels fresh and exciting and smooth compared to Infinite Warfare’s damn stubborn refusal to allow anything more than to duck behind cover.

In the FPS multiplayer world, what does Call of Duty stand for any more? Christ, who is it even for?

Battlefield 1 has parked its tanks on the lawns of those craving gritty, mature objective-based gaming – and they nicked the pseudo-deep but deadly exciting multi-protagonist solo mode narrative when Activision wasn’t looking, too. Destiny and Halo have got the future sown up. Meanwhile Titanfall 2, the young pretender created by former Infinity Warders, has made a good stab at capturing the fast and fluid market, even though only five people actually bought and played it. And leading the shooters’ New World Order is the campy-as-hell Overwatch, a game that defines ‘easy to play, hard to master’.

That leaves COD stuck in the middle of nowhere. Clowns to the left of them, jokers to the right. While other games have developed their own styles built on solid foundations, Call of Duty feels sluggish and dated and completely lost as a series.

But Call of Duty ain’t dead yet. 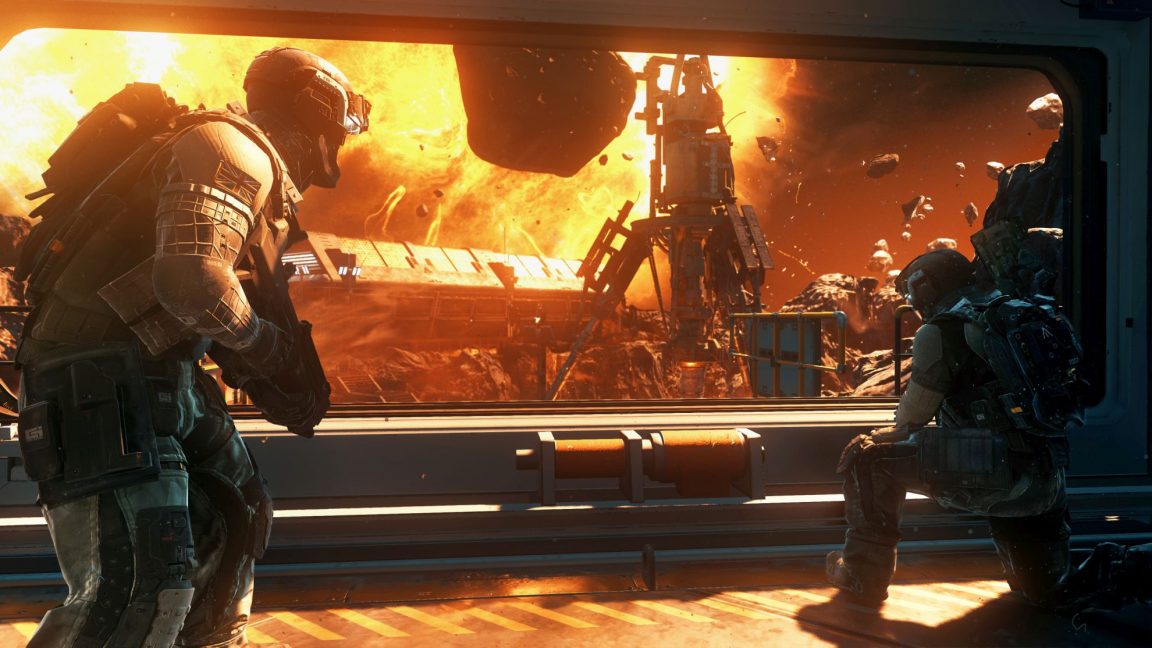 “Russia and America are cosying up, Syria’s in flames, Europe’s burning from the inside-out and Middle Eastern tensions are… tense. And we’re not making a military shooter about it?”

Call of Duty did a lot more than toss us into the far-flung future. It trashed its history with a clean head-shot. The original COD came around a few years after Saving Private Ryan kickstarted pop culture’s most recent affair with World War Two. So the game was in a good position: WWII is an instantly recognisable, relatable period. By the time Modern Warfare dropped, the scars of the Iraq War were still fresh, and pretty much continued to be for the sub-series’ duration. Using relatable parallels to real world wars gave COD a power, not to comment on society, but to reflect and engage with gleeful gamers (while still doing what Call of Duty excels at. i.e. entertaining the shit out of me). Hell, you know you’re in trouble when Infinity Ward’s lead concept artist Thomas Szakolczay says, “We still wanted it to feel like war was happening and it was almost like we wanted to have the grit of a World War II game” and Infinite Warfare’s what you get.

We live in a time when Russia and America are cosying up, Syria’s in flames, Europe’s burning from the inside-out and Middle Eastern tensions are… tense. And we’re not making a military shooter about it?

It’s telling that to find the best-selling COD game, you’ve got to go right back to Modern Warfare 3. Gamers were on-board with hyper-frantic, recognisable worlds at war, from WWII to modern-day via Black Ops’ fine-tuned Vietnam expedition (another cinematic cultural touchstone). And we even went along with the futuristic Black Ops II, because hey, it was kinda novel to place Call of Duty’s silky smooth gameplay in 2025. But ever since the Doc Browns at Activision whisked Call of Duty to the future, more and more gamers have logged off. I’m not saying there’s a clear correlation between declining sales and giving bastards the ability to bunny hop over our heads and shoot us in the back, but… 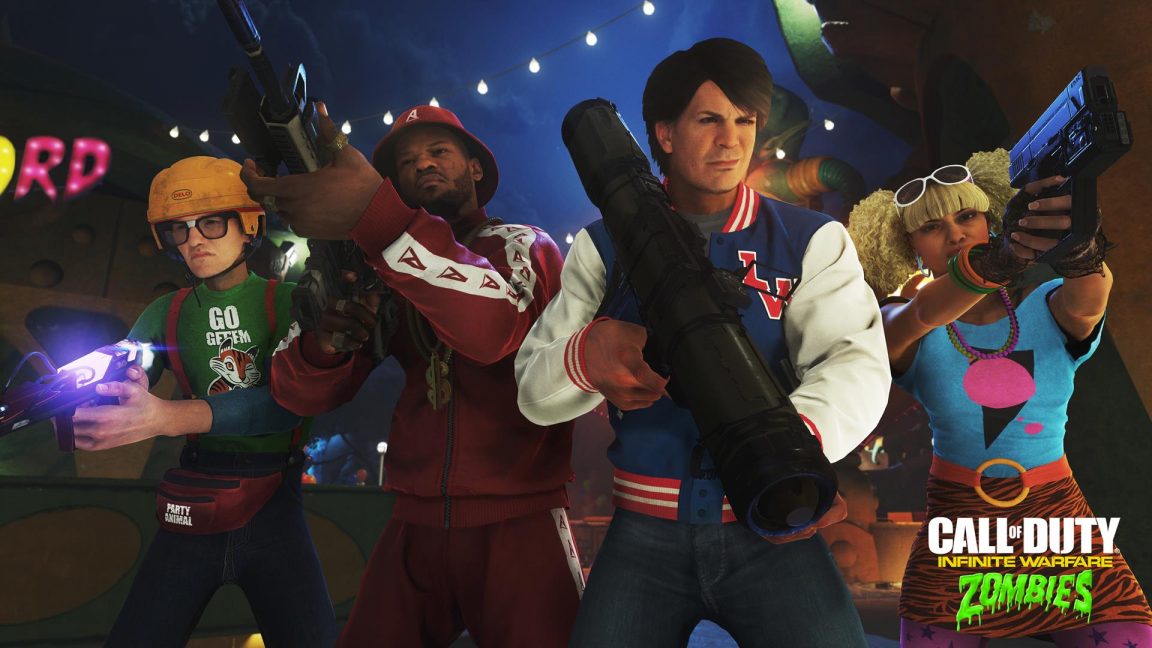 With its rivals closing in, pincer formation, the series is at a crossroads. If Call of Duty isn’t retreating, what path does it take now? Resident Evil, Metal Gear Solid V and Gears of War 4 prove that soft reboots, which expand on – rather than bury – the original can work. So giving Call of Duty a reboot (read: kick up the arse) would seem the most popular choice among fans, if they don’t blindly churn out the same old stuff. Wasn’t Infinite Warfare just rush-job DLC for Black Ops 3, knocked up on a lunch break? The series has been at its best when it toys with its existing formula, rather than rewriting the rules (think of MW3’s minor tweak from killstreaks to scorestreaks, which reward players for more than just stunning displays of slaughter).

But if COD continues to ride the wave of current pop culture, a whole other direction opens up. See, Call of Duty is still stuck in its brooding Dark Knight phase; it’s a humourless, self-absorbed world where no-one ever smiles. Because soldiers are serious, and soldiers don’t smile, son. You salute and say incredibly serious things in a serious tone. Ooh-rah. But the rest of the world has lightened up, Guardians of the Galaxy-style. You can see it with the lighter tone of Gears 4, and games that are actively rebelling against the shit-brown visuals of the last console generation by bringing lively, comic-book colour into the mix. 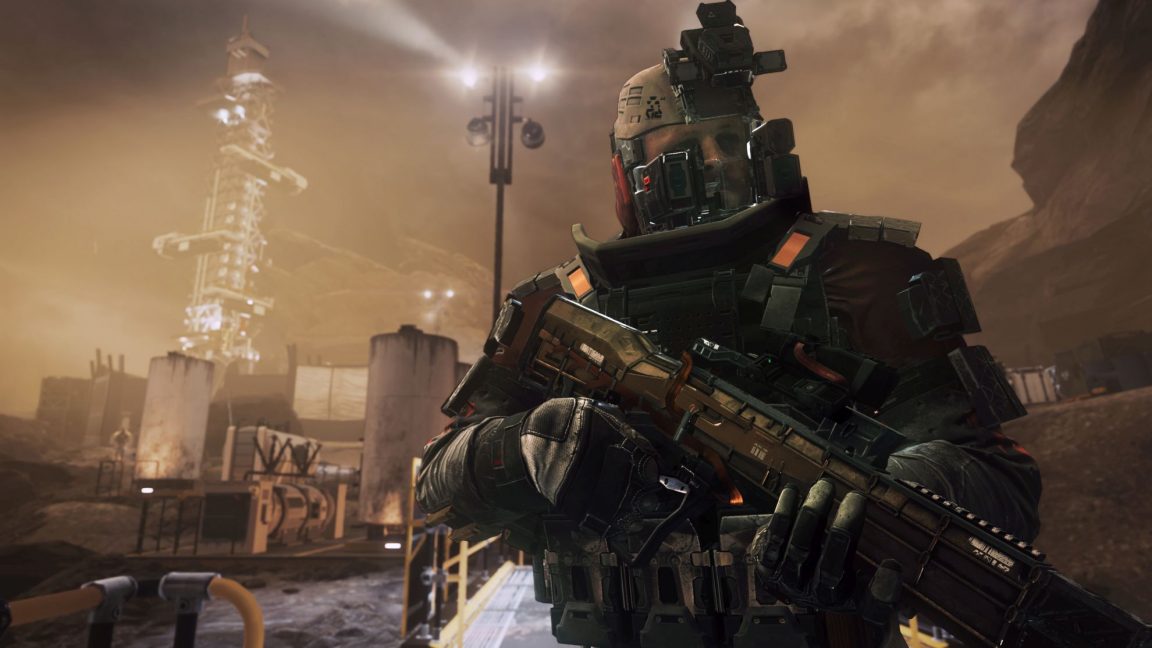 It’s just possible that Activision will embrace the series’ uber-macho super-seriousness, and play it for chuckles, placing an OTT tongue in their battle-weary cheek. Think of it as the bastard spawn of a dirty affair between Far Cry 3 Blood Dragon and Gears of War – they’re in Paris, they have one Martini too many, wake up nine months later with gaming’s equivalent of The Expendables. Call of Duty: Deadly Kill Snipe Assassins. This isn’t virgin territory here. Infinite Warfare’s Zombies in Spaceland is awesomely cheesy, self-aware and self-deprecating, even by the standards of the wildly goofball mode.

Wherever we’re Warfare-ing next year, Call of Duty needs the courage to play with the genre. It’s hard not to see parallels here with the James Bond films, another iconic series of pop culture that started out self-assuredly defining trends, before retreating into the safety of following them when it got too big, too afraid to lose mega-bucks. When was the last Call of Duty was brave enough to bring us moments like All Ghillied Up and No Russian? Now is the time to be heroes, soldiers. Now is the time to confidently revel in FPS creativity without blowing up your core gameplay.

And damn it, whatever you do, don’t mention the future war.