Trico begins to respond to your commands, and you’ll need to pass some tricky guard problems. 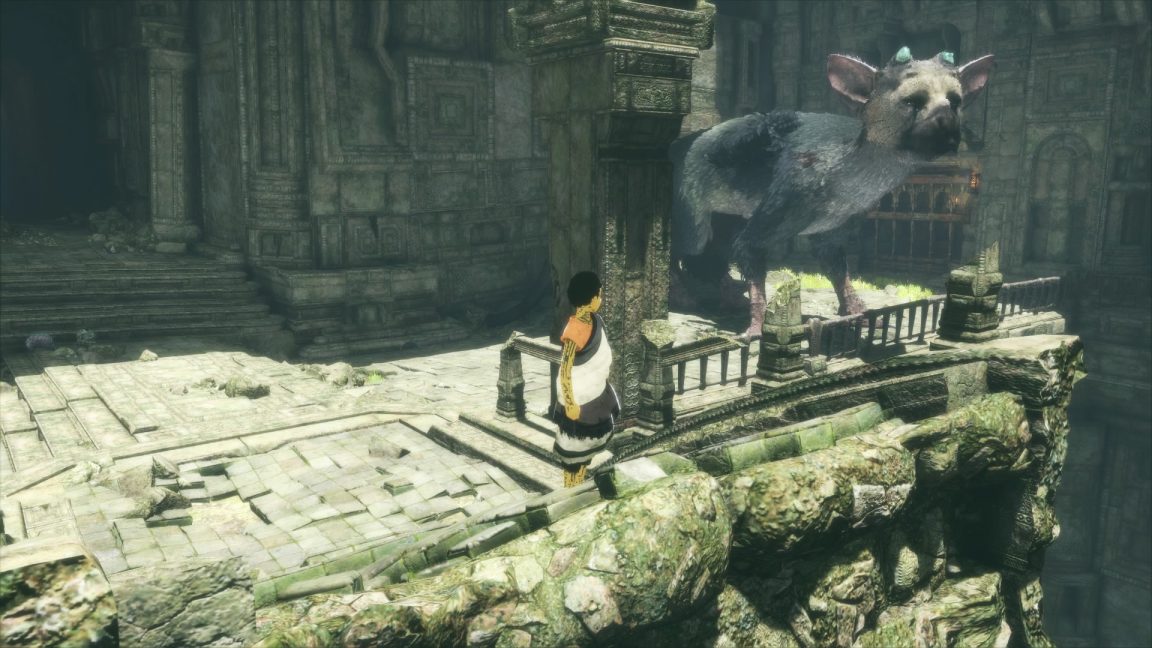 You’re now outside facing a broken stone bridge, which you will cross later. You want to head through the grill on the right of the entrance and out the other side, where Trico will follow. It’s a one-way gate, but you don’t need to worry about that just yet.

It’s in this courtyard that you can begin to issue commands to Trico. It will stomp, climb and move in a general direction if you hold down the shoulder button and a face button. It’s not an exact science unfortunately, so be patient and be prepared for some frustration. Get it to stomp on the crate and free the barrel, which it will then eat. Now practice some of the commands to see how Trico reacts.

How to give Trico commands

Here are your commands for Trico: 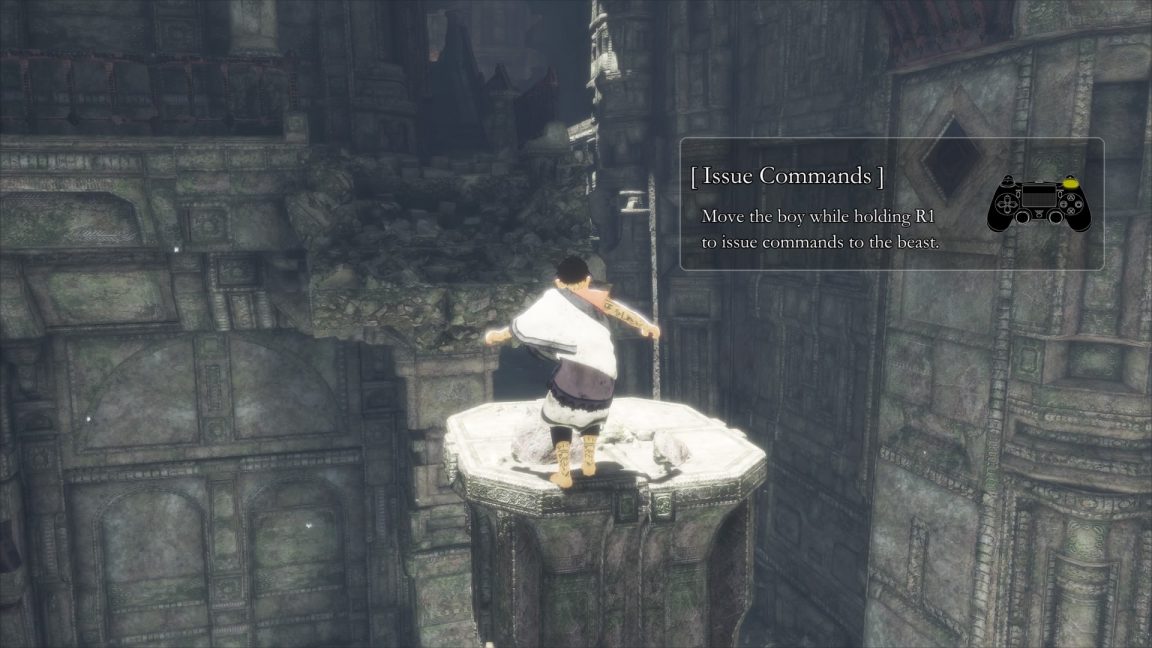 Use Trico to climb to the middle post in the courtyard, then jump over to the balcony and through the passage directly opposite, where you’ll be in the same area as the broken stone bridge. 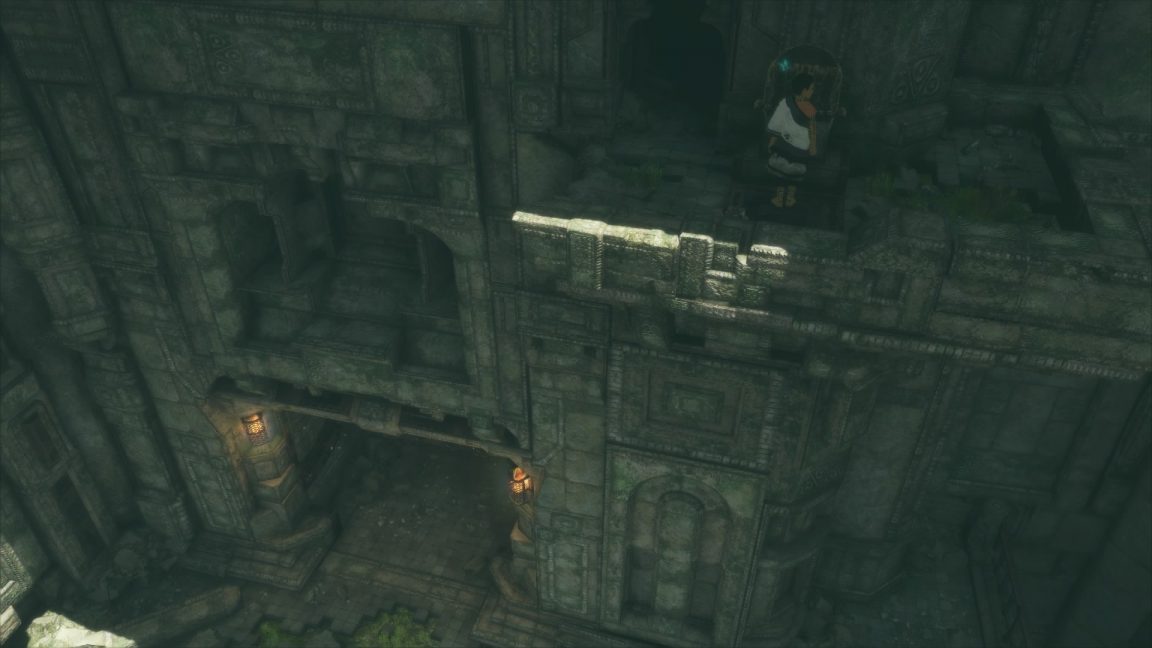 Pull the lever to open the gate and let Trico back through to where the broken bridge is.

Climb back on Trico. Pressing R1 and X button will make it jump. Do that to jump on the pillar on this side of the stone bridge, and then again for a leap across the broken bridge. 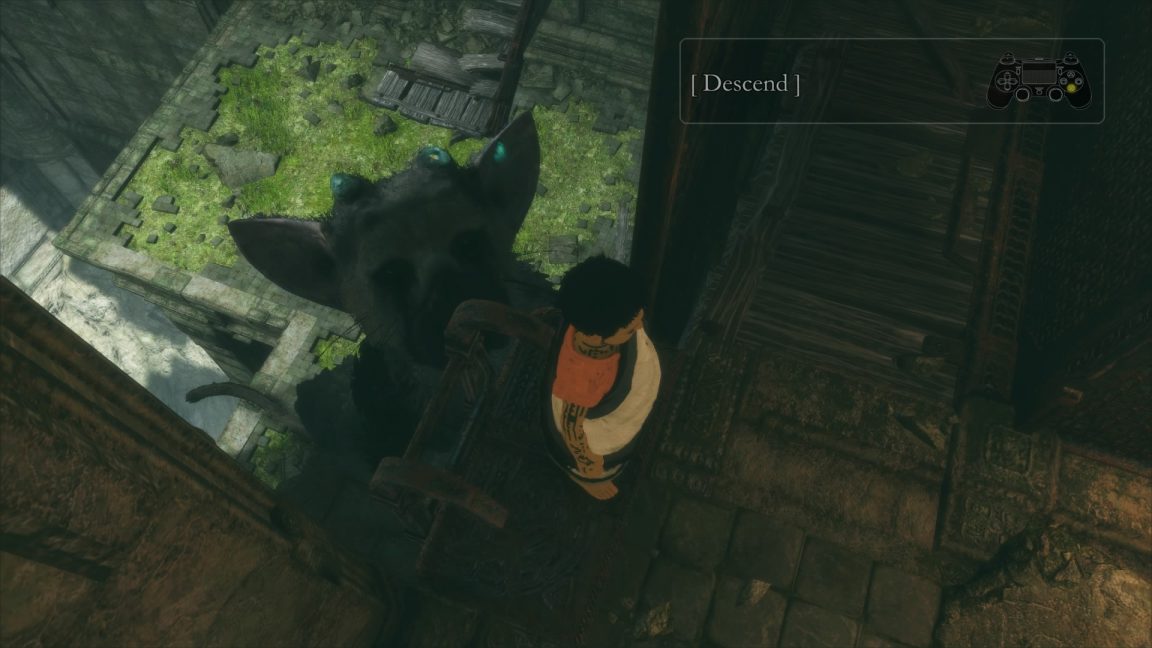 Once facing the steel gate, press triangle and R1 to the left of it so Trico comes to you. Then climb up it, and it will stand on its hind legs, enabling you to jump onto a ledge and up a ladder (ignore the wooden structure here, you don’t need to get on that). This can be frustrating in such an enclosed space, but persevere. 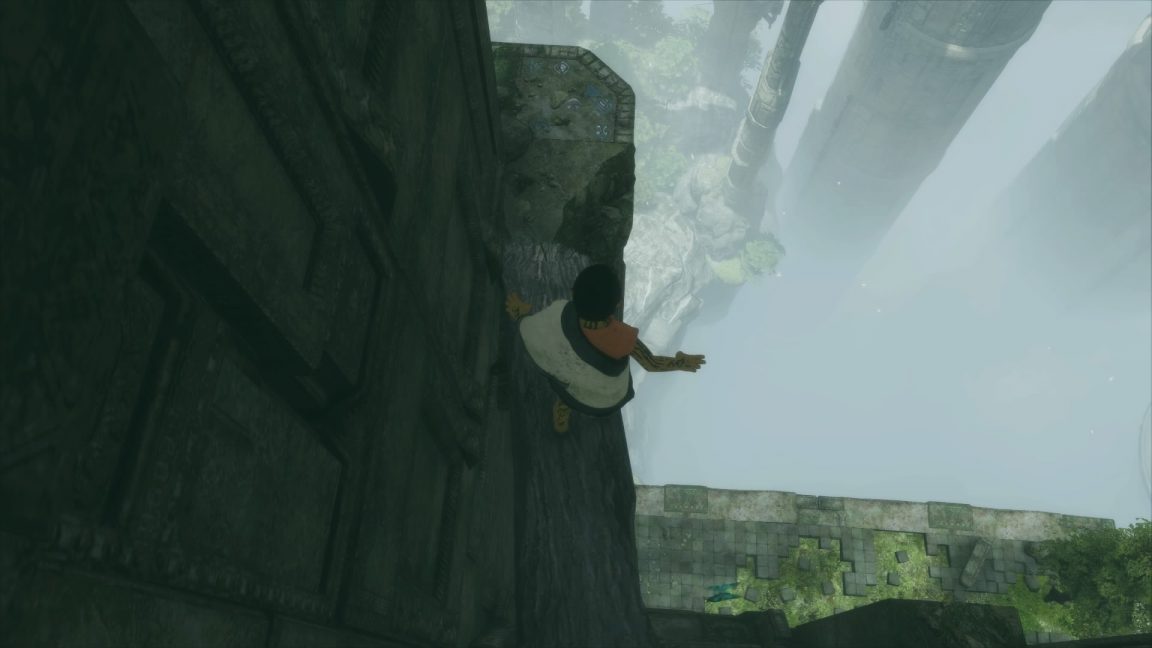 Follow the ledge to the right, over a wooden plank and around the corner, then climb up and scramble through the small hole in the wall. 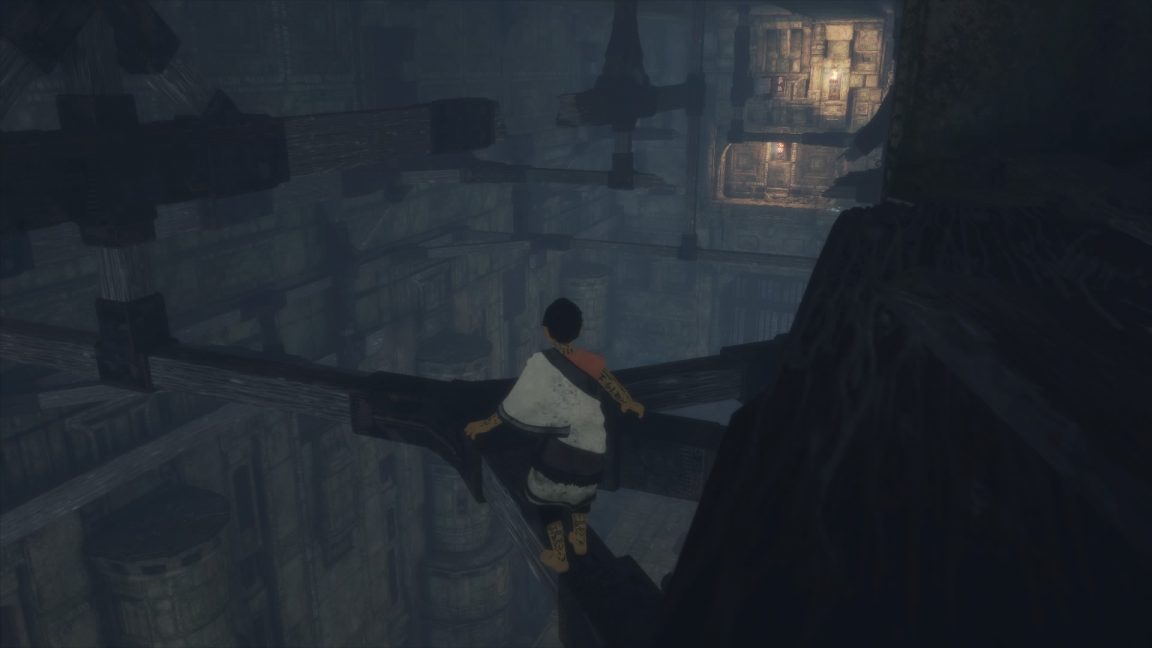 How to pass the rotating guards

You’ll find yourself at the ceiling of a large hall, with two rotating suits of armour on the floor below. Step down onto the wooden beams here, and cross over to the lights at the same height as you. 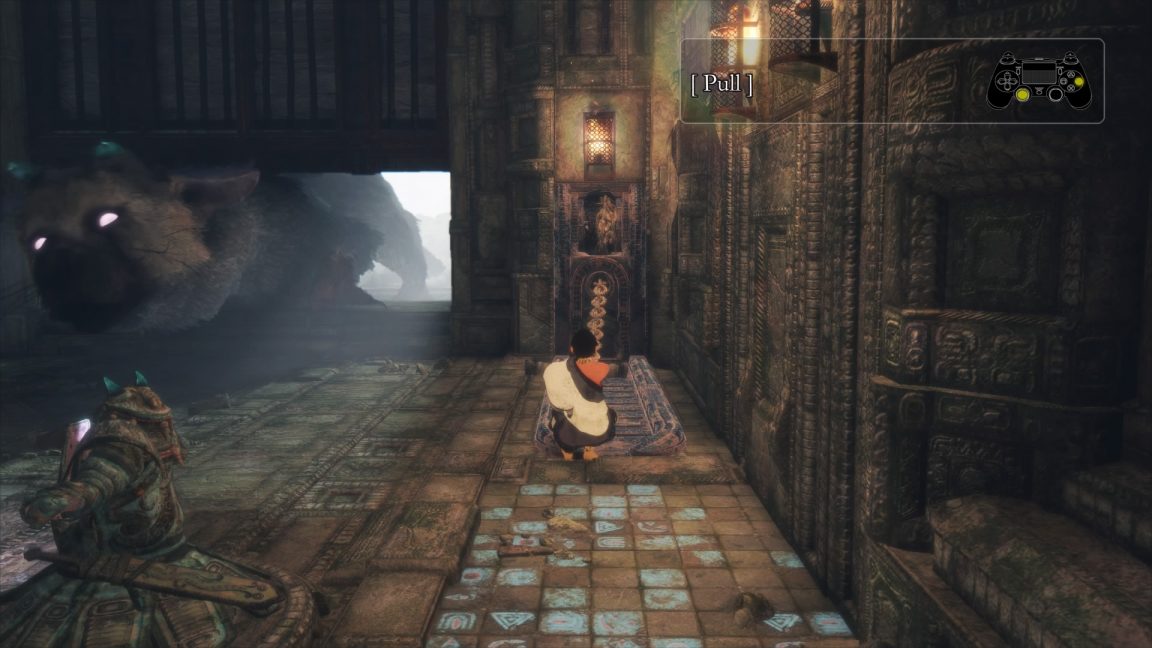 Pick yourself off the floor when you inevitably fall and walk over to the lever, which will raise the gate. Avoid the light from the guards and you won’t activate them. Once Trico scrambles through it will stomp and throw them around the room. Now calm Trico down again. 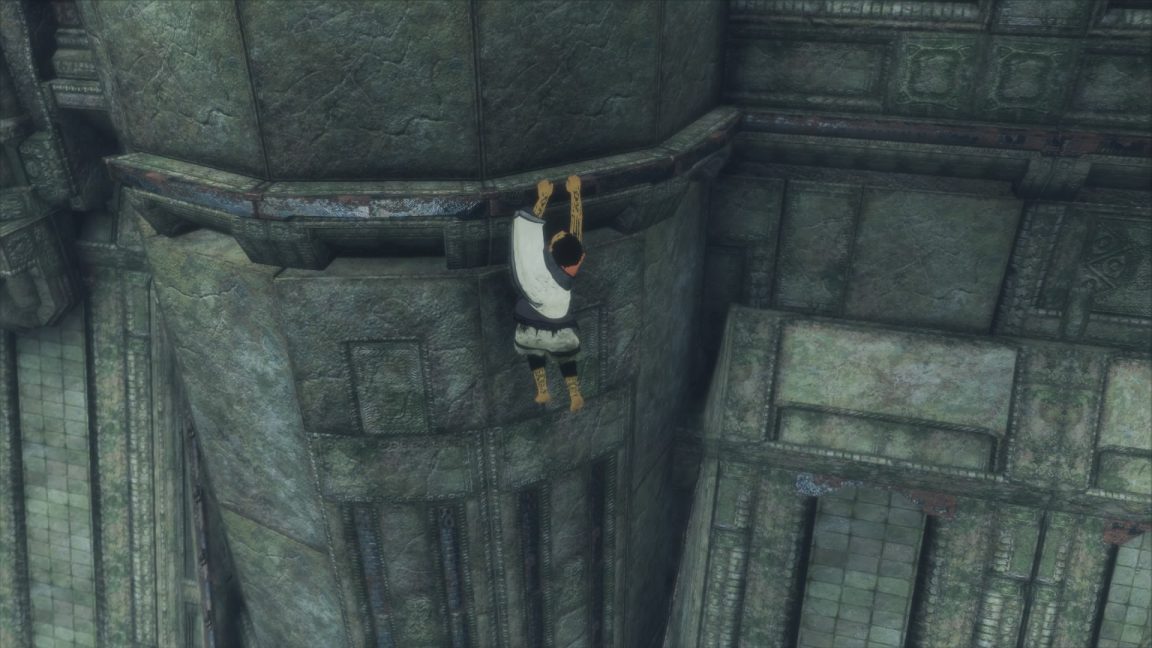 Walk to the end of the hall where the closed gate is, climb up on to Trico’s head and press R1 and triangle for it to get up on hind legs again. Climb up the ladder and through the small hole where you’ll find yourself outside again. Follow the ledges to the right and through the next hole.

Once again you’re standing in the ceiling of a hall with rotating guards below. Drop onto the wooden beams and work your way across them to the lights. Yep, the wood gave way. Sucks to be you. You now have to deal with opening the gate while avoiding the glare of six guards.

Time it right and you can do it with patience. But if you do alert the guards, drop down off the path where you’ll find a ledge below the main hall. You can then run along back to the chain, pull it and open the gate, where Trico will do his stomping and nudge the enemies off the path to their death. 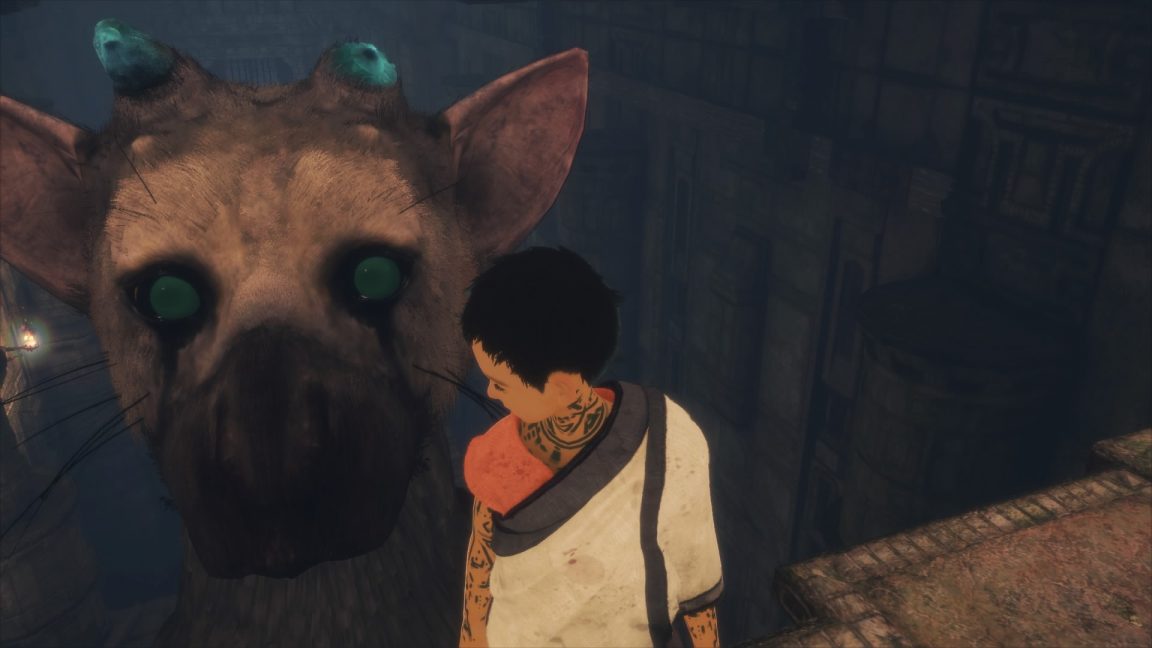 Again, climb Trico, calm it down, then lead it to the next locked gate and get it to stand on its hind legs (triangle and R1). From here, run through into the next area and pull the lever to open the gate, then climb the ladders and meet Trico on the thin stone bridge. 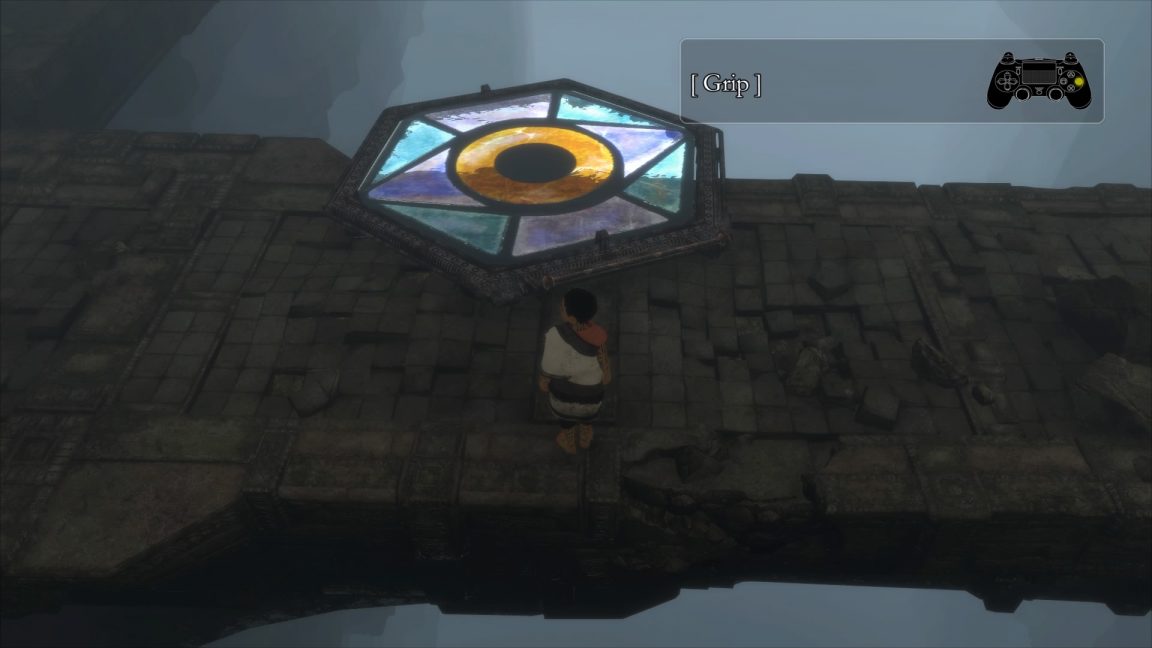 There’s another stained-glass eye here, which you’ll need to push over the edge. 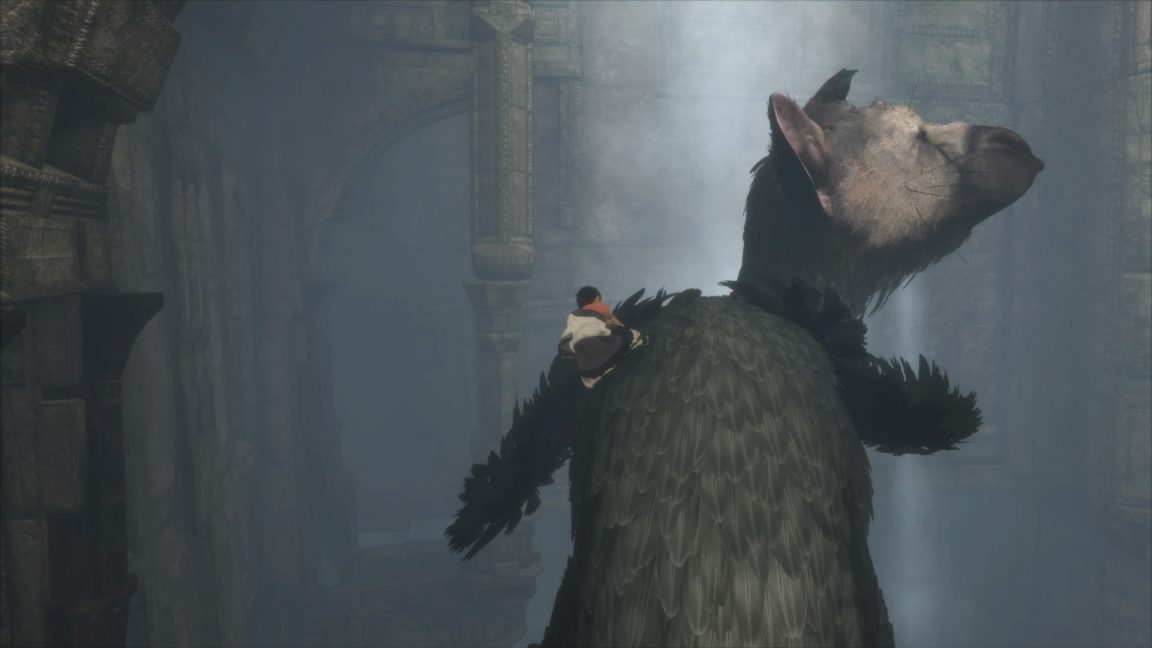 Now climb on Trico and let it do the hard work as it climbs up and around the ledges here, eventually landing in a small courtyard with broken rail track. Follow it through the one-way gate.

Next: Part 7: the blue pot puzzle, how to get pass the stained-glass eyes