Team Skull arrives on the scene, plus your first major city adventures. 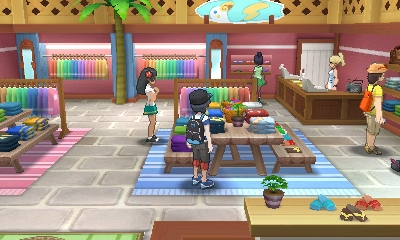 After your visit to see Professor Kukui in his office and being handed the very useful gift of a Rotom Dex, you’re on your way once again – first to Hau’oli City, where there’s a school of trainers waiting to teach you a battle-related lesson or two…

Trainer’s School: an education in battle (and the EXP Share)

After a brief jaunt to the Pokemon Center in Hau’oli City you’ll be pointed towards the trainer school. You can’t really miss it – we’re still in full-on tutorial mode.

Outside the school there’s some items to grab, and then you’ll be tasked with battling 5 trainers in the school in order to ‘pass’ your training as a Pokemon Trainer. You’ll also be given the EXP Share item as part of story talk – this is a vtial item as it shares the experience gained in battle out between all the Pokemon in your party.

Once the trainers are beaten, there’ll be more story beats and you’ll be sent into the city proper.

Hau’oli City is the first major city of the game and it’s a pretty little place – there’s a beach, there’s tall buildings, a wide variety of shops and even a bunch of gardens with tall grass.

These gardens are gated off, but head up to a gate and press A to get inside and get up into the long grass. In this grass you can find several new Pokemon. There’s also some items you can pick up – either out in the wild through exploring or off friendly NPCs.

Down on the Marina after a bunch of optional exploring and mandatory story events you’ll encounter Team Skull for the first time. These knuckle-heads are always harassing somebody or other… and today, they ultimately pick on you.

It’s time to battle, then. The team Skull Grunt has a Zubat at level 8. Zubat is weak to Electric, Ice, Psychic or Rock attacks – if you’ve any of those, hit hard with them and the battle will soon be over. They’ll scarper.

After defeating Team Skull, Captain Ilima will also want to fight you though for much more noble reasons. This is your first island captain, and as such you can expect this to be a more challenging battle as a result.

Ilima uses a Yungoos at level 8 and a Smeargle at level 10. Both are weak to fighting-type moves, but you can still take it down without. Be careful, and don’t forget to heal if you need to.

With Ilima defeated, it’s time to head to Route 2.