Dishonored 2 offers plenty of powers for you to cause carnage with, but the best uses are always the unintended ones. 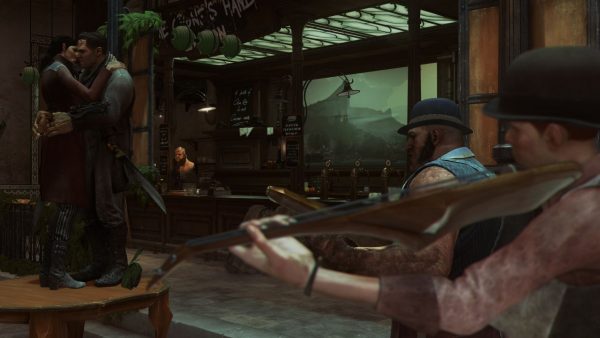 It was fun to follow the community around the original Dishonored because of the sheer skill they employed in mixing the in-game abilities together to create unexpected solutions to the various challenges they faced.

Dishonored 2 is no different, and we’re just starting to see how players can use the game’s abilities to solve problems, outside of their regular use.

One such power Emily gets in the game is called Doppelganger. As the name suggests, it allows her to create a copy of herself to distract enemies, or, as demonstrated by the GIFs below, remove the fall damage.

Tom Francis, developer of Gunpoint and the upcoming Heat Signature, has been sharing GIFs on his Twitter recently of his playthrough, when he stumbled upon this great use of Doppelganger.

Basically, if you want to take no fall damage, create a doppelganger where you’re going to land. When you jump and land on it, it’ll go into the throat-slitting animation and you’ll take no fall damage. It’s weird seeing Emily kill herself, but it works.

Oh my God, I just discovered I can survive a long fall by creating a doppelganger down there and dropkilling her. What am I. pic.twitter.com/Y8mlu0VpZ0

You can even do it in mid-air if the ground is too far, as you can see.

Update: if the ground is too far away to make one, you can do it mid-air. pic.twitter.com/qtA7Je7ZUR

This trick will no doubt be used by speedrunners, not to mention its obvious use for everyone else.