A keyboard and mouse for PS4 shooters. What? 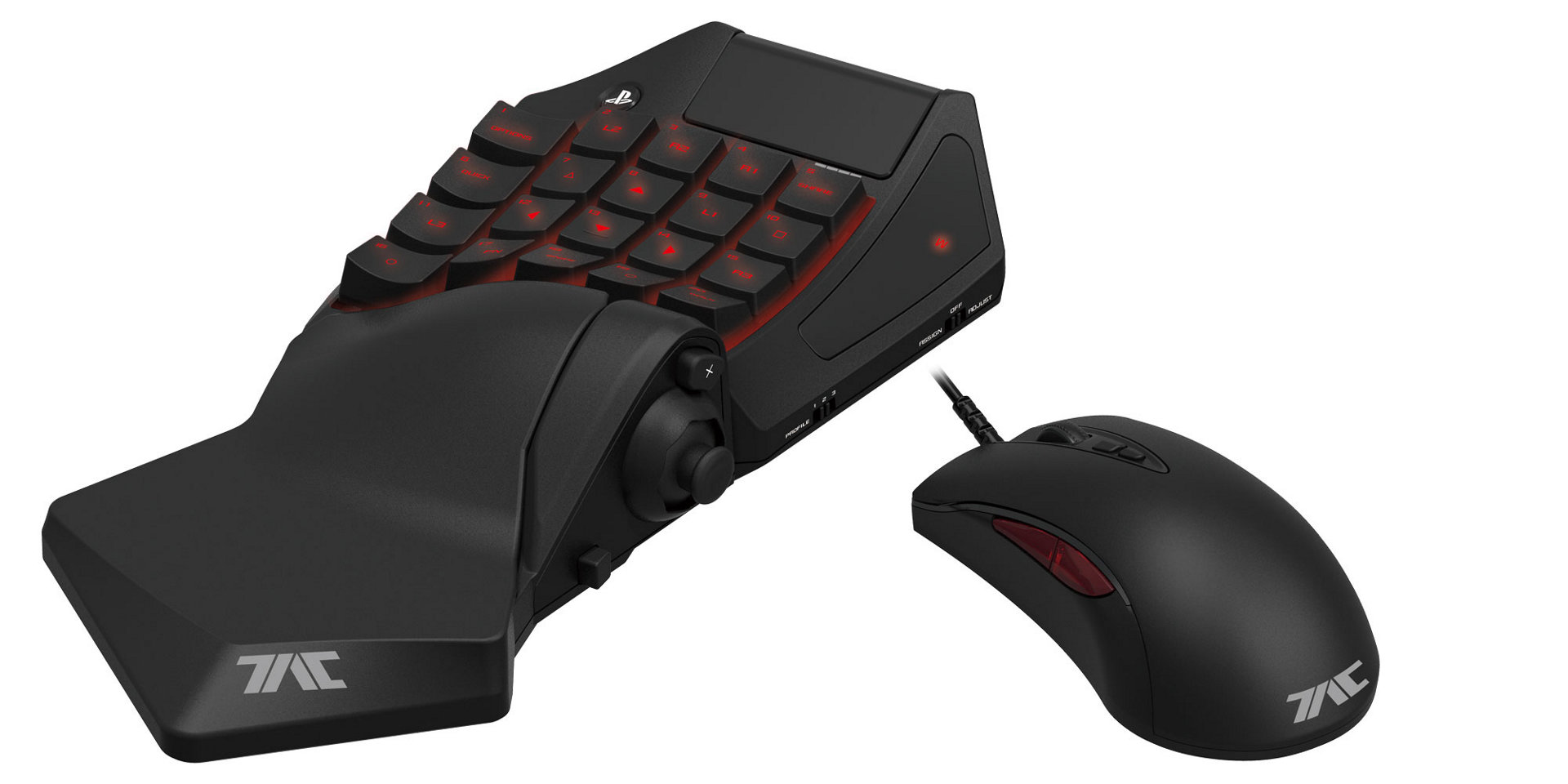 Just how much of an advantage does using a keyboard and mouse offer over good old analog sticks? It’s an accepted truth that mouse input in particular offers an outright advantage over control pad sticks especially in a shooter setting – and peripheral manufacturer Hori seem determined to find out just how much, and they’re doing so by injecting some keyboard and mouse players into the console populace.

They’re doing this with the Tactical Assault Commander Pro (aka the TAC Pro), a streamlined set of PC controls that are designed to just plug and play with your PS4. It’s something that I’m honestly astonished Sony is allowing considering the benefits of mouse-based control – but this is an officially licensed product. Everything is all above board, just as they are with the likes of Hori’s Arcade Sticks.

“I thought it was probably going to feel clumsy and awful, but no – it felt pretty much like playing on a PC, albeit with heftier auto-aim stuff going on.”

I first saw one of these things at Gamescom. I was walking past Hori’s modest little booth in the business area, which seemed to mostly be for trying to sell their products to retailers and the like. They weren’t exactly focused on press appointments, but I stopped briefly to take a look at this thing. It was propped up on one corner of the stand, being demoed with Call of Duty Black Ops 3 and on one of Hori’s little portable monitors for the PS4 (which also looked rather cool, incidentally). It’s a weird thing, so it caught my eye.

A few months later I had the chance to test it out in full and I couldn’t say no. It’s shooter season, after all… I’ve been playing a hell of a lot of Battlefield 1, and there’s also Titanfall and Call of Duty of course, plus other first-person games like Skyrim Special Edition and Dishonored 2, plus more Destiny raids to undertake. I’ve tried using it now in most of these games. But first, here’s a hilarious eSports dubstep-blasting trailer for the thing.

So. There’s essentially two bits in the box. The first part is a truncated keyboard with 20 mechanical keys plus some PS4-driven stuff. On here are all the PS4 buttons that aren’t easily represented on a mouse. The mouse features left and right triggers for shooting people dead, but things like Square, Triangle, L1 and the like are represented on the keys, as is directional control in a typical WASD keyboard layout. There’s also a walk button – since keys are digital and not analog, you’ll want to hold this down while moving if trying to do so slowly. On the side of the keyboard is an analog stick in case you need one for some reason while using this device.

The other half is, of course, a mouse. It has a DPI of 3200; if you don’t get the jargon, just understand that’s pretty much average for a decent mid-level gaming mouse on PC. The mouse only has a few buttons, and its functions are pretty obvious. It has a scroll wheel that can be clicked to function as R3, most often melee, plus shortcuts for L1, R1 and buttons to change the mouse sensitivity on the fly.

“There’s a Snipe button which vastly reduces the mouse sensitivity, the idea being that you can hit it when you’re trying to aim a difficult shot and don’t want to overcompensate your adjustments.”

It all looks rather complicated when you get it out of the box. It’s a lot of keys, and I thought for a moment it wouldn’t work at all. Setting it up is easy – the mouse plugs into the keyboard part and that plugs into the PS4. It’s immediately recognized. That simplicity continues: I thought it was probably going to feel clumsy and awful, but no – it felt pretty much like playing on a PC, albeit with heftier auto-aim stuff going on that’s exclusive to console. One major exception to keep in mind is that consoles are often pretty liberal about the auto aim, and games that don’t allow you to turn this completely off are going to feel fairly iffy at first with a keyboard and mouse, but it was also something I quickly adjusted to after a little bit of use.

There’s some extra features that feel a little cheat-y included as standard, too. One such feature is the Snipe button. Hitting it vastly reduces the mouse sensitivity, turning you from mega-slick quickness down to molasses, the idea being that you can hit snipe when you’re trying to aim a difficult shot and don’t want to overcompensate your adjustments. It works, and it’s smartly placed so that it’s easy to hit but also unlikely to be accidentally stabbed in a crucial moment. The same is true of the walk button, though I feel that one actually needs to be a little more accessible. 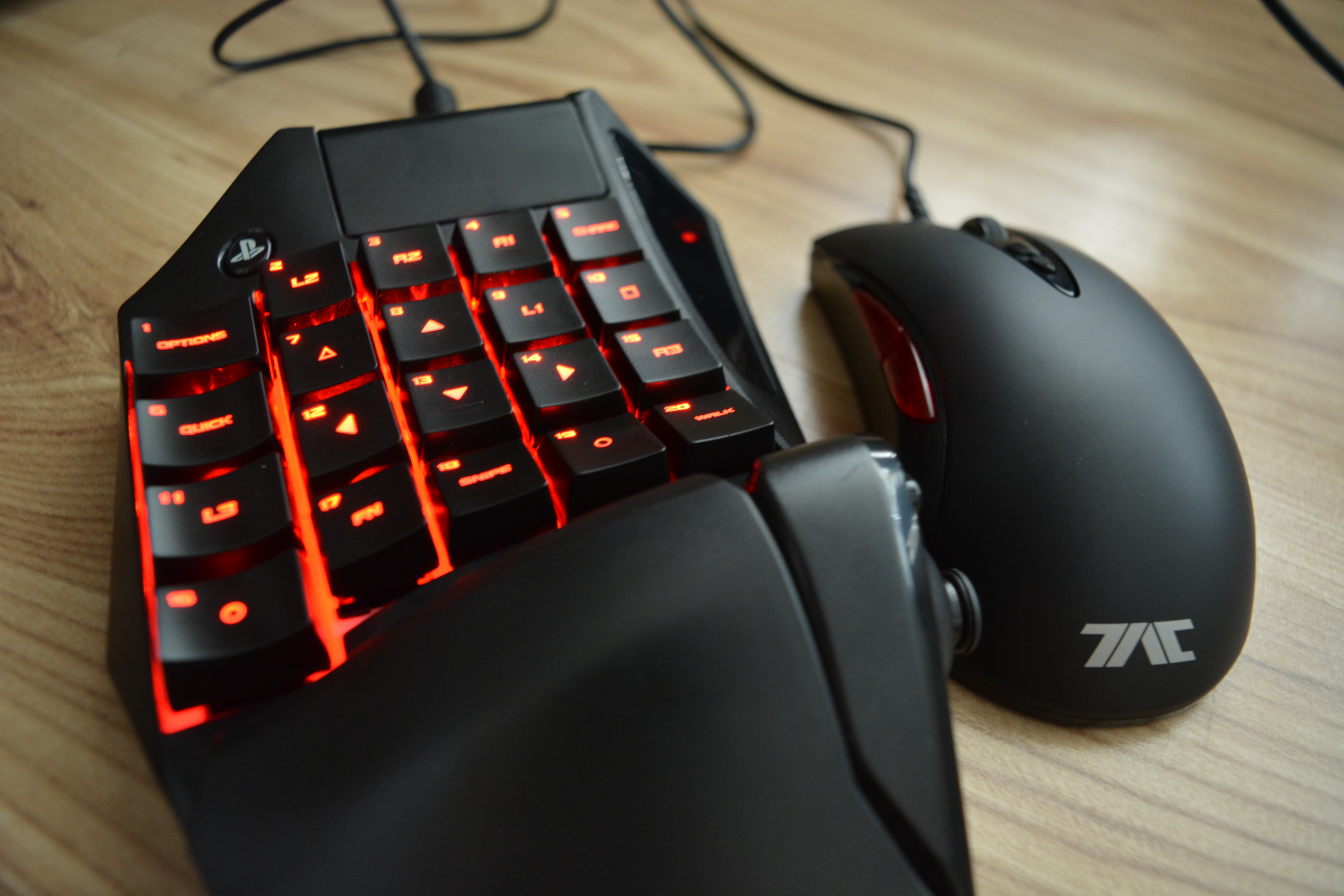 If the button layout frustrates at all, the TAC Pro can be easily reprogrammed. There’s a basic display built into the keyboard to accommodate this. The process of remapping is a little on the fiddly side, but you also shouldn’t have to use it much: you can store three different pre-sets and switch between them easily, plus the basic setup will plug-and-play with pretty much any shooter with standard shooter controls… which is nearly all of them.

That’s a testament to this design, as is how good this feels even without adjusting any game settings, something which probably took the designers at Hori a while to nail. It’s good stuff.

There’s a few nitpicks, of course. I’m right-handed, but if you’re not and you like to actually use your mouse left-handed you’re screwed. Both the keyboard half and the mouse are ergonomically designed for right-handed folk. The mouse is usable with your left hand albeit with the loss of access to L1 and R1, but the keyboard part strikes me as impossible for lefties. I also wish the keyboard half felt a little more sturdy, too – you obviously need to rest this on a table, and while it’s well-built I just find myself wishing it was a little heavier and difficult to accidentally move around whatever surface you play on.

After a few hours of the TAC I’m pretty much convinced of its quality – it’s well-made and does exactly what it claims to. After a little bit of adjustment to key placement I felt like I was playing at the same level I would with a controller – if not higher. It never did quite feel as snappy as keyboard and mouse does on PC, however, and if I had to guess that’s down to games being programmed with gamepad input in mind and not prepared for this sort of speed. Your accuracy will be higher, but your turning speed won’t be as snappy as it is for actual PC players – but that’s a fair trade-off. You’re still on console, after all.

That’s the Hori TAC Pro – it’s a weird little thing, but I like it. It works well. I’m still not sure who it’s for – if you’re that keen on keyboard and mouse, surely you already own a PC? Still – anybody who finds themselves hurting for this style of control and without access to some sort of Steam-running machine will find some solace in this neat bit of kit.