The Pokemon Company has been dropping a lot of information-heavy trailers and releases for Pokemon Sun and Moon over the last few weeks, and one of the key things they’ve revealed are the final evolved forms for the starter Pokemon Rowlet, Litten and Popplio.

As shown in the trailer above, Rowlet will eventually become the archer-like ghost and grass-type Decidueye. Litten will evolve into the fire and dark-type Incineroar complete with a fiery wrestling belt. Popplio will evolve into the singing Primarina, which is a water and fairy-type Pokemon.

Also newly revealed by The Pokemon Company over the last couple of days are the Z-moves for the three starter Pokemon’s final evolutions.

In case you missed it, Z-moves are powerful special attacks you can use once per battle, provided you have a specific item in-game. The trailer, which you can watch below, reveals the Z-moves your starter Pokemon Decidueye, Inceneroar, and Primarina will have in the game.

The Mole Pokémon Alolan Diglett live near volcanic areas, so they have few places to hide themselves away. It’s said they developed the hairlike metallic whiskers which grow from the top of their heads as a survival mechanism for the hostile volcanic environment. Their whiskers enable them to sense surrounding areas without exposing their face above ground. Alolan Diglett can have the Tangling Hair Ability, which is a new Ability that no other Pokemon has previously had. With the Tangling Hair Ability, opponents that hit this Pokemon with a move that makes direct contact will have their speed lowered by one.

Alolan Dugtrio is the evolved form of Alolan Diglett. Alolan Dugtrio’s whiskers grow throughout its life at a very slow rate, shining with a brilliance akin to that of golden hair. In the Alola region, this Pokémon is revered as an incarnation of the god of the land, and it’s treated with great importance. Removing any of this Pokémon’s whiskers is strictly prohibited. There is a superstitious belief that many Alolan Dugtrio come out of their burrows on a day when a volcano will erupt 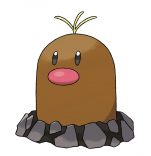 Pokemon Sun and Pokemon Moon is out November 18 on the various Nintendo 3DS and 2DS consoles.