Liam and PeeBee are your two new companions in Mass Effect: Andromeda. 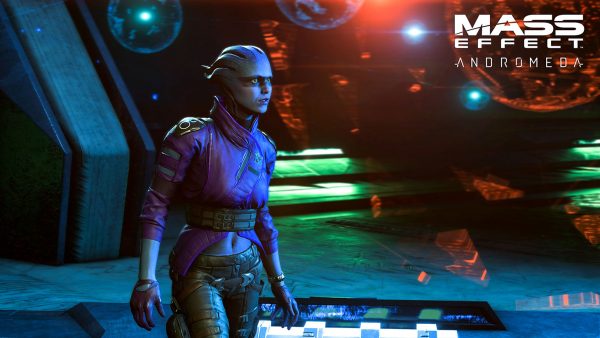 Shepard and the gang won’t be returning in Mass Effect: Andromeda. Your new hero, Ryder, will be accompanied by two new squadmates.

As part of the magazine’s cover story on the game, Game Informer got to spend some time with the new crew, and came back with a better understanding of how they’re going to work together.

First, there’s Liam, an ex-cop who’s tasked with security. “Liam is the youthful, enthusiastic, and in some cases, the idealistic follower that you get,” said creative director Mac Walters.

Liam has a lighter, upbeat tone and is very hopeful, and also very passionate. In one scene the magazine played, Liam was quick to get angry when things didn’t go as planned, but “he’s got Ryder’s back,” according to Walters.

PeeBee is an Asari who split off from her Ark to adventure on her own, and unlike Liam, you first need to meet her in a mission for her to join you. PeeBee has a sense for adventure and interest in alien technology.

She gets straight to the point, however, and doesn’t really care about social etiquette. “Her mind goes quickly as does her mouth,” added Walter. “It’s hard keeping up with her.” Unlike Liara from the original trilogy, PeeBee is “very bubbly”.

“PeeBee will buck the norm at any given time. She’s not about rules or culture or anything like that. She’s not even about teams or teamwork,” explained Walter. She’s in for the ride though, because she sees a leader in Ryder. “Her role in this is helping you find out more about this alien technology,” Walter pointed out.

For BioWare, the goal was to make the new team feel fresh, and the developer even axed a character the game initially had because it felt like a mix of old favourites.

“Sometimes writers focus on the quirks or specific nuances of the character [thinking] that’s what’s going to make this character interesting.

“Honestly, it’s a combination of a whole bunch of things, and what I say is rather than trying to make a really unique or memorable character through your writing, take a character who’s relatable and put them in a really unique situation and see how they react,” Walter said about the studio’s approach.

“That’s actually how I think you get the most interesting character development happening.”

Mass Effect: Andromeda is out in the spring on PC, PS4, and Xbox One.