THANK YOU to our more than ONE MILLION Civilization VI players. Your support means everything to us. Stay civilized! pic.twitter.com/71Ti9wSy4h

Civilization 6 has attracted over 1 million players. The news comes via the tweet above, which was posted on Friday – two weeks after the game’s launch.

Well done, Civilization 6 team! It’s a tremendous achievement and a significant milestone for any game, let alone one restricted to Mac and PC with no, you know, exploding heads.

Speaking of which, Civilization 6 is currently the third most-played game on Steam, just behind Valve’s own Dota 2 and Counter-strike: Global Offensive. With a peak of 83,516 concurrent players today, it’s hanging on above giants like Team Fortress 2, The Elder Scrolls: Skyrim Special Edition and that perennial favourite Civilization 5. 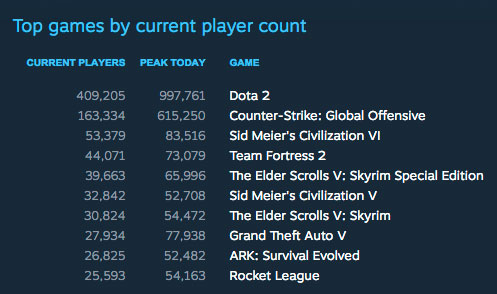 Meanwhile, Call of Duty: Infinite Warfare is much further down the charts, peaking at 15,436 players today. That’s not shabby by any means, but it’s funny that a release generally considered one of the tentpoles of the year on console and full of all that blockbuster stuff that’s supposed to go mainstream is being so thoroughly out-performed by Civilization 6.

Firaxis is having a great year, what with XCOM 2 and now Civilization 6. Maybe Call of Duty needs to go turn-based to get its PC fanbase back? “One more turn” is a siren song.