As you heard, Sombra was finally announced for Overwatch at BlizzCon 2016 after tons and tons of teasing by Blizzard. Now, that the opening ceremony is over, the studio has revealed more about the new hero.

Arekkz also breaks everything down we’ve posted below in the video above, in case you aren’t too keen on reading.

According to the official Overwatch website, Sombra is a hacker with a base of operations located in Dorado, Mexico. She was formerly affiliated with Talon, Los Muertos.

The website also provided some background information on her story, and we’ve pulled it and posted it for you here.

“One of the world’s most notorious hackers, Sombra uses information to manipulate those in power. Long before she took up the alias “Sombra,” she was among the thousands of children who were left orphaned in the aftermath of the Omnic Crisis. With much of her country’s infrastructure destroyed, she survived by utilizing her natural gifts with hacking and computers.

“After she was taken in by Mexico’s Los Muertos gang, she aided it in its self-styled revolution against the government. Los Muertos believed that the rebuilding of Mexico had primarily benefited the rich and the influential, leaving behind those who were most in need of assistance.

“Following her many conquests, she was supremely confident in her skills, but she was caught unprepared when she stumbled into the web of a global conspiracy—one that had also noticed her. With her security irreparably compromised, she was forced to delete all traces of her identity and went into hiding.

“She later reemerged as Sombra, upgraded and determined to find out the truth behind the conspiracy she had uncovered. Sombra launched an even more audacious string of hacks, and her exploits earned her no shortage of admirers, including Talon. She joined the organization’s ranks and is believed to have contributed to its massive cyberattacks against corporations with strong ties to their governments. These efforts incited a popular revolution in Mexico against LumériCo and breached the security of Volskaya Industries, the manufacturing arm of Russia’s anti-omnic defense.” 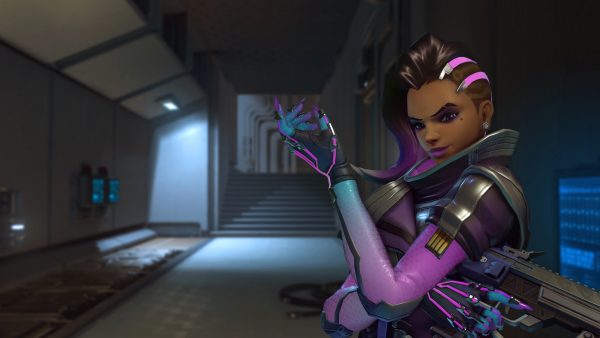 As you will note, Sombra is referred to as “she” in the Overwatch backstory as her given name is not known. On the official website, her name is blurred out, so we replaced those blocks with “she” for easier reading.

She will be playable on the PTS next week along with a new arctic map, Ecopoint: Antarctica, which is designed around 1v1 and 3v3 in a playable Arcade mode.

Once more information is made available, we’ll be sure to let you know.