What if WW1 had towering mechs and mighty war machines? 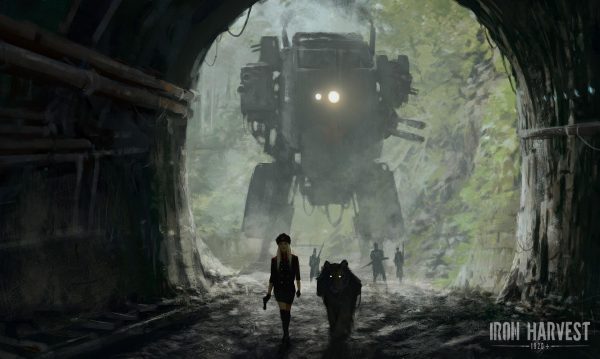 Iron Harvest is the new game from King Art, the German studio behind The Book of Unwritten Tales series and the upcoming The Dwarves. Iron Harvest is a real-time strategy set in the world of 1920+, the art project by Polish artist Jakub Różalski.

1920+ is a diesel punk take on WW1, in which the world was more technologically advanced, as evident by the use of mechs and other giant machines. After the war, these machines were re-purposed to fit civilian needs.

“After World War I farmers found a plethora of unexploded ordnance, barbed wire, weapons, shrapnel and bullets while ploughing their fields. They called it the Iron Harvest,” reads the game’s description.

There three main factions fighting for influence. The influential and developed Saxony Empire, the Polania Republic – a big agricultural empire that sits between Saxony and Rusviet Rusviet. Rusviet Rusviet has unmatched industrial and population potential, but the long war has taken its toll on it.

There aren’t that many details about what sort of RTS angle the game will take, but this comment from project lead Jan Theysen makes it sound like a mix of Company of Heroes and Men of War. Both games emphasised the use of hero-style units alongside normal units, and are quite unique in their approach to RTS.

“We love games like Company of Heroes or Men at War and want to bring a similar gameplay experience to this fantastic world Jakub created. You lead hero characters, mechs, and soldiers into epic battles in open sandbox maps. Cover mechanics and dynamic destruction play a major role in combat,” said Theysen.

There’s no trailer as of yet, but Rozalski’s art below – and the screenshot gallery above – is more than enough to give you an idea of the sort of atmosphere the studio’s going for.

Iron Harvest is in development for PC, PS4, and Xbox One. It’s due for release sometime in 2018.